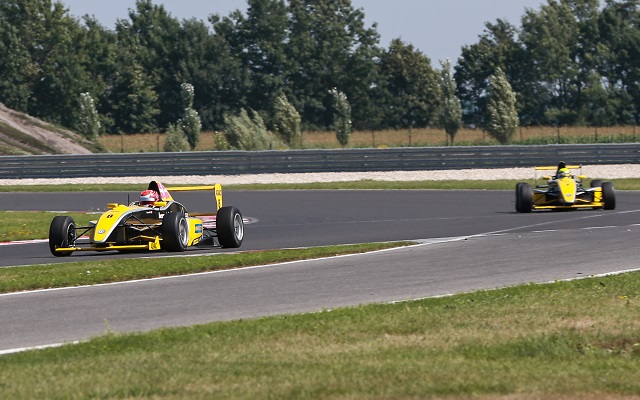 The Dane, originally set to start the race from pole but demoted three places due to a practice incident, recovered to take his fifth win of the season, while his main rival Maximilian Gunther failed to score.

Jensen’s teammate Tim Zimmermann inherited his career-first pole ahead of race one and got a decent getaway off the line, but was a sitting duck into turn one as the Lotus cars of Joel Eriksson and Dennis Marschall sailed past him.

Both Zimmermann and Jensen found a way past Eriksson by the end of lap one with Marschall holding the lead. Further back in the field, Mucke teammates Gunther and Kim-Luis Schramm made contact, also tagging out Luis-Enrique Breuer and bringing out the safety car, which would then leave the track at 14 minutes remaining in the contest.

Marschall briefly held the lead after the restart, but was soon forced wide by Zimmermann. Championship leader Jensen followed through a couple of corners later with a rather bold late-braking move and then subsequently eased his way past Zimmermann and into the lead.

From that point on, it was smooth sailing for the Dane, who managed to keep Zimmermann at a second behind and led a Neuhauser 1-2 at the line. Marschall narrowly kept Fabian Schiller at bay to score his first feature race podium, while Igor Walilko recorded his best result of the season in fifth.

Swiss driver Ralph Boschung struggled for pace in the latter stages of the race and had to settle for sixth, narrowly keeping Philip Hamprecht behind. Eriksson was muscled all the way down to ninth, but managed to clear championship hopeful Marvin Dienst on the final lap to take eighth, while David Kolkmann completed the top ten.

In the standings, Jensen now leads Gunther by 52 points, while Dienst, Boschung and Zimmermann are 90, 96 and 99 points adrift respectively.