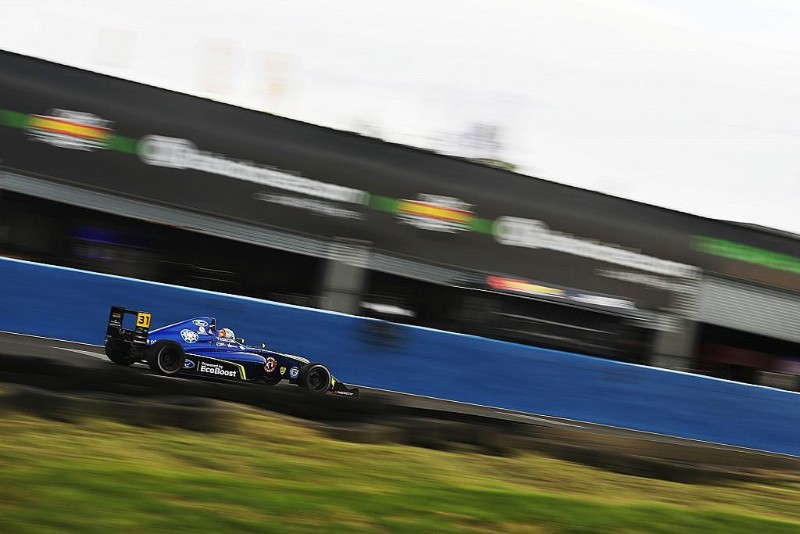 Zane Maloney extended his British Formula 4 points lead with victory in the opening race at Knockhill.

The Carlin driver managed two safety car restarts and a one-lap dash to the flag to convert pole into his first win since visiting Oulton Park in June.

Josh Skelton, who was promoted to second on the grid after a series of penalties, chased Maloney to the line.

He fell away from the Barbadian off the line, allowing Maloney to build a small lead before Double R Racing’s Louis Foster beached himself in the gravel and caused a safety car period.

When the race restarted with 10 minutes remaining, Maloney got the jump on JHR Developments driver Skelton and was again able to pull away from the rest of the field, only for the race to be neutralised less than four minutes later.

Fortec Motorsports’ Mariano Martinez and Arden’s Alex Connor had been battling at the back of the top 10 when they collided just after the hairpin, leaving them both stranded on the track. Elsewhere, Foster’s team-mate Reema Juffali, who had been running seventh, also fell off the track.

After a lengthy safety car period, the race resumed with just under a minute on the clock. Skelton stuck with Maloney on the second restart, but by the chequered flag had dropped 0.678 seconds back.

Faria and Horsten were among seven drivers excluded from qualifying after their teams were found to have worked on their cars in park ferme conditions. Martinez, Luke Browning, Tommy Foster, Connor, and Abbie Munro were all moved to the back of the grid.

Browning climbed up to seventh after a long battle with Foster, while Munro finished ninth on her F4 debut and was last of the finishers.