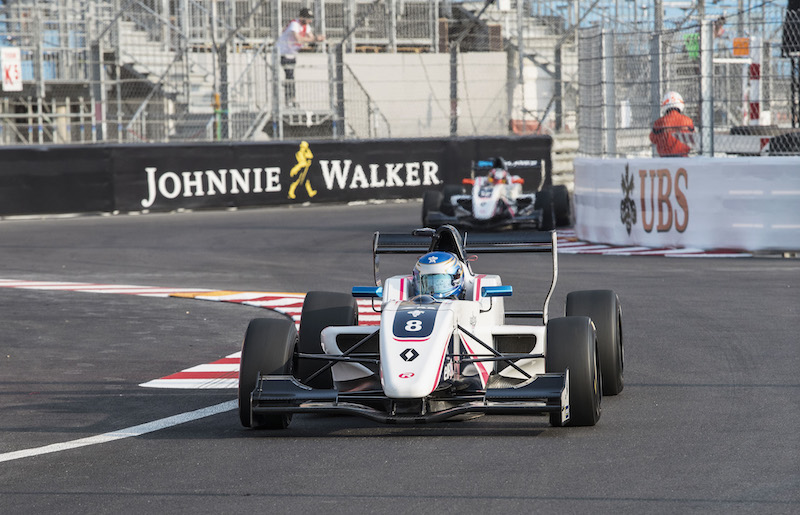 Will Palmer soaked up the pressure from Sacha Fenestraz to win the opening Formula Renault Eurocup race in Monaco and regain the championship lead.

The Briton made a great start from pole position to clearly lead Fenestraz into the first corner, but his advantage over the Franco-Argentine was as little as 0.4 seconds in the middle of the race.

In the latter stages he was able to pull away, finishing 1.6s clear as he secured his third win of the year.

The best action of the race was provided by Palmer?s R-ace GP team-mates Robert Shwartzman and Max Defourny in the battle for third.

The pair ran side-by-side up Beau Rivage on the opening lap, with Shwartzman managing to stay ahead on the outside line around Massenet.

Defourny kept the pressure on for the rest of the race, twice cutting the chicane in the middle of the race and then doing so again in the closing minutes, which allowed him to get alongside Shwartzman on the run to Tabac.

On the penultimate lap, Shwartzman went wide at Sainte Devote, enabling Defourny to come alongside up the hill and pass the Russian around the outside of Massenet.

Shwartzman had taken the championship lead away from Palmer by one point in Pau, but Palmer now takes a 12-point advantage into race two, when he will start second with Fenestraz on pole.

Red Bull junior Richard Verschoor produced his best Formula Renault performance to-date, with a brilliant launch getting him ahead of stable-mate Dan Ticktum before finishing only 2.6s behind Shwartzman.

UPDATE: Verschoor was judged to have jumped the start and handed a 10-second penalty, dropping him to eighth behind Ticktum, Peroni and Aubry.