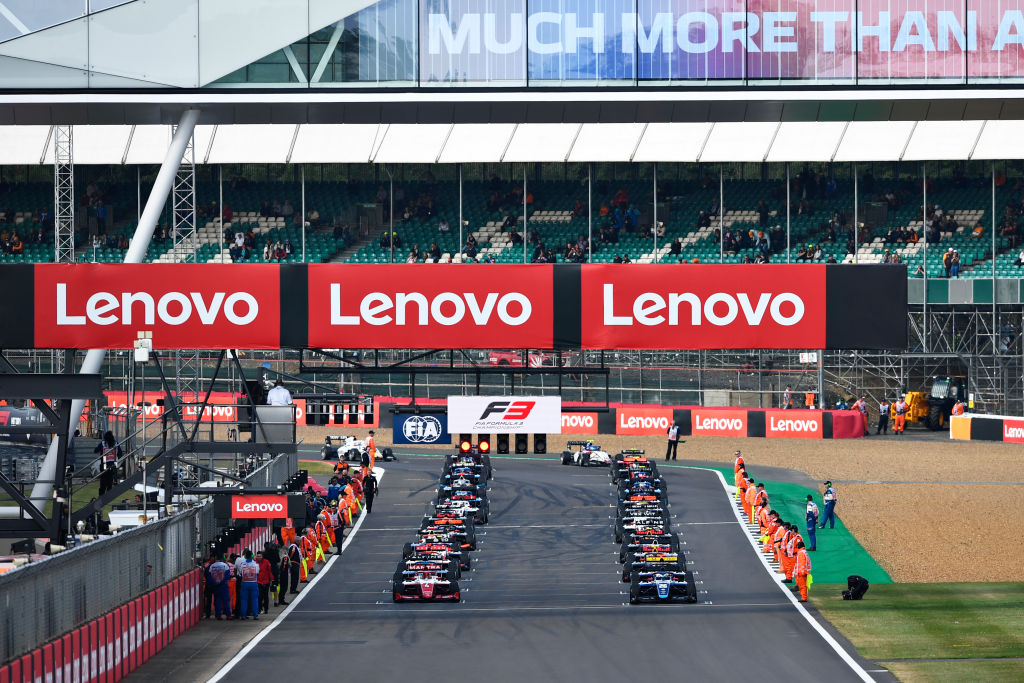 After nine rounds and 18 races, another FIA F3 season has come and gone. Who were the fastest drivers?

With each year, track limits becomes a bigger and bigger talking point in motorsport. In 2022, it was an issue that arguably went too far on the Formula 1 support bill as track limits violations contributed to the penalty point hauls that ultimately led to some Formula 2 racers being handed race bans, and also repeatedly led to drivers being penalised in the FIA Formula 3 Championship. Looking across the season, there were many instances where deleted laptimes due to track limits abuse made it tricky to tell a driver’s true pace in races. Had they gained a second by cutting a chicane? Or was running wide actually leading to a slower lap?

Ultimately, more than in any previous season, it rendered a comparison of race data tricky and often redundant when race stints were punctuated by deleted laptimes or huge swings of pace. Safety car interruptions meant there were only 11 of the 18 races where race stint data could reliably be used (with both Silverstone and Spa-Francorchamps races being omitted for this reason), and a few frontrunners had races where they exceeded track limits so many times, like Zane Maloney’s Monza feature race win, that those weren’t used to create averages. While the single-lap pace is indisputable, which for Formula Scout’s purposes means the fastest lap set by a driver in any dry session, there’s more of a question mark about race pace – particularly when traffic on track determines so much of how a driver’s race goes in the midfield – than ever before.

On outright pace, it is unsurprisingly the title contenders who were on average the fastest. Qualifying is so important in FIA F3 due to how difficult it is to overtake, but several times it has actually been the Friday free practice session where the fastest laps have been set and having used those for our averages when that has been the case (such as Reece Ushijima being fastest during the Spa weekend but qualifying 16th), it has provided a different picture than the average starting position of each driver for Sunday’s feature races. This gap between actual pace and grid positions became more evident later in the season in increasingly strategic qualifying sessions where some teams were caught out with their timing (and pitlane position), and others were denied pole-fighting opportunities by yellow and red flags.

The fastest driver on average by comparing to the fastest lap of each weekend was Trident’s Roman Stanek, who came fifth in the standings with a feature race win at Imola and pole position at Barcelona and was on average within 0.412% of the absolute pace. Despite being on pole in Spain it was at Imola where he was actually fastest, as champion Victor Martins – who thrice qualified on the front row but never on pole – set the Barcelona pace and was his closest rival on average pace.

Despite twice starting on pole, MP Motorsport’s Alexander Smolyar is only the 13th fastest driver on average, behind Campos Racing’s Oliver Goethe and Sebastian Montoya. Euroformula leader Goethe did the Hungaroring and Spa rounds in the team’s #21 car, then Formula Regional graduate Montoya drove it at Zandvoort.

Goethe qualified fourth on his second appearance and Montoya was seventh fastest for his debut, with the pair recording Campos’s best qualifying results of the year by some margin. When Hunter Yeany was in the #21 for the other six rounds, he qualified no higher than 16th.

There were big disparities in other teams too. Isack Hadjar won three races and claimed a pole on the way to fourth in the points with Hitech GP, convincing his backer Red Bull early on to promote him to F2 for 2023, and he was the fifth fastest driver of 2022. His team-mates Kaylen Frederick and Nazim Azman were only 21st and 34th on average single-lap pace.

Goethe and Montoya’s starring cameos meant Hadjar was lower down the average start position list headed by Trident pair Maloney and Stanek. Champion Martins was fifth place on that list, which was set by average each drivers’ nine qualifying results, and managed to score 108 of his 139 points in feature races despite an average starting position of 7.1.

Maloney scored only two feature race points in the season’s first half, but qualifying on the front row in each of the last four rounds contributed to a haul of 109 feature race points in the season’s second half and left him just five points short of the title. His qualifying average does include his 12th place at Barcelona, which didn’t actually stand as failing to stop for the weighbridge mid-session meant he was required to start from the pitlane for both of that weekend’s races. If ’12’ was replaced by ’30’ in the calculations, then Maloney would still have the second highest qualifying average at 6.2 rather than 4.2.

The top 12 from qualifying is flipped to form the sprint race grid in FIA F3, meaning to be in the top 12 is of huge importance to score points. Martins’ ART Grand Prix team-mate Gregoire Saucy was out of that more often than he was in it, and as a result scored points only four times through the year. 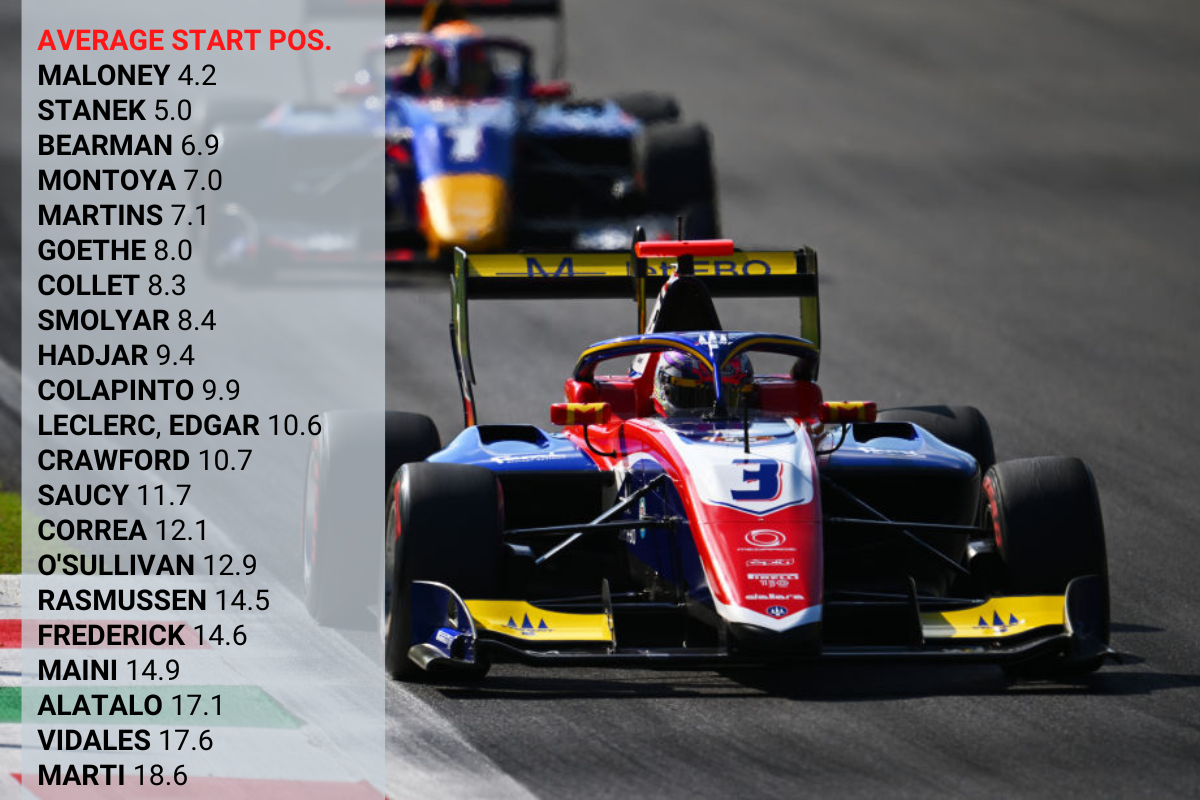 With the race data that is usable (that being a sample set of at least 10 consecutive representative laptimes) for comparisons, it’s pretty clear that while Prema may have had a qualifying deficit to Trident, it was the team to beat in races.

Ollie Bearman and Arthur Leclerc have the best averages for long-run pace over the season, while in third place is Montoya based purely off the Zandvoort sprint race. Only having one data point means Montoya shouldn’t be included in the grid-wide assessment, so in reality it’s MP’s Caio Collet who is best of the rest behind the Prema pair after he was the benchmark in the Hungaroring and Zandvoort sprint races and usually consistently quick in all the other ones.

Franco Colapinto was the star of Van Amersfoort Racing’s first season in the championship, with the rookie taking pole for his and the team’s debut and winning two races. Remarkably five of his eight points finishes were podiums, and he contributed 76 of VAR’s 91 points. He’s another driver whose form convinced backers to start their search for a 2023 F2 berth for him before the season was done.

Trident’s Jonny Edgar missed two rounds due to Crohn’s disease and on his return was super consistent but never quite reached the podium. Race pace was there, with two fastest laps, and his run of six consecutive points finishes was only matched or better by four drivers: Martins (seven races), Hadjar (eight), Crawford (eight) and Collet (seven).

There were six drivers who went into the final race in title contention, and the season ended so closely that had there been another rounded added there still would have been seven drivers fighting for championship honours. It was an incredibly close FIA F3 season, and one that like in F2 showed greater competitivity between teams than ever before after four years with the Dallara F3 2019 car.