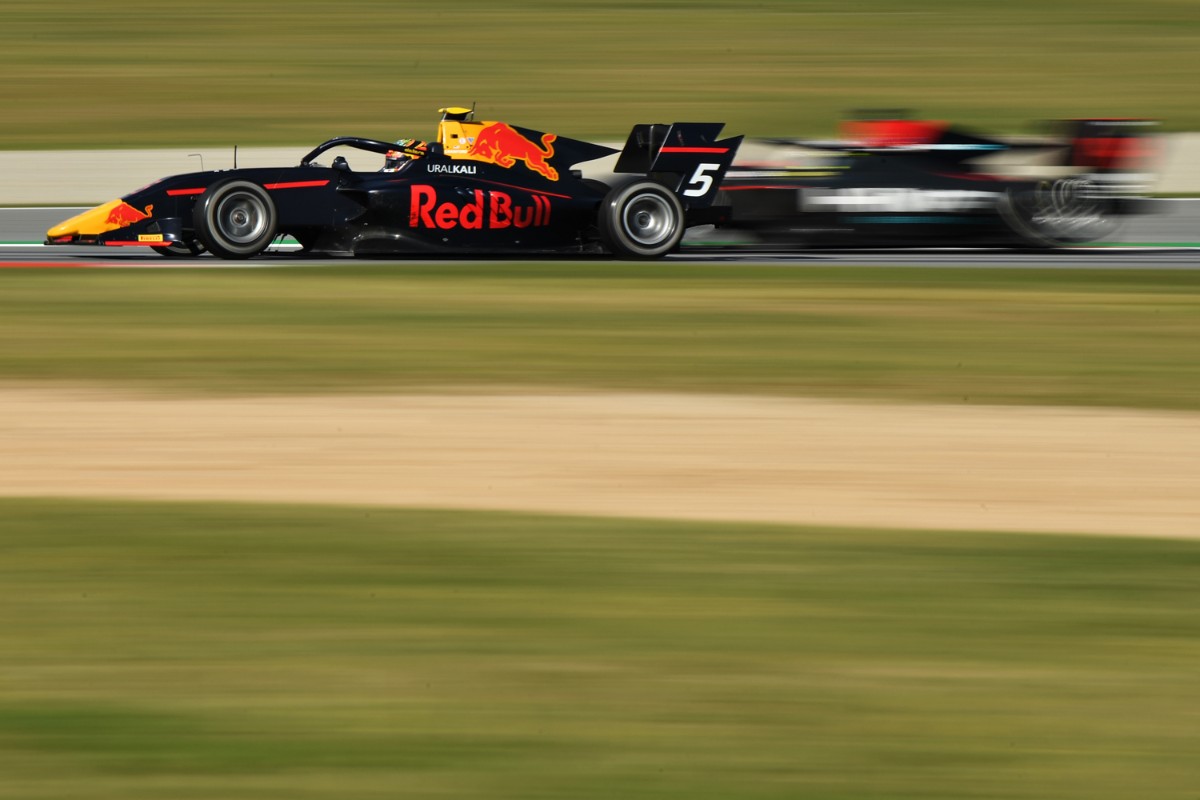 Delving into the data from FIA Formula 3 Championship’s two post-season tests in Spain indicates who might be moving where in 2021, and whose pace was potentially masked this year by being at the wrong team

Across four days and eight sessions, the first taste of next year’s FIA F3 season took place at Barcelona and Jerez, and in total there were 42 drivers who took part.

Race winners Frederik Vesti, David Beckmann, Jake Hughes and Bent Viscaal all returned to test, but Hughes has already announced his departure from the series and title contender Vesti has been hoping to move up to Formula 2 for 2021.

The opportunity for drivers to join different teams during the tests was evident actually in the success of the returning frontrunners. The points scored by just Vesti and Beckmann in FIA F3 this year was 286. The combined tally of the 17 other returnees at the test (including Hughes and Viscaal) was 277.5.

Vesti raced for Prema and Beckmann for Trident this season, and those two teams combined scored 734 points. The other eight outfits in the championship? 791 points. It was therefore pretty obvious where everyone wanted to be at during testing.

Prema ran two drivers it is expected to sign, Arthur Leclerc and Dennis Hauger, across all four test days while rotating the names that appeared in its third car. It also had very differing strategies for its test programmes at Barcelona and Jerez, putting less of an emphasis on race runs at the latter circuit as it is not a venue the series races at. As a result, it racked up the second lowest number of laps among the teams.

While Leclerc knows Prema well as he currently races for them in Formula Regional European Championship, Hauger was using the tests to focus on integrating himself into the team rather than race pace – having already got a year of FIA F3 experience under his belt with Hitech GP. 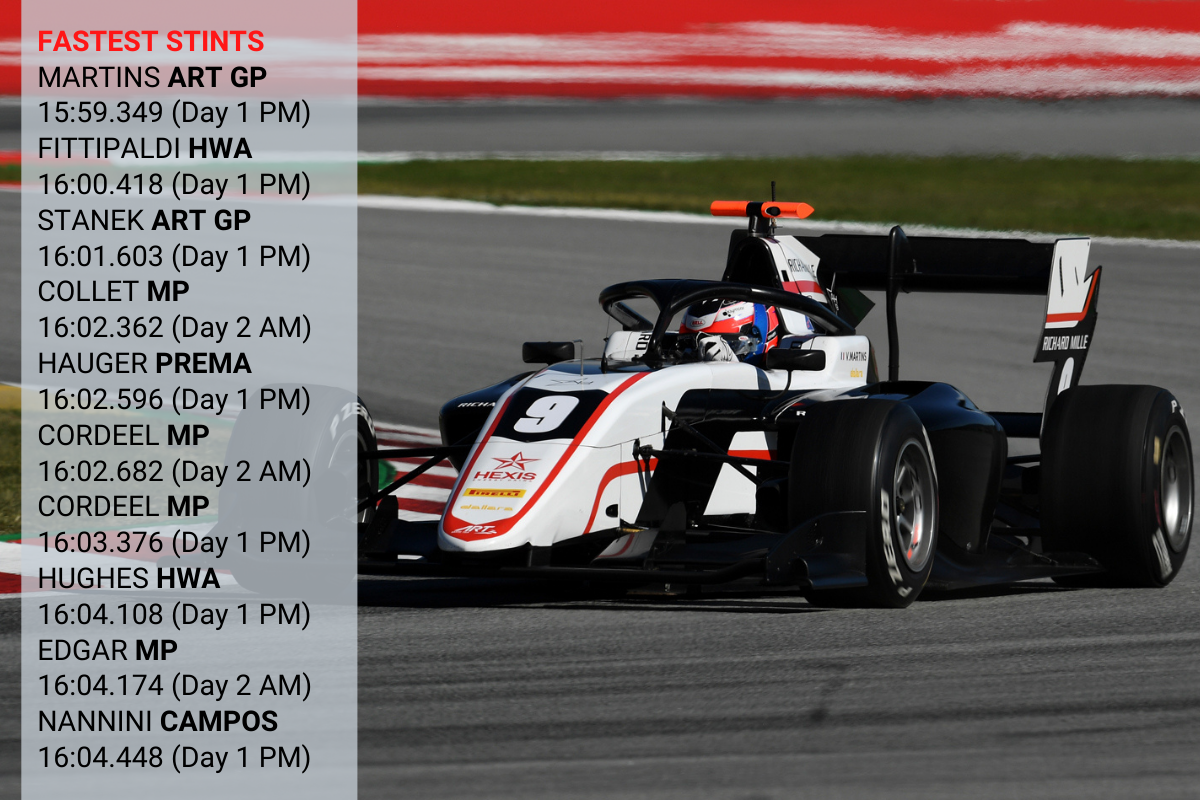 “It’s sort of a different approach there, so it’s just getting to know everything. But nothing is signed yet, so just testing,” Hauger told Formula Scout.

Pirelli’s hard compound rubber was chosen for Barcelona, and a full 22-lap race run was completed 16 times on the tyres over the two days at the circuit. Only five of the 10 teams elected to do this, with ART Grand Prix getting its drivers to do a full race simulation on each day and Prema doing the same (minus one lap for Leclerc) with its line-up.

However Formula Scout’s calculation method for race pace doesn’t utilise all 22 laps, especially when so few teams opt for such long runs, and instead groups together the best 10 consecutive laps in a stint to create a rolling average for race pace.

Using this method indicates the top 17 drivers were within a second per lap of each other on long runs, with eight teams represented. Formula Renault Eurocup leader Victor Martins was fastest of all for ART, with an average laptime of 1m35.935s – a pace that would have netted him the second fastest lap in either of the two F3 races at Barcelona this year.

Only 0.107s per lap slower in second place was HWA Racelab’s Enzo Fittipaldi, who caught the eyes of his rivals when he turned up in leaner shape than ever. HWA was usually able to get its drivers to do stints of 10+ laps back-to-back in the tests, and as a result it surpassed 1000 laps at the two circuits.

MP Motorsport had a similar strategy at Barcelona and it proved beneficial for its all-rookie line-up as three of the four made it into the top 10 for fastest stints. Martins’ Eurocup title rival Caio Collet, who actually missed the first day of the test, was 0.301s per lap off his on-track nemesis and was actually quickest on race pace on day two.

The sixth, seventh and 11th fastest stints were recorded by MP team-mate Amaury Cordeel, another driver from the Eurocup, while ADAC Formula 4 points leader Jonny Edgar’s stints in MP’s #18 car were the ninth and 12th fastest. 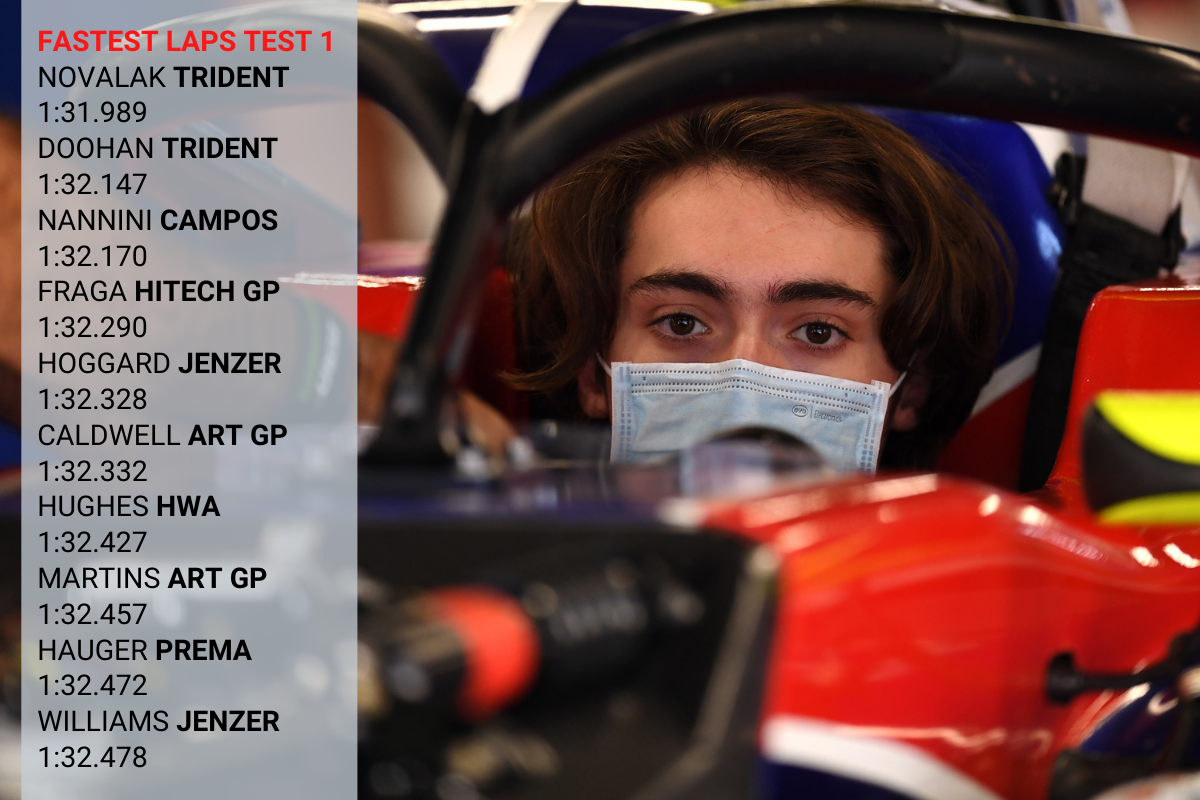 But the benefits of learning how the tyre degraded and changes in handling characteristics on a long run came at the expense of finding the maximum from the Dallara F3 2019 car on a low fuel load when the track was at its quickest: Edgar was 18th on single-lap pace and Cordeel was 22nd. The margin from the very front down to Cordeel was 1.098s.

Matteo Nannini spent the opening day of the test with Campos Racing and set the pace, and his benchmark lap from then was only beaten by Trident’s Clement Novalak and Jack Doohan on day two.

The story was similar at Jerez, but this time it was Doohan who bettered Novalak – by 0.019s – on the medium compound.

Despite the circuit not being part of the FIA F3 calendar, and being closest set-up wise to the Hungaroring which is already an outlier of a track, more 22-lap stints were were covered here than at Barcelona. There were 25 times where a driver completed the feat, most occurring in the final session when many were on race runs at the same time. If you extended the parameters to 23-lap stints (which would be closer to race distance at Barcelona), then it was still done 12 times.

Six teams went for the 22-lap option, with Prema the only team that didn’t even go for 10-lap runs. Such short stints wouldn’t have been down to a tyre management issue, as pacesetter Doohan explains:

“It started with quite low grip, but rear degradation isn’t too much of an issue given the right management.

“You have Turn 5 [a long right-hander] and Turn 8 [120° left-hander] which are the high-loaded corners. So if you take care of these then the traction will last good for the whole run.”

Based off Doohan’s feedback, it’s perhaps unsurprising that Trident was able to keep up the pace better than most over 10 laps. Hitech seemed to be on the ball with Jerez’s demands too, as F4 racer Jak Crawford went fourth fastest on single-lap pace and then bettered the closely matched Novalak and Doohan over a stint by 0.190s and 0.296s per lap respectively.

The next quickest were Nannini (Hitech), David Schumacher (Trident), Vesti (ART) and Johnathan Hoggard (Hitech), with the last of those drivers also breaking into the top 10 on ultimate and race pace on his day with Campos.

HWA didn’t get as close to the front as it did at Barcelona, but its drivers Pierre-Louis Chovet (who spent one day with Hitech at Barcelona) and Fittipaldi were two of only three to complete a 10-lap stint seven times during testing.

“We did quite a lot in the afternoon [on the final day] when it was hot. We did three runs on the first day and two on the second day, which was more for the drivers to understand the tyres [than performance],” Chovet said to Formula Scout.

“I learned more about the tyres especially, because this is quite important, and also the warm-up procedures. Let’s say the potential was really good at Jerez even if I didn’t put everything together, and during race runs I also improved on the management of the tyres to do an average laptime that was the quickest of my team – even in front of Enzo. It was nice.”

Oliver Rasmussen was actually the fastest HWA driver on race pace at Jerez, with the edge on Chovet by a miniscule 0.034s. Chovet was 12th fastest over a stint, and also on single-lap pace: 0.070s behind Fittipaldi and 0.587s off Doohan.

Chovet also set the most laps during testing, with his tally of 326 surpassing that of Hitech’s Igor Fraga by one lap.

Hauger was closer to the average race pace than he was to the ultimate race pace at Barcelona, and he was consistently the strongest Prema driver in each session. There’s no way of telling how quick he would have been on a race run at Jerez, not that it matters given it’s a test-only circuit.

Given the Hungaroring is Prema’s bogey track in FIA F3 and he was sixth fastest over a single lap on a circuit similar to it isn’t discouraging in the slightest, especially when you consider how dominant Prema has been in the past two years. 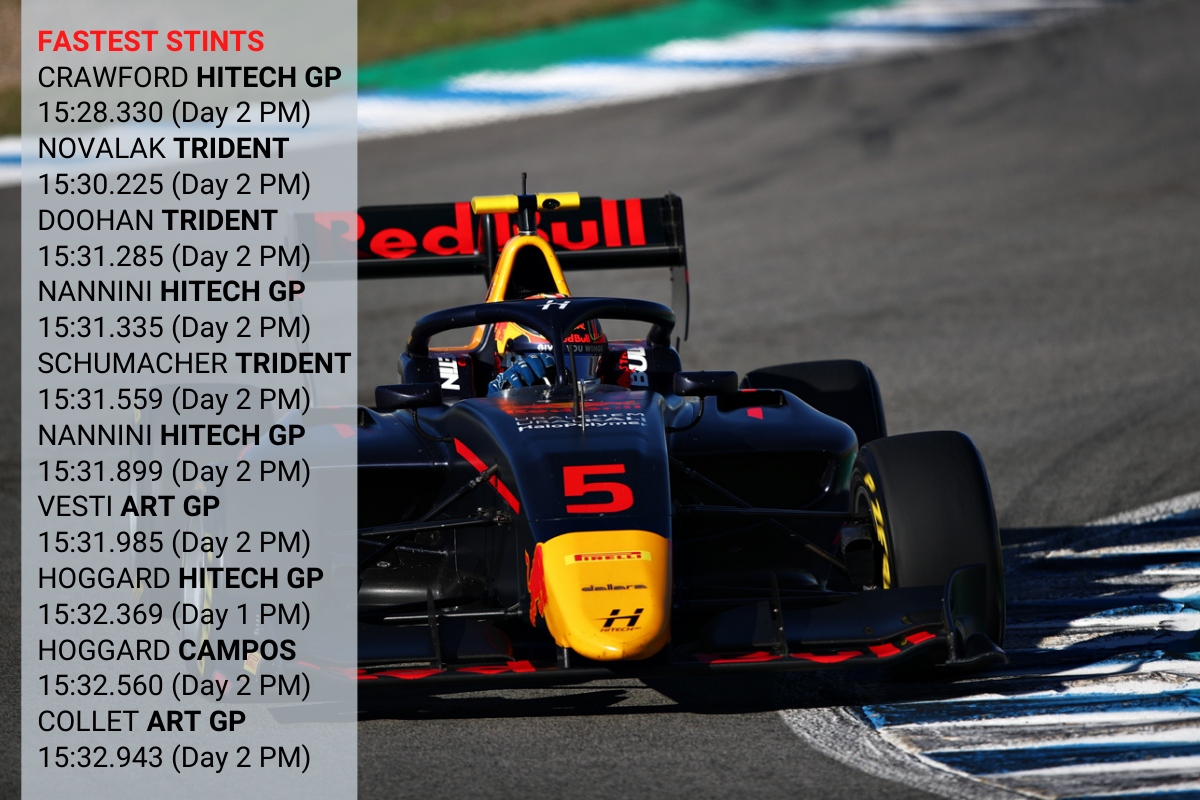 If he’s to join the Italian squad as expected, then he will likely reunite with Pedro Matos – who engineered him at Arden in British F4 and has worked with Frederik Vesti at Prema for the last two years – and continue an all-Red Bull junior rivalry with old F4 team-mate Doohan for the title as the Australian looks set to join Trident permanently.

As most 2020 deals were signed prior to the coronavirus pandemic, FIA F3 suffered from minimal disruption to its grid compared to the series just below it, but for 2021 it will be a lot harder to convince sponsors to put the money down for a series which has budgets that are closer to €1 million than €500,000 per season.

That those backed by Formula 1 teams are looking the most secure when it comes to finding a seat is not a surprise. Red Bull junior Igor Fraga is already basically confirmed at Hitech (with continued backing from the makers of Gran Turismo) after his attempted end-of-season switch this year, Leclerc is headed to Prema under Ferrari’s patronage whether he wins the FREC title or not, and stablemate Fittipaldi is likely to remain at HWA.

Renault junior Collet is bound for one of the top teams, and Red Bull’s F4 proteges Crawford and Edgar confident they will make the step straight up to FIA F3 in 2021 rather than contesting one of the Regional F3 series or Euroformula.

Novalak’s testing form with Trident suggests he will move to the Italian team from Carlin for his second season in FIA F3, and Olli Caldwell being at ART for all four test days after racing with Trident this season indicates he will be not only be remaining in the series next year, but also making the move to the French squad if budget allows.

The bigger unknown for FIA F3 next year is if it runs on different weekends to F2, and if that calendar would enable drivers to double up in other third-tier series. Either way, testing has put the spotlight on enough names to know that the third season of the championship definitely has a grid of drivers to look forward to. 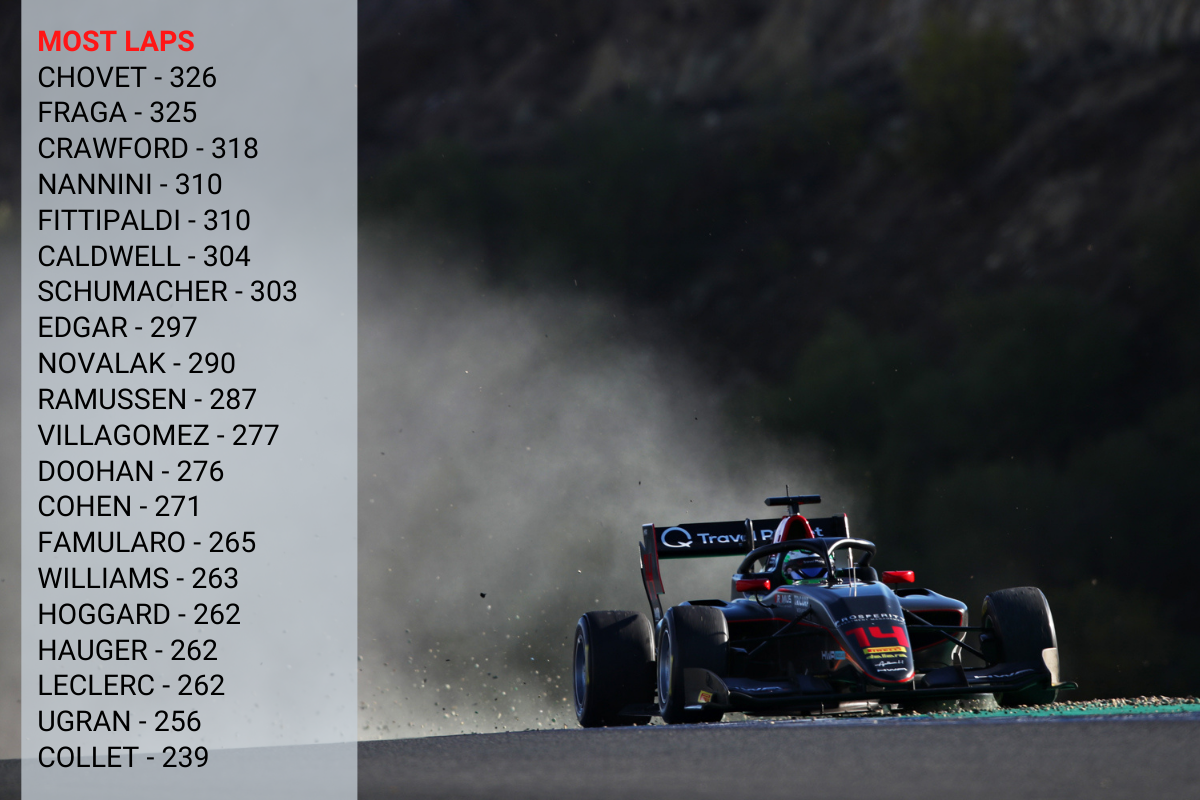 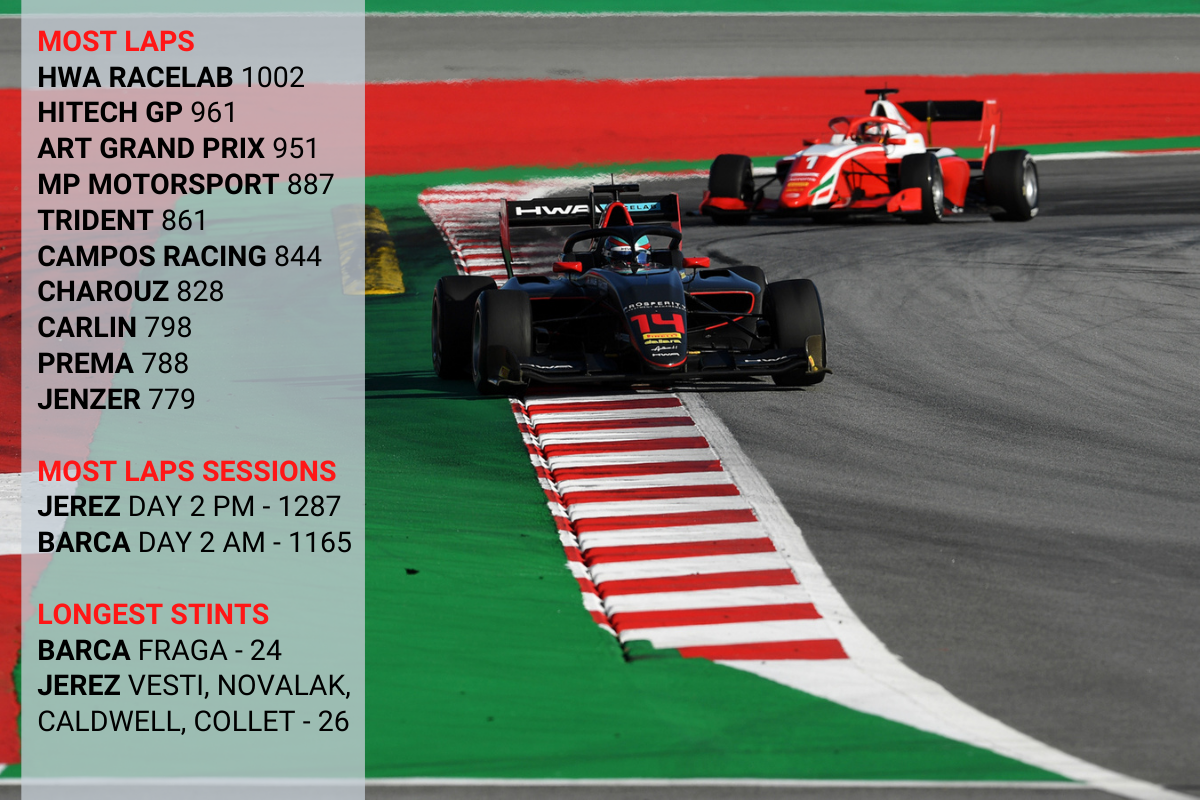