Home Featured Who is really fastest going into the second half of F2 2022?
FeaturesFormula 2 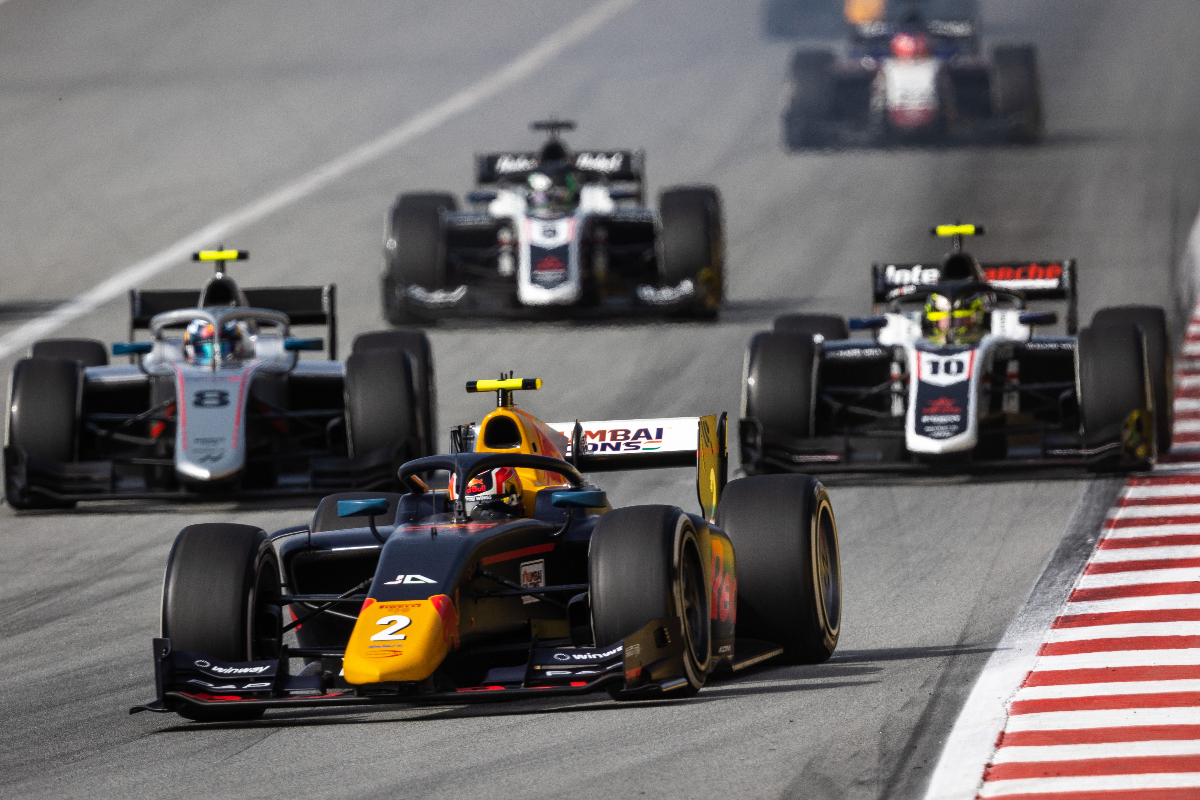 Title favourites haven’t quite delivered, and being strong in one area isn’t enough on its own for anyone to establish themselves at the front in F2. Felipe Drugovich is the completest package, who else comes close?

Oscar Piastri’s charge to the 2021 Formula 2 title as a rookie was built on an incredible run of pole positions that, even when he wasn’t quickest in races, put him in the strongest position for the highest-scoring ones.

The second half of the season was when the difference was made, so mid-season conclusions were of limited value. Or at least, even if you couldn’t predict the champion off the summer numbers, you could learn a lot about how each driver was truly faring. And it’s the same this year. Felipe Drugovich may have a handsome points lead as the driver who has matched consistency with pace, and some top drives, but there are other drivers who have been outstanding in individual areas.

Take, for example, this Juri Vips remark (no, not that one):

“Pourchaire, he’s only really been fast in Monaco and he’s won the feature races in Bahrain and Imola, while maybe being the seventh or eighth fastest on pure pace.”

Juri Vips thinks Felipe Drugovich and Theo Pourchaire are still catchable in F2, and gets frank about their pace. pic.twitter.com/KNBKq8bMHL

Vips’ comments were made several rounds ago, but it’s not inaccurate. Pre-season title favourite Theo Pourchaire is fifth on the average race pace from the first eight rounds (of 14), although omit Red Bull Ring-only entry Roberto Merhi and he’s fourth, and his qualifying pace is only the 12th strongest in the field.

Meanwhile Vips sits seventh on race pace and tops the table on single-lap execution. They sit third and eighth in the standings respectively, with Pourchaire ahead, but the lost points are easy to spot. Vips threw away a near-certain Baku feature race win by crashing out, and an engine fire put Pourchaire at the back of the grid for both Jeddah races, the latter of which he retired from with gearbox issues.

Omit Jeddah, where the pace improved significantly after Pourchaire’s engine expired, and he jumps up to fourth in the qualifying ‘supertimes’ on 100.490%, which is only 0.132% off Vips and 0.111% off Drugovich.

For Vips, the safety cars – one caused by his own crash – and pitstops during the Baku feature race broke up the action too much for race pace to be truly assessed as not enough consecutive laps were completed at racing speed. That means his strong performance there is not included in his season average, but he did take fastest lap by 0.204 seconds.

Hitech GP clearly has a car that inspires confidence on low fuel load, with that being a key factor in Marcus Armstrong’s two sprint race wins, but the qualifying form hasn’t always reflected the pace. Vips’ average starting spot for feature races is 3.63, but team-mate Armstrong’s is only 8.88 and he’s qualified outside of the top 10 more times than he’s been in the top five. However, look at pace rather than position and Armstrong is on average the sixth fastest driver this season.

“The thing that’s limiting me at the moment is my quali pace because I feel as though in the races we’re always very quick,” Armstrong said to Formula Scout last time out at the Red Bull Ring. “And it’s just a few too many mistakes in quali, by my own admission. The thing is it’s frustrating because the pace is there, if I could ever show you the data, the pace is there it’s just a matter of putting it all on one lap.”

Armstrong didn’t get to share his data, but Formula Scout had its own that proved his point and his pace. The picture isn’t too different to when the whole grid was last analysed following the second round in Jeddah, with the top eight looking fairly similar but with Carlin’s Logan Sargeant jumping from 15th to ninth on one-lap pace average, ninth to sixth on race pace and 11th to second in the championship standings.

He’s completed more racing laps than any of the other frontrunners, is the only driver other than Drugovich to get three consecutive feature race podiums, and like Pourchaire made an early exit from Jeddah qualifying so ended up off the pace there. In this case it was his fault to an extent, as he had a big crash on a treacherous track, and if you remove that weekend from the equation (and the unrepresentative 2.118s gap to his team-mate there as a result) then Sargeant would sit third on 100.474% and ahead of team-mate Liam Lawson. Carlin’s strength in this area is well known, but what makes this statistic particularly impressive is the switch between tyre compounds between practice and qualifying is still catching out drivers in their second and third years while Sargeant is a rookie and his average start spot is 7.63 even with his 18th place in Jeddah.

And what about Prema, winner of both titles in 2021? If McLaren’s faith in giving Red Bull junior Jehan Daruvala not one but two Formula 1 tests is anything to go by, there is at least one title dark horse in Prema’s line-up and it could be a case of the team finding explosive form with one of its cars during the second half of the season for the third year in a row.

Daruvala has matched Drugovich in consistency and mistake-free driving, but hasn’t contended for poles like Drugovich has as Prema simply isn’t the best on one-lap pace this year. In fact Daruvala has consistently started races in the midfield, with an average qualifying result of 8.75 and only one occasion  where he qualified higher than the grid’s fourth row.

But if you look at some of Daruvala’s race performances, a slight weakness in qualifying hasn’t punished him too much despite on average only finishing 1.267 places higher than he starts (excluding his mechanically-induced Barcelona feature race retirement). In Jeddah he charged from 14th to third, he’s led 43 laps this year, more than all of the title contenders bar Drugovich, and he could have won the Red Bull Ring feature race were it not for a penalty for trying to dry his grid spot. 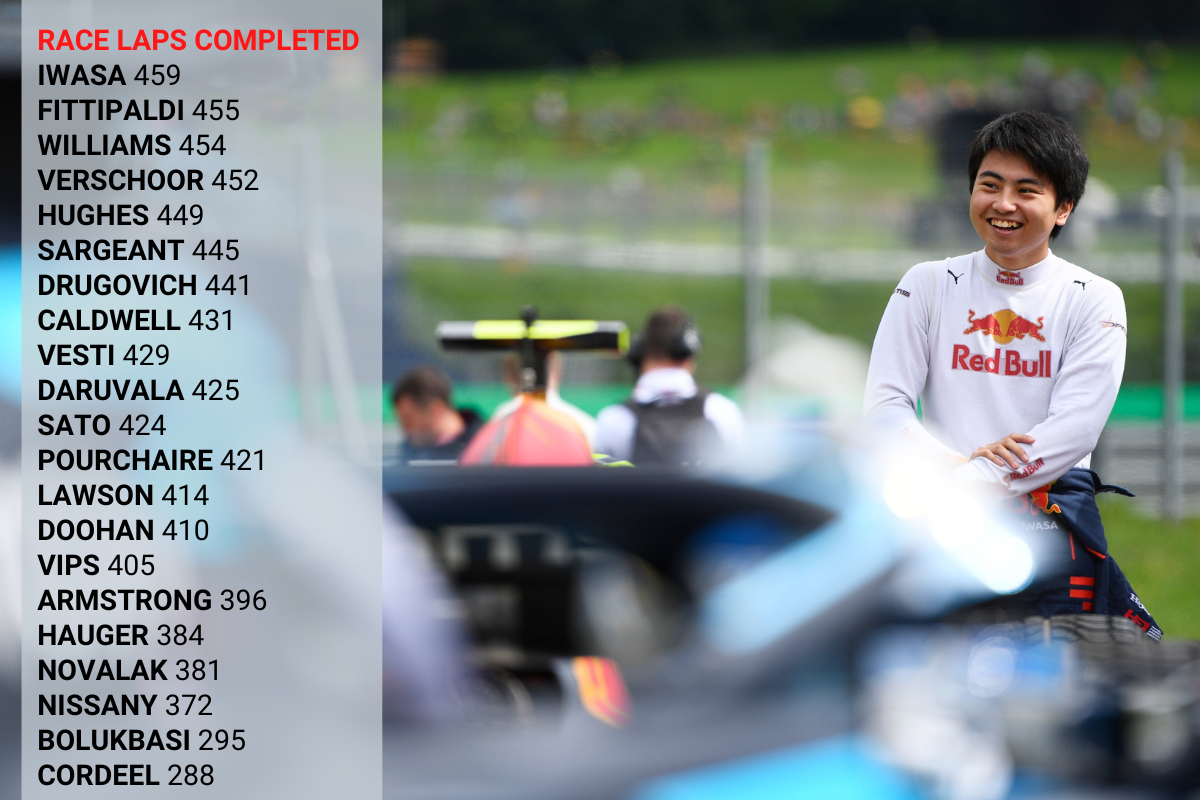 Dennis Hauger has also performed strongly in races in the second of Prema’s cars, and is now only 13 points behind his team-mate after getting promoted to fourth place amid all the penalties in the aforementioned Red Bull Ring race.

Too much of the action being spent behind the safety car meant there wasn’t enough usable data to use from the Jeddah sprint race or Baku feature race, while a wet track meant the Silverstone sprint race pace was almost 20s off that set in qualifying. But it was the most recent round where it was hardest to know the ‘true’ pace due to the high number of track limits violations. Some have been argued fiercely with the stewards, but the published documents from the weekend omit many laps and these documents are what Formula Scout uses for its rolling average calculations of race pace.

If a driver has done eight clean laps but then follows that up with three laps where they exceeded track limits, how representative are those laps? In the instances where the sensors have been triggered, and therefore a lap has been automatically deleted, but a driver has run so wide that they’ve clearly lost time then it should not be a problem to consider that lap. But where that’s not the case, then is it more representative to include the next lap in calculations?

Campos Racing duo Olli Caldwell and Merhi, Trident’s Richard Verschoor and Van Amersfoort Racing’s Amaury Cordeel all exceeded track limits so many times during the Red Bull Ring sprint race that there wasn’t enough laps grouped together where they didn’t that any calculations could be taken (not for the first time in Caldwell and Cordeel’s cases and contributing to their high number of penalty points this year), and in the feature race the Virtuosi Racing drivers and Cordeel had stints punctuated by a single track limits offence that did not show a pace gain and therefore did not totally invalidate the data.

There were an even larger group of drivers who did have a violation-free period, but also another time in the race where they were notably faster but that dataset wasn’t used because of one or two violations. DAMS’ drivers would have benefitted had the latter been used, as would Merhi who would have been the third fastest on the second race of his F2 return.

It wouldn’t just improve Merhi’s average from that one race, but because of how few races he has done it would then have made him on average the fastest driver racing in F2 this year…

Were it not for a contentious track limits penalty, Merhi would have won the feature race too although he has not actually led a lap. It’s the midfield drivers who position themselves well for top results in the sprint races that tend to be leading the most laps so far, with Verschoor and Armstrong both winning two on-the-road and as a result are four-time winner Drugovich’s closest rivals in the laps led chart.

Daruvala has led in four different races, a number which only Drugovich and Hauger (although he only led one lap in two of those) have exceeded, but he is yet to win this season. Carlin’s Lawson meanwhile has only been at the front for three laps all season, and they all came at the end of the Jeddah sprint race where he looked after his tyres better than VAR’s Jake Hughes to pass the Briton and take the win.

But that race has become the exception rather than the norm for Lawson, who was tipped by many pre-season to win the title. He has had four retirements, only five races in 16 where he has finished higher than eighth (although all five are podiums) and more than half of his points came in the first three races when he actually topped the standings.

Since then his team-mate Sargeant has outscored him by 80 points, with Sargeant scoring only one less point in the most recent race than Lawson has in the past 13 combined. 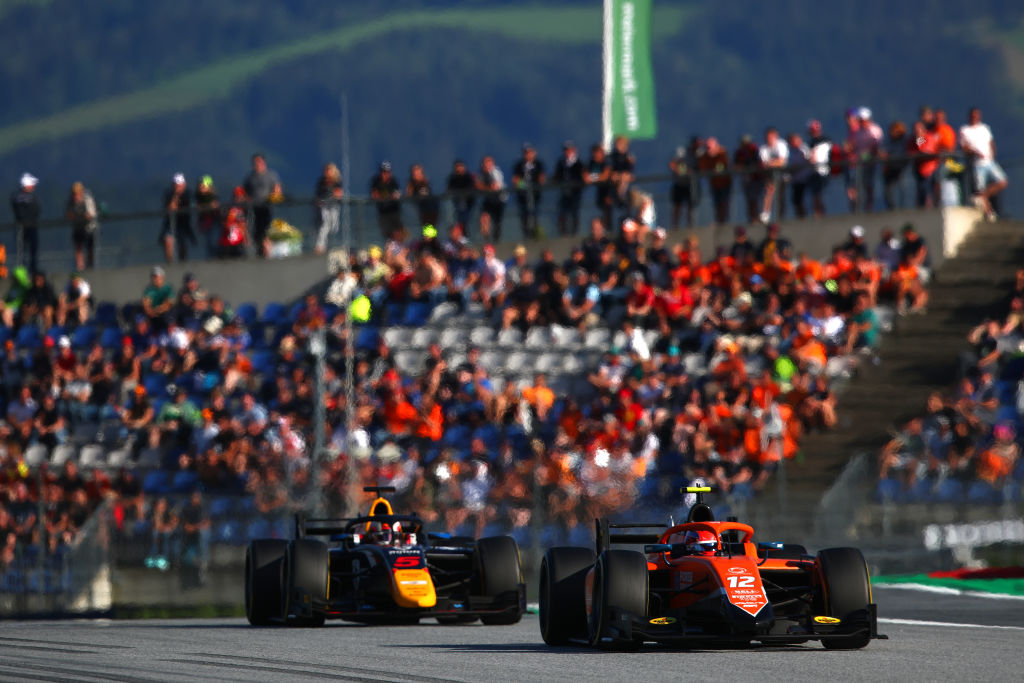 The three drivers ahead of Lawson on single-lap pace have led 175 laps between them, and may suggest a mentality change is needed in Lawson’s camp if he’s to put his name back towards the top and in contention for a future AlphaTauri F1 seat.

The last driver with a story to tell is Clement Novalak. He is team-mate to Drugovich at MP Motorsport, which is at the top of the teams’ standings despite its second driver only scoring twice. Once dubbed ‘Mr Consistent’ due to his route to success in GB3 and FIA Formula 3, Novalak has been occasionally rapid but more often erratic since stepping up to F2 and one of many to struggle with the switch between compounds during weekends. On the one-lap pace average he’s ahead of only one other full-time driver, his race pace positioning isn’t much better either, and the only full-timer to have been out of the points as long as he has is Trident’s Calan Williams, who came to F2 after finishing 19th in FIA F3 while Novalak was third.

As Formula Scout will explore later this year, there’s a reason why MP has become the team to beat in F2 this year. But it could lose out on both titles if Novalak doesn’t up his game.