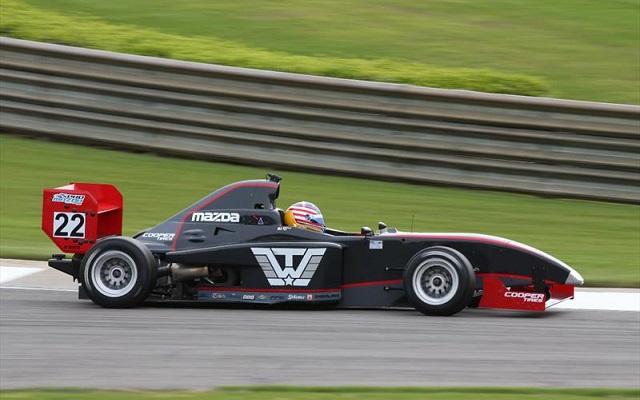 Andretti Autosport’s?Weiron Tan?took a commanding flag-to-flag victory in the first Pro Mazda Championship race from Barber Motorsports Park on Saturday, leading all 20 laps in the first 30-minute sprint race of two to be held this weekend.

An ugly first attempt at a race start was aborted, as a result,?Kyle Connery was eliminated from the race in the fracas after spinning off track and suffering terminal damage. The?second start attempt was then aborted when?Timothe Buret jumped ahead of Tan at the start.

Finally, the third attempt produced a clean start, as Tan controlled the pace ahead of Buret, with Santiago Urrutia?leading a three-car pack of?Neil Alberico and?Patricio O’Ward.

Further back, Tan’s teammate?Dalton Kellett?and Jose Gutierrez?suffered separate incidents on the first lap, with Kellett veering off course after a puncture sustained from Gutierrez, who spun off later in the lap and eventually retired due to suspension failure after just five laps.

The most compelling battle of the race was for sixth, headed by?Raoul Owens who moved all the way up from 13th on the grid to sixth place, ahead of Juncos Racing’s?Garett Grist. Outgoing USF2000 champion?Florian Latorre was motivated to move up the field, making one of the few passes of the race on lap 12 when he got around?Will Owen.

As they battled, Tan was unchallenged at the front, opening up his lead over Buret to as much as 2.5 seconds and never looking back as Tan became the first Malaysian driver to win a race at any step of the Mazda Road to Indy.

Buret claimed the fastest lap bonus point with a 1m21.548s set on lap 17.?Urrutia did enough to resist early pressure from Alberico and held onto third place to complete an all-rookie podium. The Uruguayan recorded his fourth straight top-5 finish to open the season – and moved to within two points of Alberico for the championship lead. 15-year-old O’Ward rounded out the top five finishers.