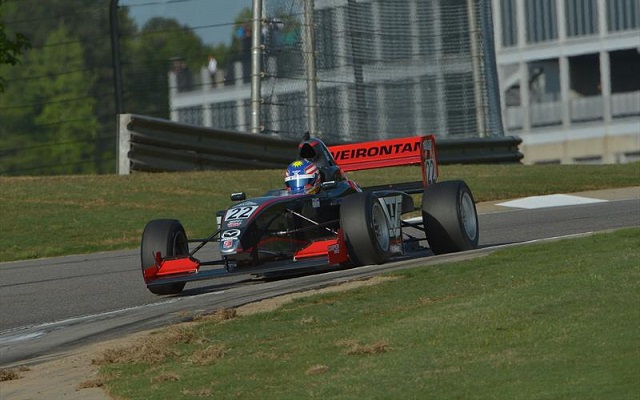 For the second consecutive Pro Mazda Championship race, Malaysian star?Weiron Tan claimed pole position, setting the fastest lap in a truncated qualifying session at Barber – with the top eleven cars in the field separated less than one second.

Tan put his number 22 Andretti Autosport entry on the pole for Saturday morning’s first race with a lap time of 1:21.212 to beat out Frenchman?Timothe Buret?of Juncos Racing, who will start on the outside of the front row, fresh off his first podium finish of the year at NOLA Motorsports Park.

NOLA race winner?Santiago Urrutia will start third, alongside his 15-year-old Team Pelfrey teammate,?Patricio O’Ward – ensuring an all-rookie lockout of the first two rows of the grid.

Reigning USF2000 champion?Florian Latorre celebrated his 18th birthday today by getting right to work and qualifying in ninth, ahead of the second Andretti Autosport car of Canadian?Dalton Kellett.

A red flag came out with six and a half minutes remaining in the session due to JDC Motorsports’?Kyle Connery?spinning off track at Turn 3. ?His car was beached, and with it, his fastest lap of the session was revoked. He will start 12th.