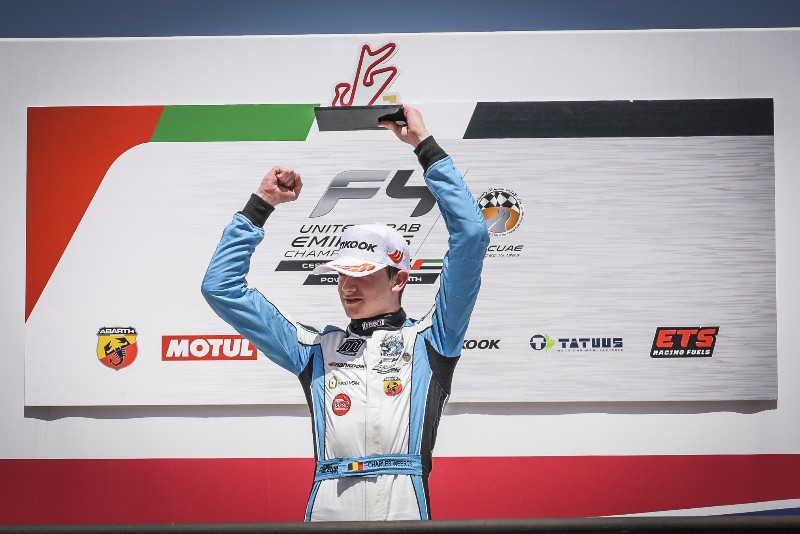 Charles Weerts became the 2017-18 Formula 4 UAE champion in style at Dubai Autodrome, winning all four races of the series finale to see off the challenge of David Schumacher.

Dragon with Motopark driver Weerts and his Rasgaria with US Racing rival Schumacher came into the final round of the season separated by just 13 points.

Weerts’ weekend got off to a dream start, taking both poles and leading every lap of the first race to take his fifth victory of the year ahead of Schumacher and?Tom Beckhauser, who returned to the podium for the first time since the series’ last visit to Dubai back in January.

Weerts won the race by 9.977 seconds, but a post-race penalty for a jump start reduced his winning margin by five seconds.

The second race saw Weerts come from sixth position on the reversed grid, to take the victory ahead of Beckhauser and?Lucas Petersson.

Debutant Jake Dalton, once a rival of GP3 driver Jake Hughes in BRDC F4, led the opening five laps from pole position before a broken steering arm forced him to retire.

The third race was won by Weerts, who finished 8.052 seconds ahead of Schumacher. Elsewhere, Roy barrel-rolled after contact with Petersson. The German retired, while Petersson was sent to the back of the grid for the final race.

Amaury Cordeel crashed into the pit straight wall under yellow flags, prematurely ending his charge. The chaos handed Dalton a podium in his third start, with?Morricone,?Beckhauser and Petersson rounding out the finishers.?

Weerts comfortably wrapped up the drivers’ championship with a race to spare and put his Dragon team in a great position to win the teams’ title in the final race of the season.

The Belgian made it four out of four in the final race, charging from fifth to first to confirm the teams’ title as well as his drivers’ title.

Holding the championship lead ever since the opening round, Weerts took eight wins on his way to his first major single-seater title. He will participate with Van Amersfoort Racing in his second season in ADAC F4 this year.

“I’m really happy about this,” he said after winning the title. “I’ve put quite a bit of effort into it and it’s a boost in confidence for the season ahead in Germany.

“Like every rookie you make mistakes but with a lot of practice here in the UAE with practice starts, and a lot of races, I made good progress during the year.”

Schumacher earned his?16th podium of the season in third place and picked up the rookies’ title. The German missed the opening round of the season, before making his F4 debut at the second round at Yas Marina.

“I missed out the first of the six weekends so I think I can be really happy with how far I came. Big thanks to everyone a US Racing and my father [Ralf] for always?supporting me and helping me to learn a lot in my first F4 championship.”

Schumacher was beaten to second place in the final race by Dalton, who rounded off a promising return to single-seaters.

Beckhauser finished in fourth place to secure third in the drivers’ championship, with?Morricone and Petersson the final finishers of race four in fifth and sixth place.