Weekend Preview: Macau brings the curtain down on 2011

This weekend sees the last major race of the junior single-seater season,? and its probably the most famous ? the Macau Grand Prix.

The first Formula 3 race around the streets of the former Portuguese province was won by a driver by the name of Ayrton Senna. Ever since then it has been the race that all young drivers want to take part in ? and win.

This year?s running sees a 30-car grid of hungry young drivers. PaddockScout guides you through each of the runners?

Wittmann began 2011 as the favourite for F3 Euro Series glory after finishing runner-up last year, but was unable to contend with Roberto Merhi. He will hope to get the upper hand on the Spaniard here and leave F3 on a high, and his win on the tight streets of Pau suggests that he could.

Vanthoor was another driver of whom slightly more was expected this year. After winning the German F3 title in 2009, the Belgian driver has failed to win a Euro Series race in two years. Finished second in Macau last year, but improving on that looks unlikely on his 2011 form.

Son of the DTM team boss, Abt made his international racing debut at Macau 12 months ago after graduating from German F3, and led the big event until crashing out. He has been unable to repeat that pace all year in the Euro Series, only managing a handful of podium finishes.

After finishing ninth in last year?s Euro Series, Colombian Munoz could only improve on that position by one despite making a switch to the champion team. With just two podium finishes all year, he is the least likely of the Signature quintet to pose a threat to victory.

Red Bull Junior Sainz will be stepping up to British F3 next year, hoping to follow in the footsteps of Alguersuari, Ricciardo and Vergne. Qualified third on his Euro Series debut at Hockenheim, even if luck deserted him in the races. Has form at Macau, winning in FBMW last year.

At 28-years-old, Yasuda is a veteran of the Japanese F3 series, missing out on the 2011 title by just a single point. This will be his debut in Macau. Also races in the Super GT series, where he won the GT300 class in 2008.

Brazil?s Nasr won this year?s British F3 title at a canter. No driver from the British series has won in Macau since Mike Conway in 2006, but Nasr will hope he can put that right. He finished 11th last year.

Magnussen matched Nasr for wins this year, but a lack of consistency with more than his fair share of bad luck meant he ended up 80 points adrift. Has already committed to Formula Renault 3.5 for 2012, after strong testing form.

Another Colombian driver, Huertas scored consistent top five results throughout his third season of F3 in 2011, but took until the very last race to pick up his first win in the category. Has previous results of 12th and 10th in Macau.

Formula BMW Asia champion in 2007, Petronas-backed Malaysian Jaafar showed good improvement in 2011, his second year of British F3. Has been testing in FR3.5 recently and graduating there looks a good option. Looking to improve on his result of 14th in Macau last year.

The Spaniard starts his final F3 weekend as the overwhelming favourite after his dominant year in the category, winning the Euro Series and the new FIA Trophy. Has plenty of experience in Macau too with three previous starts, but eighth last year is his best result.

Although in the shadow of his compatriot and teammate all year long, Juncadella has shone in the Euro Series with four wins. Retired on his Macau debut last year, but should be a contender for a podium finish this time round. 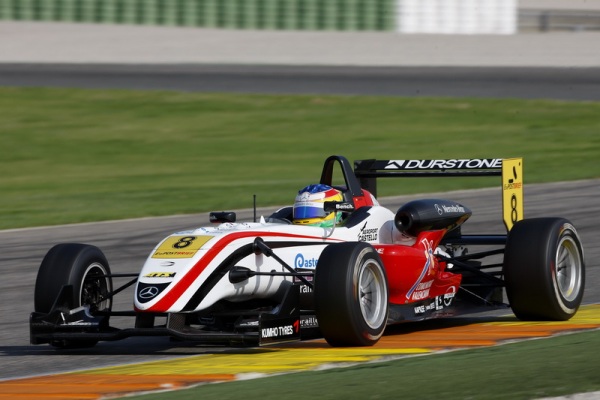 Roberto Merhi has been the man to beat in F3 in 2011 - Photo: F3euroseries.com

23-year-old Yamauchi finished third in this year?s Japanese F3 Championship, his second year in the series? top class. This will also be his second start at Macau, after finishing a strong 13th place in 2010.

Sims returns to F3 after a GP3 campaign that ended in disappointment after leading the standings in the middle of the season. His Toyota-supported team have won Macau in both 2007 and 2008, and have carried fellow Brits Peter Dumbreck, Darren Manning and Oliver Jarvis to victory since 1998.

London-born, Singapore-based Bradley won the Formula BMW Pacific title in 2010 ? his first year out of karts. Finished fifth in Japanese F3 this season, racing against the far more experienced local drivers. Got some street experience when he raced at Pau with Carlin earlier in 2011.

Northern Irishman won on three occasions in British F3 in 2011 ? his second year in the series ? finishing fourth overall. Finished 15th in Macau last year, but won in a guest appearance in Formula BMW at the GP in 2009.

Brazilian driver Foresti began 2011 amongst the leading contenders in British F3, with wins at Oulton Park, Snetterton and Brands Hatch. Things tailed off in the second half of the year though, as he slipped to seventh in the final standings.

Swedish driver stepped up from German F3 to Euro Series for 2011 and was scoring regular podiums until he won the prestigious non-championship Masters of F3 race at Zandvoort. Finally scored first Euro Series win at season finale to finish fifth overall. Ninth at Macau last year.

A late replacement for the injured local driver Michael Ho, the 23-year-old won the Japanese F3 title this year. Previously appeared in GP2 Asia at the end of 2008. Finished 20th on his Macau debut last year. 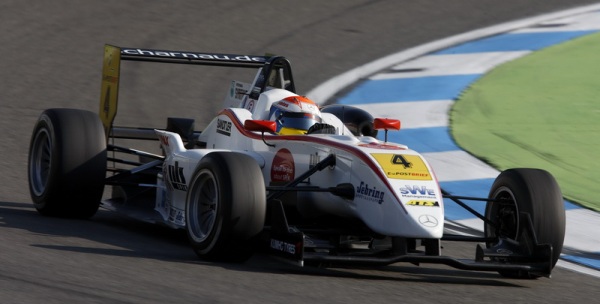 Felix Rosenqvist will aim for a repeat of his win in F3's other flagship event - the Masters. Photo: F3euroseries.com

19-year-old Brazilian finished eighth in his first full season of British F3 this year after coming across from South America. Standout weekend was Rockingham, where he took a double pole position and one race win.

After being the top rookie in the F3 Euro Series in 2010, Felix da Costa switched to GP3 this year. After showing strong pre-season pace his campaign was a letdown, but did salvage a victory in the season finale at Monza. Also scored three podiums from six mid-season starts in British F3.

Dutchman van Asseldonk competed in his second year of car racing in 2011, finishing fifth overall in German F3 after graduating from Formula BMW. Also appeared at the British round at Spa, finishing one of the three races in fourth place.

A prot?g? of Mark Webber, the Kiwi shot to prominence by winning at only his second European race weekend in GP3 at Barcelona at the age of just 16. A point-less run in the second half of the season saw him fall from the points lead to ninth. Made F3 debut at Silverstone ahead of Macau.

After becoming British F3 champion in 2007, Estonian Asmer?s career never took off. Now 27, he made his F3 return at Pau this year and also raced at British round at Spa. This is his fourth Macau ? he finished in fourth place in 2007.

GP3 champion returns to F3 for one last shot at glory. Finished third at Macau last year and fifth the year before. Won on his return to F3 at Donington Park in September, which he did as preparation for Macau. Tiredness could be a factor, after flying straight to Macau for free practice after completing his test for Williams.

Swedish driver Eriksson finished ninth overall in his debut F3 Euro Series season in 2011, with a best result of fourth. Last year he raced in German F3, coming sixth. This will be the 20-year-old?s Macau debut.

21-year-old Sato switched to the Euro Series for 2011 after two seasons in Japanese F3. He finished tenth overall this year, but won a reverse grid race at Zandvoort as well as a podium in Valencia. Was 24th on his Macau debut last year.

21-year-old Canadian-born Hong Kong driver has raced in F3 for the past four years, with two seasons in Germany followed by two in Britain. Fong made his Macau debut last year and finished 21st.

Welshman has raced in British F3 for the past four years, with a best race result of fifth place. He previously won the BARC Formula Renault Series in 2007. The 26-year-old made his Macau debut last year, finishing 23rd.

Kiwi blew the opposition away in German F3 this year, and also won on his GP3 debut at Spa. His success on his Macau debut could depend on how well his Dutch team can get up to speed with running the latest Dallara chassis, as opposed to the older ones used in Germany.