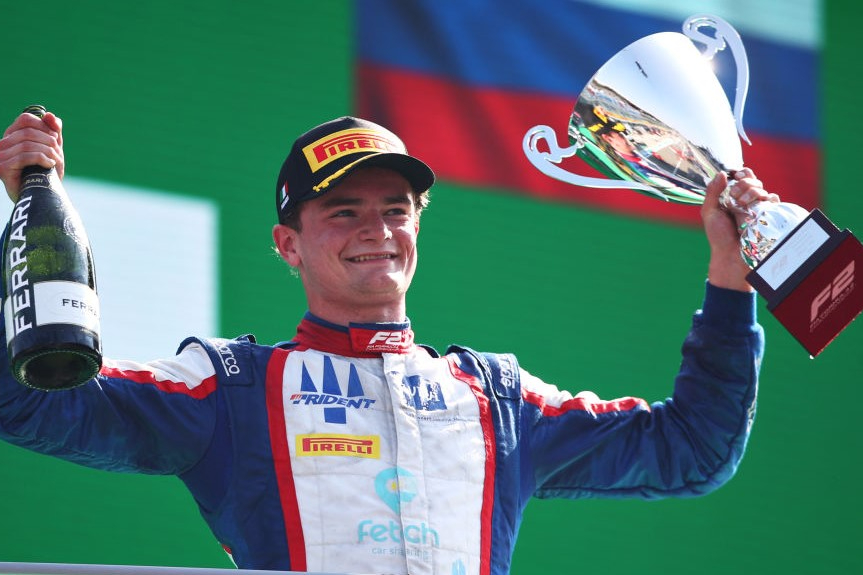 Bent Viscaal says Trident has the potential to be an Formula 2 title contender after he claimed the team’s first podium in Formula 1’s primary feeder series since 2016.

The Italian outfit has struggled in the modern F2 era, with a best finish of fifth prior to this season and having finished last in the teams’ championship four years in a row.

Viscaal finished fourth from reversed grid pole in the second Baku sprint race earlier this year, then came second in the equivalent Monza race to claim his and the team’s first F2 podium. Formula Scout asked Viscaal about the rise up the order.

“The journey, of course, started in post-season testing in Bahrain [last December],” he said.

“Unfortunately I did only half a day, and I only knew I was going to drive in Bahrain [the 2021 season opener] two weeks before the event. So it was a bit last-minute. But after that I wasn’t sure if I was going to continue with Trident for the rest of the season, and from there on we just started working, a lot of days in the simulator, a lot of days spent with the engineers.

“I pretty much lived in Milan for a few months just to get everything sorted out. Just a lot of things still to work on, especially the qualifying performance as I just mentioned.

“As long as we are in a good position from the start onwards, our race pace is more than strong enough to stay within the top five and also to be on the podium. But if we really want to be consistently [in the top three] I just need to do a lot better in qualifying and not be around P15, but that’s pretty obvious.”

Trident is a title contender in FIA Formula 3 with Jack Doohan, and snatch the teams’ title from Prema in this weekend’s Sochi season finale. Viscaal feels that the potential showed there can be showcased in F2 as well.

“I just think it’s having a bit of patience because you can also see in F3 that they are championship contenders and they are a really competitive team.

“Also, in the past, they have been very competitive. So, I’m really impressed by the way they work, very professionally. We just had to start a bit on the back foot, especially in quali where we’re still not quite there. But I do definitely believe that the structure is there to become a top team, hopefully as soon as possible.”

Viscaal has scored 23 points to his more experienced team-mate Marino Sato’s one, but their combined tally puts Trident comfortably ahead of HWA Racelab in the F2 standings and just behind Charouz Racing System with three rounds to go.