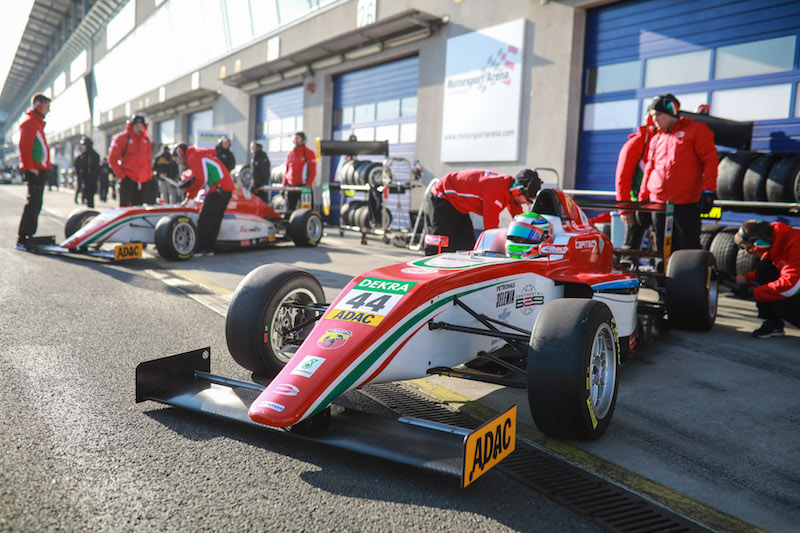 Juri Vips took victory in the opening round of the 2017 ADAC Formula 4 season at Oschersleben after overtaking Nicklas Nielsen with two minutes left.

Nielsen took the lead at the start of the race past slow-away pole-sitter Felipe Drugovich, making a move into the tight Turn 1 to lead ahead of Vips.

He looked like he was going to control the race, building a gap of about a second until the safety car was deployed after Tom Beckhauser had lost his front wing before ending up off the track and into the tyre barrier.

Once it returned to the pits, Nielsen again built a gap of about a second from Vips.

However, with only a few minutes left of the race, Vips got himself ahead of Nielsen after the long, sweeping right-hander of Turn 2.

Jonathan Aberdein held on to take the final podium spot despite a race-long challenge from Drugovich, although the Brazilian received a 30-second penalty for abusing track limits and was classified 21st.

Fabio Scherer therefore took fourth ahead of Juan Manuel Correa and Julian Hanses, who battled for fifth towards the end of the race before Lirim Zendeli then battled Hanses for sixth.

In the end, Zendeli came home seventh ahead of Oliver Soderstrom, Marcus Armstrong and Kami Laliberte.

Charles Weerts was the top rookie with a 12th place finish.

Gaps throughout the field stayed relatively the same, with not much in terms of overtaking happening. One driver who did make progress, however, was Sophia Florsch.

Initially third fastest, Florsch had been disqualified from qualifying after a technical infringement. She therefore moved to the back of the grid for the start of the race, but made her way up to 15th place at the chequered flag.