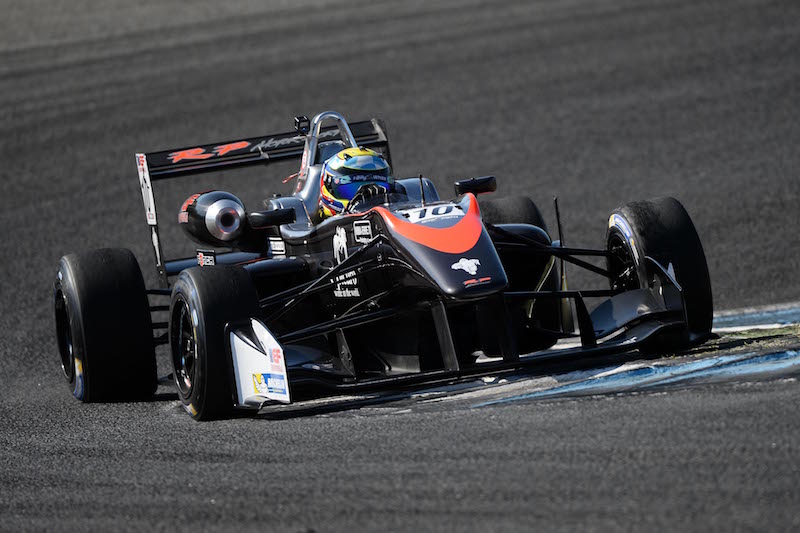 Harrison Scott took victory?in the season-opening Euroformula Open race?race at Estoril, resisting Ameya Vaidyanathan for much of the distance.

Scott did not make a good start from pole position, losing position to Nikita Troitskiy and nearly losing out to Vaidyanathan, but kept with the Russian driver during the first lap.

The new season took all of four corners before significant contact brought out a safety car, following an incident between Daniil Pronenko and Pedro Cardoso. Behind the safety car, Thiago Vivacqua’s race ended early as his car halted shortly after the conclusion of the first lap. Najiy Razak pulled into the pits at the same time, bringing his season opener also to a premature end.

On the restart, Scott brilliantly pressured Troitskiy, but ran wide at the first corner.

However, Troitskiy picked up?front wing damage, and this allowed both Scott and Vaidyanathan through.

From then on, the Briton and the Indian pulled away from the rest of the pack, trading fastest laps.

Vaidyanathan set the point-awarding fastest lap, but Scott held on by 1.308 seconds when the chequered flag fell at the conclusion of the 35-minute race, timed due to the long safety car.

There was plenty of action behind, as 2016 Brazilian Formula 3 champion Matheus Iorio charged his way through to a strong third from 10th?on the grid.

Iorio avoided the mess at the start, and moved up to fourth after the restart after a battle with Yan Leon Shlom, which resulted in Shlom puncturing a tyre.

He then inherited third from Troitskiy as his pace dropped off due to his disintegrating front wing. Shlom would recover to finish just outside of the points in 11th.

Troitskiy stayed out for much of the race despite his damaged wing. He was able to resist pressure into the first corner for a few laps due to Simo Laaksonen being beached at that turn, bringing out yellow flags. Laaksonen was taken out by Tarun Reddy, who went three-wide into that corner with Laaksonen and Troitskiy. Troitskiy did pit eventually, and?only finished 13th?after starting on the front row.

Jannes Fittje took the top rookie honours ahead of Eliseo Martinez. Both had largely uneventful races as they took fourth and fifth respectively, but avoided the carnage behind. Petru Florescu rounded off the rookie podium, finishing sixth overall.

Alex Karkosic rounded out the points finishers, despite suffering a puncture after being spun around by Canadian driver Devlin De Francesco.