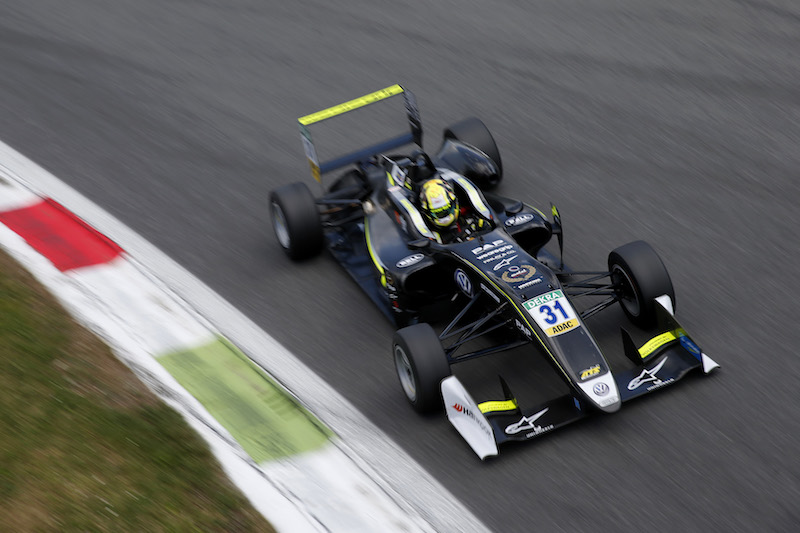 Lando Norris took his second Formula 3 European Championship victory in race one?at Monza despite an opening lap that featured a poor start and running wide at the second chicane.

The Carlin driver started from second place but found himself fourth after the first chicane as he bogged down getting away from the grid. Norris then also ran wide at the second chicane.

Polesitter Jehan Daruvala led until the final six minutes of the race, when Norris overtook his fellow Carlin driver at the first chicane.

Daravula was only challenged once in the opening stages of the race, when on the third lap, Jake Dennis attempted to overtake at the first chicane but ended up cutting it.

He gave the place back to Daravula but also lost out to Norris for second place.

Carlin driver Daravula was then able to build a gap to the chasing pack as Norris, Dennis, Callum Ilott and Joel Eriksson battled for second place.

Ilott had broken an early?Carlin lock-out of the top four by passing?Hasburg into the first chicane. Hasburg fought back but Ilott cut back on the exit of the second chicane and overtook the Carlin driver into the first Lesmo.

A lap later, Dennis got past Norris for second place at the second chicane. Norris then lost out to Illot, moving the Prema driver into third place.

It was all change again another lap on, as Norris regained third place from Illot, and he soon set off after Daruvala.

Ilott then lost out on third place when Eriksson went around the outside of the Ascari chicane. Habsburg would follow him through, and beat Eriksson to the line to make it?a Carlin 1-2-3.

After?locking up at Turn 1, Dennis?managed to get the run on Ilott through Curva Grande to retake fifth place, while?Mick Schumacher was also starting to close in on this battle and duly overtake both Prema teammate Illot and then Dennis for fifth.

At the same point a lap later, Schumacher found himself defending from Dennis. Dennis, however, took a hit from Maximillian Gunther, forcing the Carlin driver on to the run-off area at Turn 1, and he pitted on the same lap to retire the car.

Guan Yu Zhou ended up as the lead Prema driver in fifth ahead of Schumacher and Gunther, while Ilott fell to ninth by the end between Hitech drivers Ralf Aron and Jake Hughes.