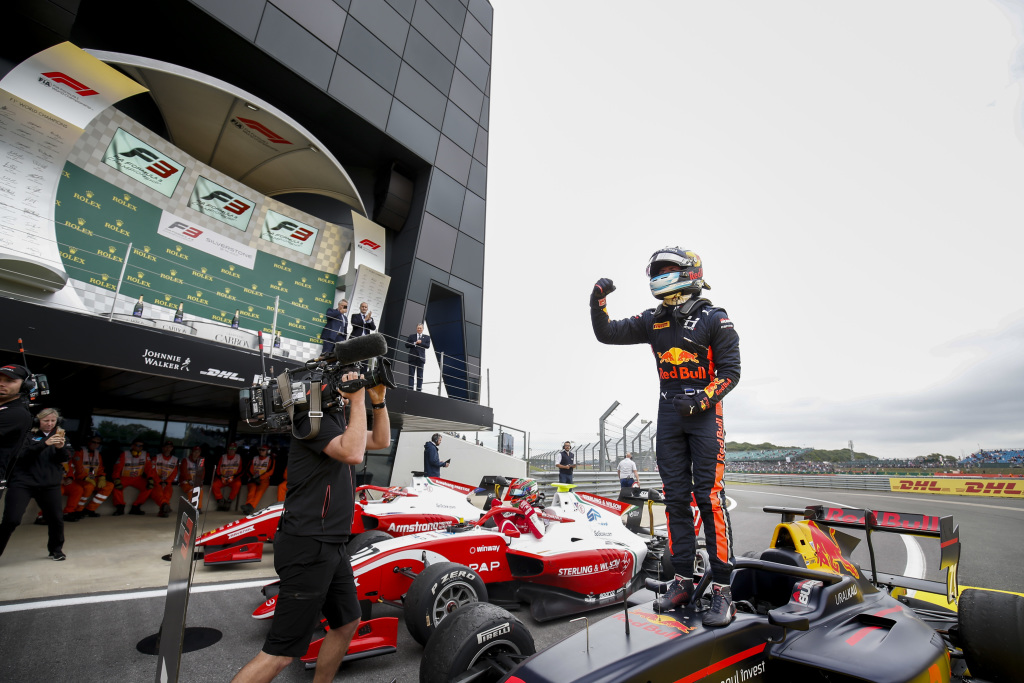 Red Bull junior Vips made a good getaway from pole position to keep the lead as Daruvala immediately got ahead of second-placed starter Marcus Armstrong.

Armstrong was quickly pushed back to fifth, with Christian Lundgaard driving around his outside in the first corner before Leonardo Pulcini also followed past.

A fired-up Lundgaard then tried and failed to pass Daruvala for second on the outside into the right-hander at Maggots, and instead had to rebuff Pulcini, who dropped back behind Armstrong in the process.

All that helped Vips to build a one-second lead over Daruvala on lap one, but the top two were right together by lap four of 20.

Following a virtual safety car to recover debutant Federico Malvestiti?s car from against the pit wall, Daruvala posted the fastest lap on lap nine and forced Vips to defend the inside on the next tour into Brooklands and Stowe.

Daruvala tried again on the outside into Brooklands on the following lap but this time ran wide, allowing Armstrong ? who got back ahead Lundgaard on lap six ? alongside him through Luffield and Woodcote.

A lengthy safety car period following a crash for Raoul Hyman at Copse preceded a five-lap run to the flag, where Vips made a great restart, setting a new fastest lap and moving 1.1 seconds clear. Daruvala moved back within the DRS range before it was re-activated, but Vips was able to keep him out of reach and sealed the win by 0.8 seconds.

Armstrong finished just half a second behind Daruvala, while Pulcini held off Robert Shwartzman for fourth. Fifth for Shwartzman would have been enough for him to jointly keep hold of the championship lead, but Daruvala, in fact, moves ahead by two points by setting the fastest lap of the top 10 finishers.

Lundgaard faltered to seventh late on, passed by Shwartzman and Pedro Piquet down the Hangar Straight on consecutive laps. Liam Lawson just held on to the reverse-grid pole for race two in eighth place, running wide in the very last corner as he stayed ahead of Jake Hughes.

Alex Peroni charged from 21st on the grid to take the final point in 10th, half a second in front of David Beckmann. Logan Sargeant was surging towards the points places in the early laps from 16th on the grid, but came together with Niko Kari over 10th at Brooklands on lap five, forcing both to pit with front wing and tyre damage respectively.