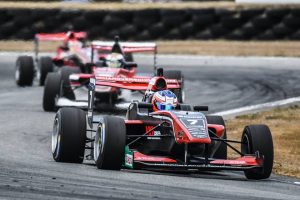 Verschoor kept his pole advantage at the start, as his M2 Competition team-mates Armstrong and Juan Manuel Correa battled over second place.

Armstrong took the position from front row starter Correa, but could not stay on the tail of team-mate Verschoor.

The Ferrari Driver Academy member had a resurgence in the middle of the 20 lap race though, and brought the lead gap down to a tenth at one point after a mistake by Verschoor.

Verschoor placed his car perfectly though, and when Armstrong’s engine started to overheat in the latter part of the race, he romped to an easy 3.983 second victory.

“I didn’t push in the middle part of the race because I knew the surface was quite loose in places,” said the Dutchman after taking victory.

“Then I made a small mistake that let Marcus get close to me. So I had to take back the advantage in the last few laps.”

Verschoor was unaware of the New Zealander’s issues, but with second place the championship leader still extends his points advantage over Shwartzman, the fourth of M2’s five drivers.

Shwartzman qualified fourth, and spent much of the race pressuring Correa for the final podium spot. He fell short in that task, and is now 41 points behind Armstrong.

Giles Motorsport pair Clement Novalak, winner last time out at Teretonga, and Reid Harker finished fifth and sixth, with Harker recording his best ever result in the championship.

The top six on the grid will be reversed for the second race, meaning Toyota 86 championship graduate Harker will start on pole, ahead of team-mate Novalak and the five M2 drivers.