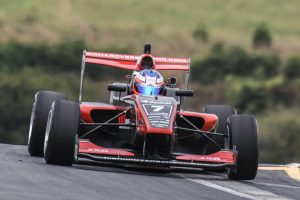 Richard Verschoor took his first two poles of the Toyota Racing Series season at Hampton Downs, with Juan Manuel Correa and championship leader Marcus Armstrong joining him on the front row for the first and third races.

Title rivals and fellow M2 Competition drivers Armstrong and Shwartzman were third and fourth, and both within four tenths of pole-sitter Verschoor.

Clement Novalak, who took his first win in car racing last time out at Teretonga, was fifth fastest, ahead of Giles Motorsport team-mate Reid Harker, Charles Milesi and James Pull.

Verschoor was on top again in the second session, dipping below the one minute barrier, although this time his margin over second place was far smaller.

The Dutchman’s 59.669s lap was only 0.039 seconds faster than Armstrong’s best, and a further thousandth better than Shwartzman’s.

Correa was a quarter of a second back in fifth, ahead of Harker, Milesi, Novalak and Pull.

Armstrong goes into the first race of the weekend with a championship lead of 28 points over Shwartzman, with Verschoor a further 47 points back.