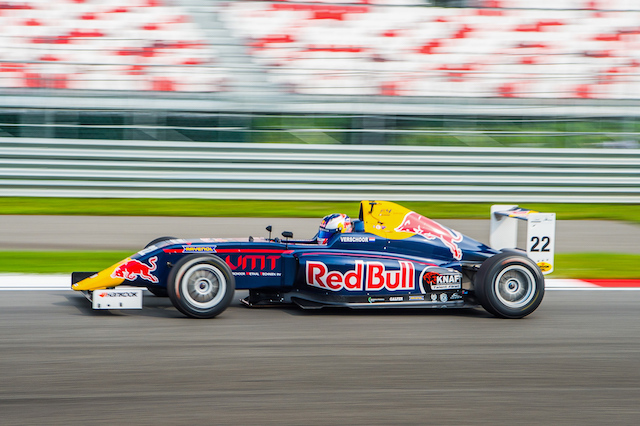 Red Bull Junior?Richard Verschoor has moved into the lead of the SMP Formula 4 Championship after notching up his fourth straight hat-trick across Koiranen-run series.

By dominating the DTM support event at Moscow Raceway, the 15-year-old repeated his feat from the July meeting at the same circuit.?Having swept two Spanish F4 rounds prior to that, he is unbeaten in his last 12 starts across?Koiranen’s two series (he has also taken part in ADAC F4 races in that time and not won).

Having been two thirds of a second clear in qualifying, Verschoor quickly built a lead in race one, and was able to respond to pressure from?Tuomas?Haapalainen to win by 1.557 seconds.

Erstwhile points leader?Jarno Opmeer had to serve a drive-through penalty from third place for a jump start?(along with five others) and was classified in 10th.?Alexey Korneev?beat returnee?Nerses Isaakyan to third on the road, but was one of those given a penalty?and was excluded for not serving his.

In race two, Verschoor gradually pulled away from Isaakyan, finishing up 4.2s clear of the Russian, who was passed on the road by?Rasmus Markkanen, but the Finn was relegated back to third for exceeding track limits in the move.

Opmeer was 16th and last after contact forced him to pit for a front wing, giving Verschoor the points lead.

Verschoor took pole once more for the finale and managed to see off the challenge of Opmeer,?pulling a gap of almost two seconds before backing off on the final lap.?Roope Markkanen held third throughout.