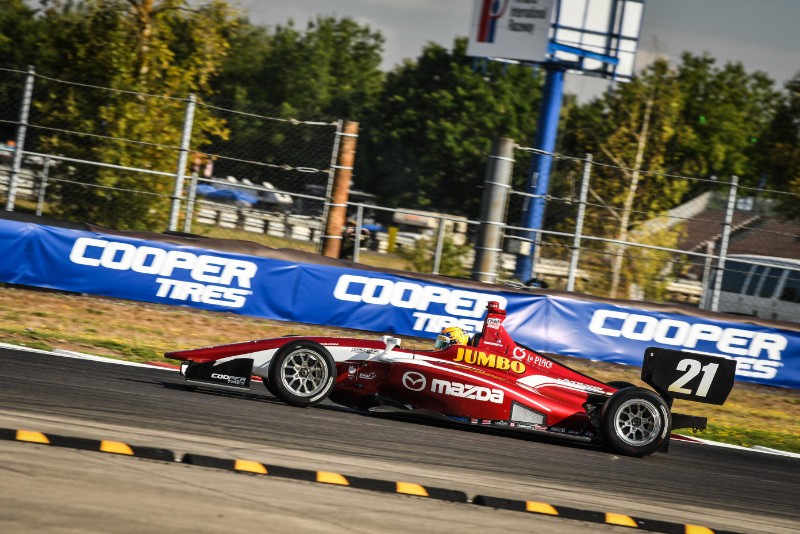 Rinus VeeKay kept his Indy Lights title hopes alive with a victory and a second place at Portland International Raceway.

The Dutchman’s victory came in the opening race,? with HMD Motorsports’ Toby Sowery claiming a maiden triumph in race two.

VeeKay got off to a good start by qualifying on pole for both races. In both sessions, championship leader Oliver Askew looked to have secured the top time before VeeKay put in a late lap, with 0.0001s separating them in race two qualifying.

Askew was held off by VeeKay during the opening laps of race one, who then pulled away thereon.

However, Askew negated the potential of the points gap shrinking too much by finishing second, untroubled by his Andretti Autosport team-mate Robert Megennis and the attacking Sowery behind.

The championship took a twist at the beginning of race two. Askew broke late on the opening lap when trying to pass VeeKay, which after going off track resulted in him being knocked by David Malukas. Askew had to go to the pits for repairs while the full course caution came out for the stricken HMD car of Malukas.

When the race restarted on lap four of 35, Sowery took the opportunity to take the lead from VeeKay. Four laps later, Sowery had a 1.89s gap to VeeKay while Askew had recovered up to fifth.

VeeKay eventually got close enough to Sowery to challenge for the lead, but Sowery had the upper hand around the short lap and took his first single-seater win since BRDC British Formula 3’s visit to Silverstone in 2017.

Passing team-mates Megennis and Ryan Norman, then pulling away from them, meant Askew finished the race a comfortable third and with a 41-point lead over VeeKay. There are 64 points available at the Laguna Seca season finale.