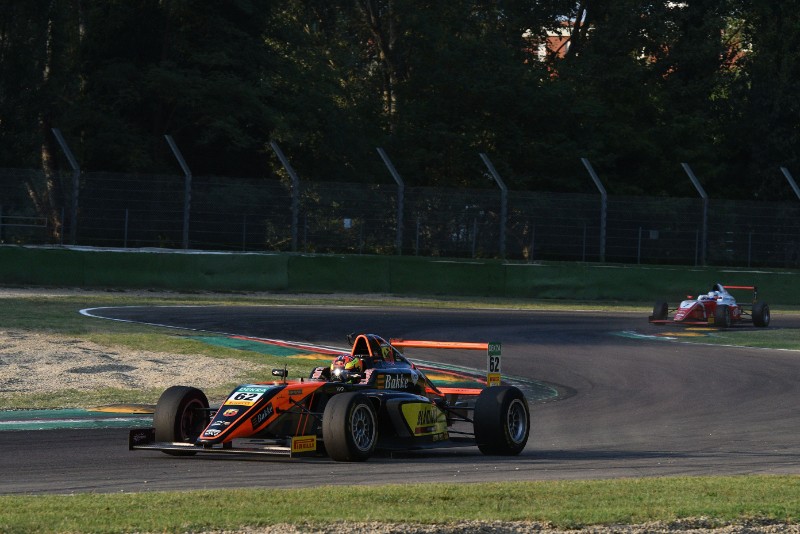 Dennis Hauger claimed victory with a dominant performance in the fourth Italian Formula 4 race at Imola.

The Red Bull junior spent the opening half of the race battling for position with Oliver Rasmussen.

After Hauger snatched the lead off the line, the pair swapped positions multiple times, but Hauger was eventually able to shake the Prema driver and pull away from the rest of the field.

As Rassmussen fought to stay ahead of Paul Aron, Hauger built an advantage of over four seconds on the way to his seventh win.

Guanluca Petecof got a poor start and dropped back to sixth before the safety car was called out at the end of lap one. The title contender passed Lucas Allecco Roy on the restart and closed onto the back of the fast starting Roee Meyuhas.

Meyuhas put up a good defence but Petecof was able to find a way though and rapidly closed the gap to Rasmussen.

The pair ran nose-to-tail in the closing stages of the race, with Petecof finding a way through on the final lap, denying his team-mate his first podium of the season.

Roy had been running inside the top 10 in the early stages of the race, but was forced to retire after colliding with Joshua Durksen.

Durksen was able to continue, though dropped down the order and was later handed a 25-second penalty.

Meyuhas spent the closing stages of the race leading a train of cars in sixth. Ivan Berets kept the pressure on the Cram Motorsport driver, but struggled to find a way through.

Berets was eventually able to make a move stick, but Meyuhas closed the door before Alessandro Famularo could follow the DRZ Motorsport driver through.

Jonny Edgar endured a difficult race after qualifying outside the top 10. The Red Bull junior slowly picked his way up through the order, joining the back of the train of cars battling for sixth.