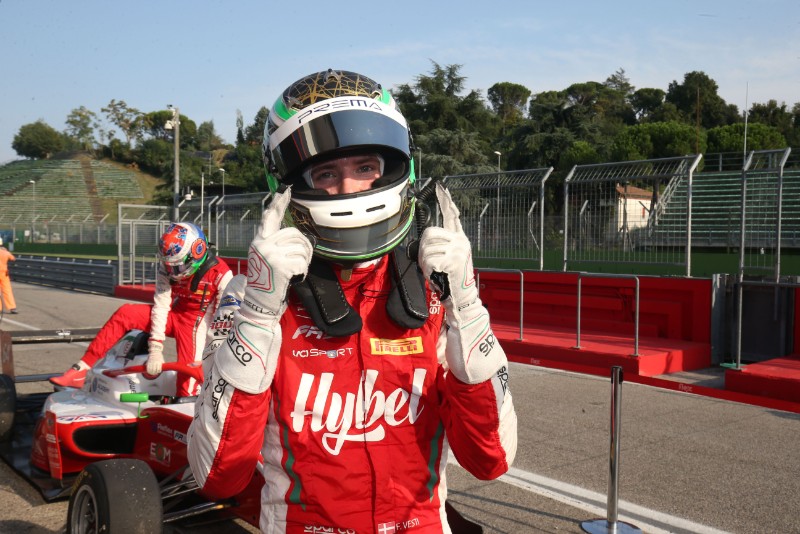 Frederik Vesti claimed victory in the final Formula Regional European Championship race of the weekend at Imola despite a 10-second penalty.

Vesti was handed the penalty in the closing stages of the race after making contact with Sophia Floersch behind the safety car. The Prema driver was leading by over five seconds, having passed team-mate Olli Caldwell a few laps previous.

He spent the remaining laps putting in fast laps in an effort to improve his lead, and had managed to pull more than nine seconds ahead of Caldwell at the start of the final lap.

Vesti managed another flying lap to take the chequered flag 10.015s ahead of his team-mate, retaining the victory by just 0.015s.

Victory meant Vesti extended his championship lead by a further 25 points, as race three winner Enzo Fittipaldi ended his race in the gravel after contact with David Schumacher on the opening lap.

Tom Blomqvist started from pole, as a result of the race being carried over from the rained off Vallelunga round, and managed a strong opening lap to retain the lead ahead of Floersch and Caldwell, with Vesti slotting into fourth before Fittipaldi brought out the safety car.

Contact with Vesti sent Floersch into a spin and dropped her down the order, putting the Prema duo in prime position to attack Blomqvist at the restart.

Blomqvist put up a good defence when the race restarted, but could not hold either driver off and dropped back to third.

In third, Blomqvist led a five-car train, with Raul Guzman, Igor Fraga, Schumacher and Marcos Siebert all looking for a way past.

Schumacher and Siebert fell back in the second half of the race, before a spin for Guzman left only Fraga battling Blomqvist for the final podium position.

The pair ran side-by-side on the final lap, holding one another up and falling further back from the two Prema drivers. Blomqvist managed to hold onto the position to take his first podium of the season.

Schumacher took fifth, ahead of Siebert and Matteo Nannini. Floersch recovered to finish eighth, with Konsta Lappalainen and Alexandre Bardinon completing the top 10.