Vaxiviere to drive for new Spirit of Race F3.5V8 team alongside Atoev 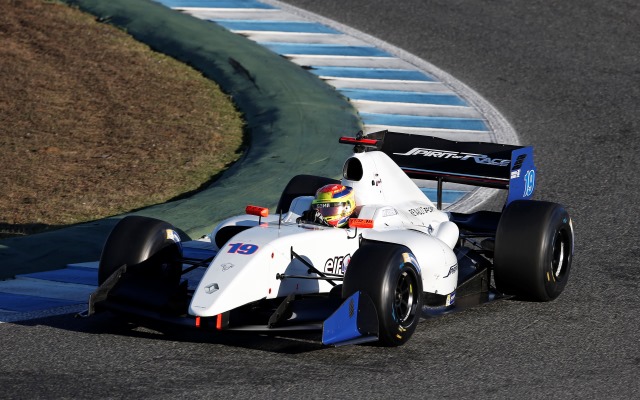 Series runner-up Matthieu Vaxiviere will continue in Formula 3.5 V8 in 2016 for the new Spirit of Race team alongside Vladimir Atoev, who will make the leap from Formula 4.

The driver pairing was revealed at a press conference by Atoev’s backer SMP Racing, which will support founder Amato Ferrari in managing the team that has taken over the entry and equipment of the former Draco operation.

Vaxiviere,?finished second to champion Oliver Rowland in 2015 after winning three races in his second season with the Charouz-run Lotus squad, conducted Spirit of Race’s maiden running at the test that followed the Jerez season finale in October (pictured) and set the quickest time.

Thereafter the team concentrated on drivers from the SMP Racing programme, including Atoev.

The tall Russian, who will only turn 17 in January, finished second in SMP F4 in 2015 after debuting in single-seaters in the French series (incidentally won by Vaxiviere in 2011) the previous year.

He first sampled the 3.5-litre car with Carlin at the Jerez test before joining up with Spirit of Race for the Aragon and Barcelona sessions.

SMP already has strong ties to Amato Ferrari’s AF Corse organisation in sportscars, while Vaxiviere has links to the outfit through gentleman driver Francois Perrodo, who shared a Porsche with his fellow Frenchman in the World Endurance Championship in 2014 prior to joining the Ferrari squad.

Atoev’s fellow SMP-backed drivers Matevos Isaakyan and Nikita Zlobin also tested for Spirit of Race, but the former is already signed up for GP3 next year and the latter looks set to step down to Euroformula Open after contesting two 3.5 rounds at the end of 2015 for Pons Racing.