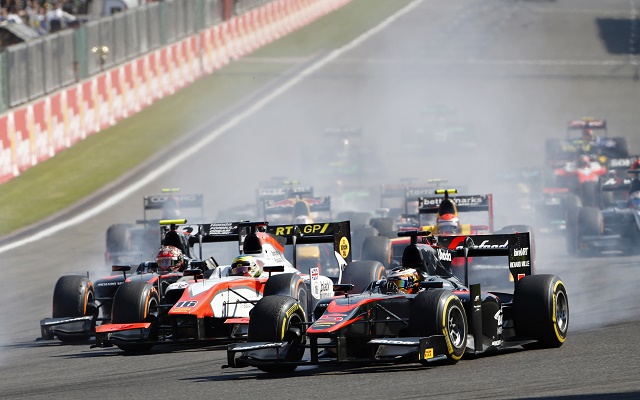 McLaren protege Stoffel Vandoorne continued to march towards the GP2 title as he returned to winning ways in the first race at Spa-Francorchamps.

The Belgian, starting on softs, managed to get his stop out of the way during a safety car for a massive Daniel de Jong crash and then cruised to the chequered after the race resumed.

Vandoorne was off to a largely uninspiring start and was passed by third-placed Sergey Sirotkin on the inside, albeit the Russian then missed the braking point into turn one and rejoined in third.

However, he got off easy compared to his former FR3.5 teammate Oliver Rowland, whose front row start was followed by a La Source crash with Nobuharu Matsushita.

The incident briefly bottled up the field and led to widespread shuffling for position, which continued all the way through Eau Rouge.

But the lap was completed without further incident, Vandoorne leading a fast-starting Alexander Rossi and Sirotkin.

The Russian soon slipped down to fourth, overtaken by Mitch Evans with the help of DRS, but the action was then suspended for a horrid-looking crash involving de Jong.

De Jong was scrapping with Pierre Gasly, who found himself losing places after early contact with compatriot Norman Nato.

As de Jong attempted to pass the Frenchman round the outside of Blanchimont, Gasly moved over and hit de Jong’s MP car off the track, causing a high-speed trip to the barriers.

An inevitable safety car followed, with Vandoorne and other soft-tyre runners pitting in, shortly before the race was suspended. The rest of the top five were on the harder compound and had stayed out.

After de Jong was removed from the car, reportedly unhurt, and the badly damaged barriers were repaired, the race restarted almost half an hour later.

Rossi held the lead and soon pulled out a couple of seconds on Evans, while Vandoorne began to charge from ninth place.

The Belgian was up to sixth by the time Rossi came in for his mandatory stop, rejoining in 14th place, while Vandoorne soon cycled through into the lead.

He would be untroubled from that point on, taking an easy win after the 25-lap distance concluded.

Arthur Pic and Artem Markelov were on a similar strategy and managed to complete the podium – Pic’s first in 2015 and Markelov’s first in his GP2 career.

Julian Leal was fourth, while a late dive from Evans on Rossi saw the Kiwi cut the Bus Stop chicane and cross the line in fifth place.

Nathanael Berthon and Jordan King were ninth and eighth, the latter salvaging a reverse-grid pole.

Sirotkin had to do with ninth, ahead of first-time points scorer Marlon Stockinger and Gustav Malja, taking 11th on his GP2 debut.

Rio Haryanto, another driver to run on the softs in the first stint, was in podium contention before receiving a stop-and-go penalty, having stalled in the pitlane during the restart and receiving assistance against the rules.