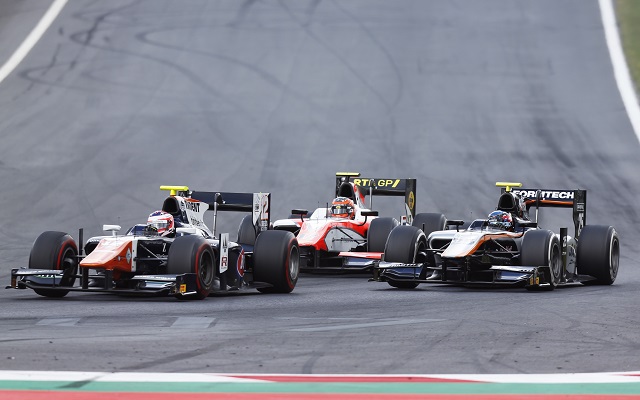 The GP2 grid for the Monza round this weekend has been finalised, with Meindert van Buuren making his debut and joining category veterans Johnny Cecotto, Rene Binder and Simon Trummer?in filling vacant seats.

Van Buuren will line up with MP Motorsport, a team he has previously raced for in Auto GP and Formula Renault 2.0.

He began this year in FR3.5 but left the Lotus squad over sponsorship issues, before a one-off return to Pons for the last round at Spielberg.

The Dutchman is joined by Binder, who raced for Trident up until Spa when he was ruled out by a reported infection.

Having not scored a point with Trident, he’s now moved over to the MP team, which needed two new drivers?after its regular Daniel De Jong?required back surgery following his heavy crash in the Spa-Francorchamps feature race.

Oliver Rowland and Nicholas Latifi – who had shared the second MP car over the previous three events – are both in FR3.5 action at Silverstone.

Binder had been replaced at Trident at Spa by Gustav Malja, who scored a point on his debut but is another to be concentrating on FR3.5 this weekend.

The second Trident seat?alongside Ferrari protege Raffaele Marciello is therefore taken by Cecotto, returning to the team with which he finished fifth in last year’s standings and won two races.

Cecotto will be making his fourth GP2 appearance of the season, having driven for Hilmer at Barcelona and in Monaco and for Carlin at Silverstone.

Hilmer Motorsport will be fielding just one car, as it did at Spa. Nick Yelloly, who had driven for the team since its delayed 2015 debut at Barcelona, is yet another to focus on FR3.5 this weekend.

He is replaced by Trummer, who previously appeared for Hilmer alongside Yelloly at Spielberg. The Swiss driver has focussed on a World Endurance Championship with the LMP1 team of Colin Kolles this season.

In total there are six changes to the GP2 grid for Monza, on a busy weekend of motorsport.

In moves announced earlier this week, Jann Mardenborough will step up from GP3 to fill in for another FR3.5 regular Sean Gelael at Carlin, while ex-GP3 driver Patric Niederhauser will drive for Lazarus in place of Nathanael Berthon, who is busy in the European Le Mans Series.