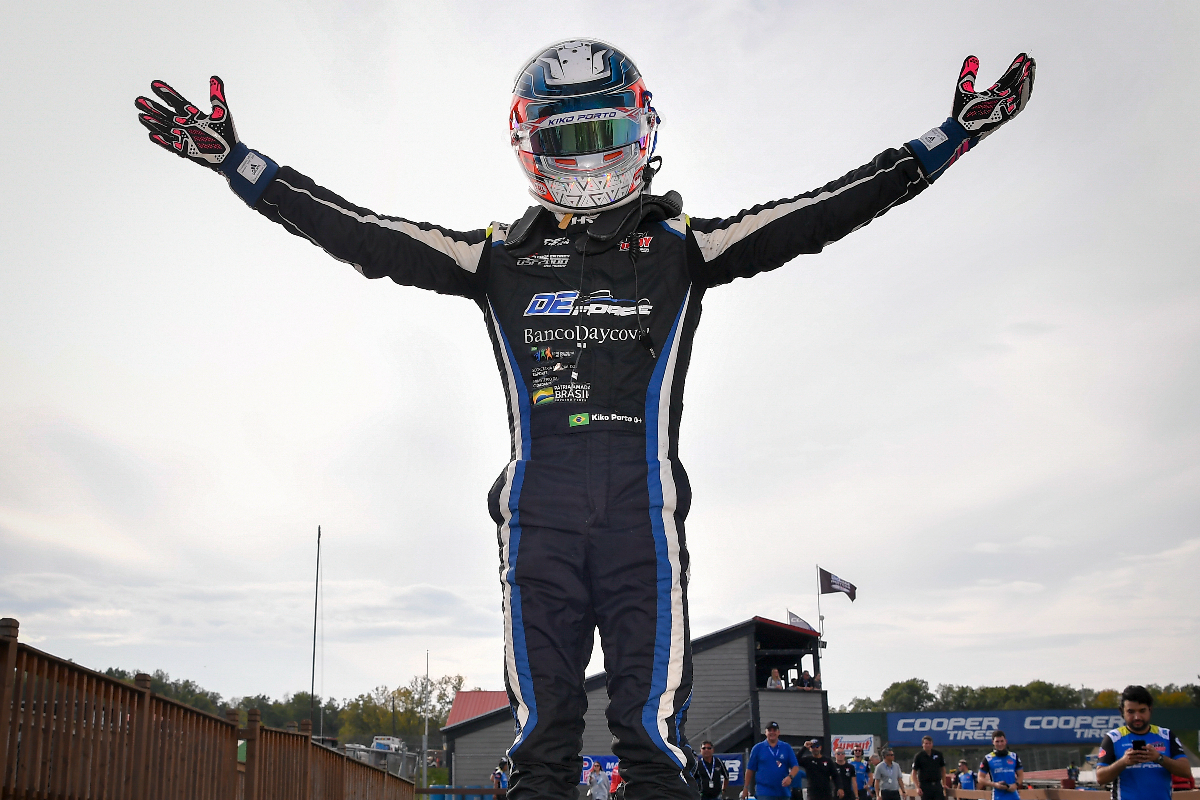 Reigning USF2000 champion Kiko Porto will stay with DEForce Racing as he moves up to Indy Pro 2000 in 2022.

The Brazilian recieves a scholarship to progress to the next stage of the Road to Indy as a result of winning the USF2000 title with DEForce, a team he has been with since 2019 when he was United States Formula 4 title runner-up.

He then moved into USF2000 for 2020, and came 10th in his rookie season with one win. This year he claimed four victories en route to title success.

“We have achieved a great achievement this year, being USF2000 champions and, with the same energy and competence, we are ready for another challenge that awaits us.

“Thank you Ernesto and Davi [Martinez, the team co-founders] for their trust, and everyone who is part of the team. Let’s go together!”

Porto is the third announced driver on the 2022 grid, after Josh Green at Turn 3 Motorsport and automotive YouTuber-turned-racing driver Casey Putsch at Legacy Autosport.

Further up the Road to Indy, Benjamin Pedersen is already starting preparations for his second season in Indy Lights driving for Global Racing Group with HMD Motorsports, while in USF2000 it’s been confirmed that Christian Weir will be contesting his second USF2000 season with Turn 3.

Weir came seventh in the F4-based YACademy Winter Series at the start of 2021, with a best result of fourth, then joined Turn 3 in Formula Race Promotion’s new Eastern F4 series.

He took a win at each of the first two rounds, missed a round but won the final four races to claim the title. Alongside that programme he tested and then raced in USF2000 with the team, debuting underage at 14 with the discretion of IndyCar.

There was a best finish of sixth from eight races, and he also claimed two podiums from two rounds in United States F4 with Gonella Racing once he had turned 15. However that ended painfully as he broke his back in the Circuit of the Americas season finale and he is still set to be in a back brace until the second half of December.

“Last year, Turn 3 gave me my first taste of car racing in the FRP Eastern Pro 4 Challenge, and together we were able to win the championship. I also had strong results in the US F4 championship which gave me the confidence to go after USF2000 at the end of this year.

“The USF2000 field was so strong, but we were able to score a fastest lap and a string of top-10 finishes even without having the level of experience as the seasoned drivers.”