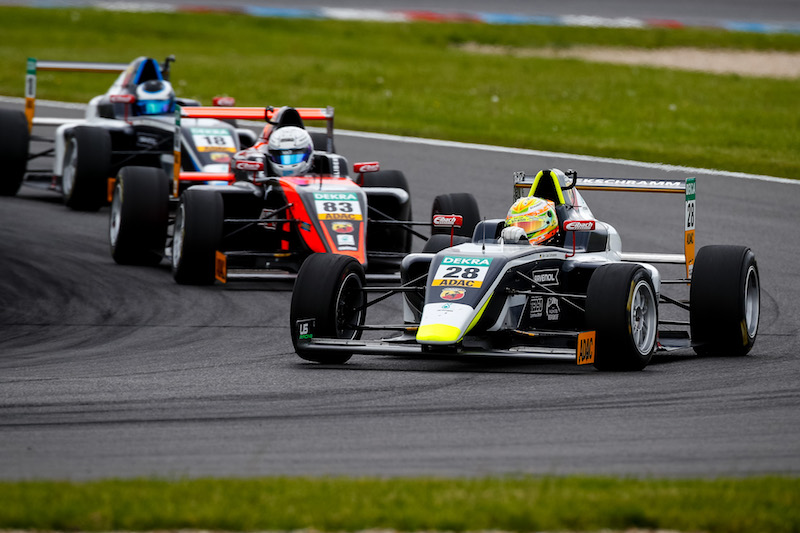 Kim-Luis Schramm and Julian Hanses won the two?ADAC Formula 4 feature races at round two at the Lausitzring, but only on a provisional basis after their US Racing team appealed their exclusion from a qualifying lock-out.

The team of Gerhard Ungar and Ralf Schumacher swept the top four positions in qualifying, with its driver quartet covered by only 0.067 seconds.

A technical irregularity was then found on all four cars in that “a?camber shim had not been fitted to the front right wheel suspension”.

All four entries were excluded from the results of qualifying, but US Racing appealed this, allowing them to take up their original grid positions for races one and two with the race results from all three races to remain provisional until the German federation DMSB rules on the appeal.

It was Schramm that was quickest in qualifying and he converted pole into victory in race one ahead of Kami Laliberte, the fastest non-US qualifier who surged from fifth to second with a well-judged dive down the inside of both Nicklas Nielsen and Fabio Scherer at the first corner of the race.

Forced out wide, Scherer fell to sixth before being hit by Jonathan Aberdein at the same point on lap two, with the safety car needed to retrieve the South African’s Motopark car.

Juri Vips moved past Hanses soon after the restart for third, with Marcus Armstrong taking fifth in front of?Felipe Drugovich, as front-row starter Nielsen tagged Juan Correa while battling over?sixth and finished a lap down after pitting for a front-wing change.

Hanses went from fourth to first on the grid for race two, set by second-fastest qualifying times, and he too turned that into a win – his first.

After an early safety car, he was able to pull away from Armstrong, who was then passed by Drugovich in a good switch-back move through the opening corners.

Drugovich won the reversed-grid race three, in which Van Amersfoort Racing ran 1-2-3 for much of the race.

Louis Gachot led from pole early on ahead?Frederik Vesti and Drugovich, who then quickly worked his way to the front after a safety car period following a torrid first lap for rival squad Prema – in which Vips was sent spinning by contact from Armstrong after a hit from the other VAR car of Laliberte, with Armstrong running off track in avoidance, before Correa tangled with Richard Wagner a couple of corners later.

While Vesti took second, Schramm came from 10th on the grid to deny Gachot third.