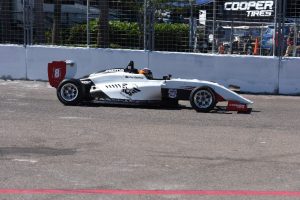 Kirkwood, who started second alongside pole-sitter Jose Sierra on the front row of the grid, made what was the decisive move at the first corner on the opening lap, passing Sierra before a yellow flag was brought out due to an incident involving Manuel Cabrera, Igor Fraga, Oscar DeLuzuriaga and Zach Holden.

Cape Motorsports driver Kirkwood aced the restart and went on to build a gap over Sierra, pulling out a margin to win the 20-lap race by 5.4945 seconds.

Sierra was troubled for second in the race by US debutant and British F4 champion Jamie Caroline.

Caroline made his way past for second on lap eight of 20, before retiring from the race with a broken suspension following suspected contact at turn 10. His BN Racing team-mate Russell McDonough also retired from the race with the same issue.

Darren Keane rounded out the podium, despite starting in eighth, as drivers in front of him hit trouble. He finished ahead of Calvin Ming but was 10 seconds behind the race winner.

Alex Baron, Lucas Kohl and Kory Enders all served drive-through penalties due to jumping the sole restart. Baron, the race two pole-sitter, worked his way from the back to the top 10 before retiring from the race himself. He did, however, set fastest lap.

Julian van der Watt completed the top five, after starting from outside of the top 10, beating Colin Kaminsky and Bruna Tomaselli, who won the National Class at this event last year.

Kaylen Frederick, one of the title favourites and third fastest in qualifying, was in the pits by the third lap following contact, but worked his way up to 11th?at the finish.