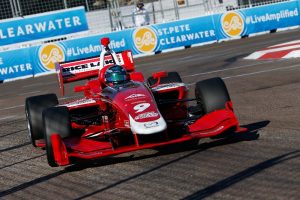 Telitz only had to beat eight others to take the top starting slot, after Juncos only brought one car despite having signed three drivers over the winter.

A 1m05.128s late in the session gave the 26-year-old pole, with Andretti Autosport’s Patricio O’Ward, who was set to start second at this same event last year before being sent to the back, joining him on the front row.

The top five were covered by less than half a second, with the remaining four separated by almost a second.

Andretti pair Ryan Norman and Dalton Kellett were sixth and ninth, with Team Pelfrey duo Shelby Blackstock and Neil Alberico sandwiched in between.

Two-time Mazda scholarship winner Oliver Askew set himself up for a third by taking pole for his first race in Pro Mazda.

The American wasn’t the pace-setter for most of the session, with European converts Harrison Scott and RP Motorsport initially setting the benchmark time.

Scott couldn’t remain there though, and he slipped behind Cape Motorsports driver Askew and Exclusive Autosport’s Parker Thompson by the end of qualifying.

Joining him on the second row was Juncos’s Carlos Cunha, with team-mate Robert Megennis just behind.

British Formula 4 champion Jamie Caroline, who secured a late deal to drive for BN Racing in the USF2000 season opener, looked set to take pole on his debut before crashing, handing top spot to Jose Sierra.

The 19-year-old was instantly on the pace, and held top spot before he crashed halfway through the session, dislodging the left-rear wheel of his car and damaging the rear suspension.

Assistance briefly came when team-mate Russell McDonough got stuck at the end of the lap and caused a red flag, but the damage proved too great and the red flag period proved too short for Caroline to get out in time to set a lap. He eventually dropped to seventh on the grid.

US F4 champion and Cape Motorsport driver Kyle Kirkwood was the man who set the pace after that, until a late lap by NACAM F4 race-winner Sierra put the Mexican on pole by just 0.0638 seconds.