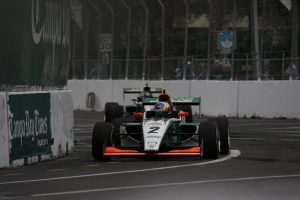 Rinus VeeKay took his and the new Tatuus PM-18 Pro Mazda car’s first win at St. Petersburg as both made their race debuts in the championship.

Front row starter Parker Thompson took the lead as a result, with Juncos pair Robert Megennis and VeeKay moving into second and third. Askew and Cunha dropped to the bottom half of the top 10, with RP Motorsport driver Scott faring worst and sinking to the back.

Thompson pulled out a lead at the front of the field after an early safety car, caused by a clash between Cunha and Rafael Martins, while VeeKay moved past team-mate Megennis to take second.

While Thompson extended his lead and set fastest lap multiple times, VeeKay preoccupied himself with keeping Megennis, Sting Ray Robb and Askew behind him.

A crash by James Raven on lap 14 led to another safety car though, and VeeKay wasted little time before snatching the lead.

The Dutch driver, who will test Euroformula Open machinery later this month, quickly established a 1.5 second lead, but that was reduced to just over three tenths by the chequered flag.

Megennis finished third to make it a Juncos one-three, while Thompson’s second place was a good return for both his and Exclusive Autosport’s first race in Pro Mazda.

Cunha recovered to fourth, ahead of Askew, with Robb dropping to sixth but gaining an extra point after beating Thompson’s fastest lap.