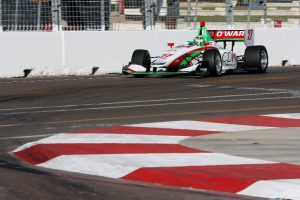 Patricio O?Ward marked his return to Indy Lights with a dominant first win at St. Petersburg, after poleman Aaron Telitz failed to start.

O?Ward, the de-facto pole-sitter after Telitz destroyed his car in second qualifying earlier today, dominated the 35-lap race, finishing ahead of Santiago Urrutia by 6.6014 seconds.

“It’s my first win in Indy Lights. [I’ll] hopefully get some more of these.”

Urrutia, returning for a third crack at the title with Belardi Auto Racing, had a relatively quiet race other than jumping Andretti Steinbrenner Racing’s Colton Herta at the start.

Herta, who started third, had an awful getaway and dropped down to fifth by the first corner after tapping reigning Pro Mazda champion Victor Franzoni.

The second-generation driver recovered back to third, by displacing Team Pelfrey’s Shelby Blackstock on lap four for fourth place, and then Juncos Racing driver Franzoni on lap 19.

Herta had frontrunning pace, as he set the fastest lap late in the race, but by the time he had made his way past Franzoni, he was 18 seconds behind O?Ward.

The battle of the race was over fifth place, which was taken by Blackstock.

He shared the same piece of track for much of the race with Andretti Autosport pair Dalton Kellett and Ryan Norman, and Pelfrey team-mate Neil Alberico. Alberico hit Kellett on lap 23, destroying the latter?s race completely.

Alberico would tap the wall late in the race after locking a wheel on lap 31, but only lost a single position. Norman capitalised on this by taking sixth having spent much of the race in eighth. Alberico finished seventh, ahead of the lapped Kellett.

Telitz hopes to contest the second race on Sunday, and still has a singular point earned from topping the first qualifying session.