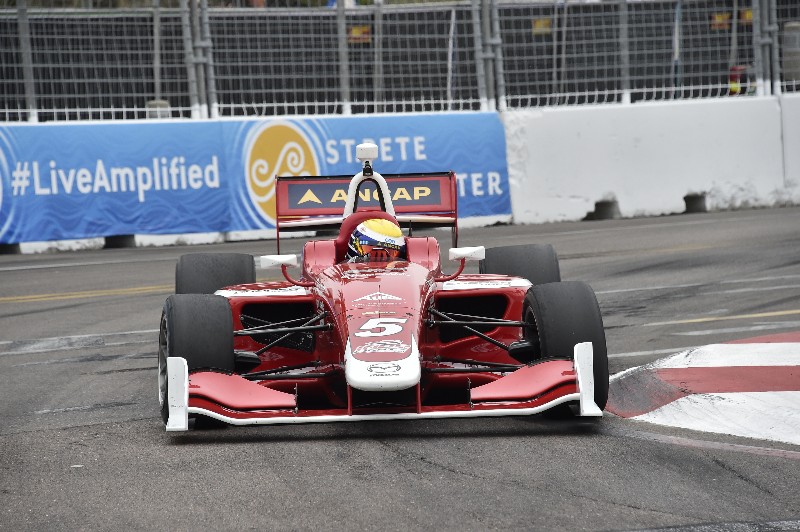 Santiago Urrutia capitalised on a mistake by race one winner Patricio O?Ward to take victory and the Indy Lights championship lead in the second race at St. Petersburg.

Urrutia, who had been anonymous for much of the weekend, looked set to finish in second place until O’Ward missed his braking point at Turn 4 in the closing stages of the race.

The mistake dropped the Mexican to the back of the field, leaving Urrutia, who started from sixth on the grid, to beat Team Pelfrey?s Shelby Blackstock by 11.7406 seconds.

Urrutia had worked his way up to third by the end of the first lap, after getting a good start and gaining from a collision between his team-mate Aaron Telitz, who was forced to miss the first race due to damage from a qualifying crash, and Juncos Racing?s Victor Franzoni at Turn 3.

Polesitter O?Ward lost the lead at the start to Andretti stable-mate Colton Herta, before claiming it back on lap 5 at a restart with a magnificent pass into Turn 4.

However, immediately after setting the fastest lap of the race ? the only lap below 1m06s ? with 10 minutes to go, O?Ward ran down the escape road at Turn 4, and took a long time to get going again.

Telitz, who was only able to race thanks to former Lights team Carlin providing a car and team member to help the Belardi team out, ruined his new car on the first lap after squeezing Franzoni, who in turn lost control of his car on the kerbs.

Franzoni was able to rejoin the race at the back of the pack after pitting for a new nose, and eventually recovered to finish in fourth after a frantic final lap.

Andretti?s Ryan Norman was fighting Pelfrey?s Neil Aberico for much of the race, and Norman tagged Alberico on the final lap into the first corner. Norman escaped with minor front wing damage and rounded out the podium, while Alberico suffered a flat tyre, and had to limp home in fifth.

Dalton Kellett, also driving for Andretti, rounded out the top six after an anonymous run at the back, some 20s ahead of O?Ward at the finish. Herta and Telitz were classified in eighth and ninth.

Urrutia now leads the championship by eight points over O’Ward, with Blackstock a further five back in third. Herta is sixth, 20 points off the lead, while Telitz languishes in ninth and last with a singular point from his race one pole position.