Home News Alex Baron gets career back on track with USF2000 victory in St. Petersburg
NewsUSF2000 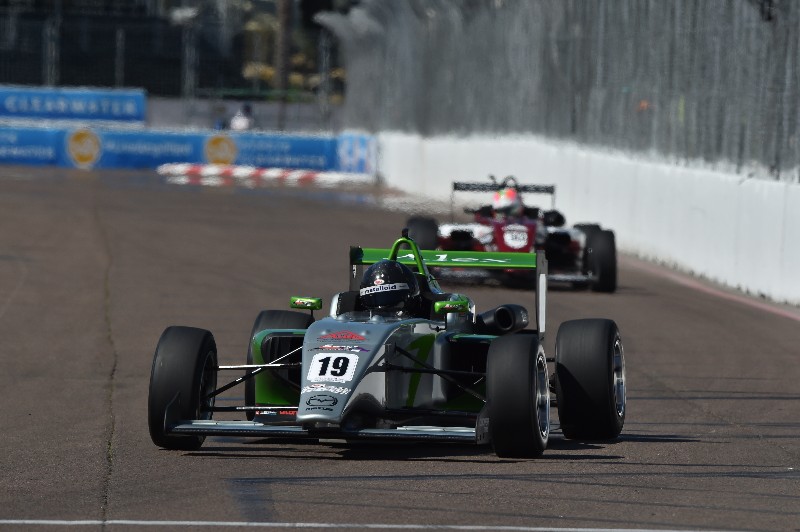 Indy Lights race-winner Alex Baron added a third USF2000 victory to his CV at St. Petersburg by dominating the second race of the weekend.

Baron was the 2012 French Formula 4 champion, was a USF2000 winner in 2013 and won at Toronto in Indy Lights in 2014. His racing career in America has in recent times been held back by visa issues.

The Frenchman failed to finish the first USF2000 race, but made up for it by taking pole, win and fastest lap in the second.

He was at the head of the field for the duration of the race, which ended under yellow flag conditions due to multiple incidents on the last lap.

Caroline sprent most of the race in third, including challenging Fraga, but outbraked himself going into the first corner late in the race and dropped to fifth, although still with enough time to reclaim fourth from Kirkwood.

Jose Sierra finished sixth, having briefly had a shot at getting past Caroline, with Zach Holden, Calvin Ming, Kaylen Frederick and Kory Enders rounding out the top 10.

Rasmus Lindh spent most of the race ahead of that group, despite starting down in 14th, before a high speed crash at the last corner while chasing Kirkwood put him out of the race.

The crash led to a caution period, the restart of which Caroline made his mistake at.

Julian van der Watt was another who should have had a top 10 result, having raced furiously with Lindh, Sierra and Frederick, but a late error led to him dropping to 11th.