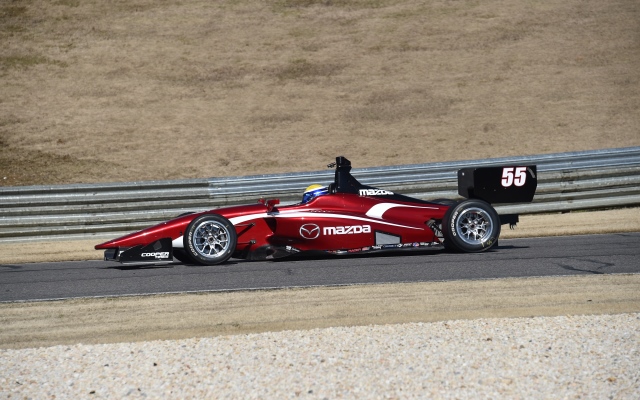 Schmidt Peterson Racing driver Santiago Urrutia made?a strong?statement in the final pre-season test for the Indy Lights series at Barber Motorsports Park by setting the outright fastest time of the day, while Carlin’s Ed Jones continued his excellent pre-season form as the fastest man in the morning session.

Jones led the three-hour morning test session with a best time of 1m13.029s, but was only one-hundredth of a second faster than Team Pelfrey rookie?Scott Hargrove‘s best time in the morning session.

Andre Negrao was sixth, ahead of SPM teammate Urrutia, with Jones’ teammate?Felix Serralles?eighth,?Andretti Autosport driver?Shelby Blackstock ninth, and?Zach Veach in tenth in the other Belardi entry.

In the three and a half-hour afternoon session, the defending Pro Mazda champion Urrutia set a blistering fastest time of 1m12.448s around the 3.8 kilometer road course near Birmingham, Alabama,?less than one-tenth of a second away from the official lap record set by?Spencer Pigot?during qualifying for last year’s Indy Lights race at Barber.

Reigning European Formula 3 champion Rosenqvist was second-fastest, and completed 108 laps on the day, more than any other driver. Hargrove continued his good form by finishing third, ahead of Enerson in fourth, who all set times under the 1 minute, 13 second threshhold. Serralles,?Kaiser, Veach, Negrao, and Blackstock followed in positions fifth?through ninth, with?Dean Stoneman finishing the afternoon session tenth-fastest.

Scott Anderson completed 90 laps in his first test session of the 2016 pre-season in a fourth Schmidt Peterson car, but was only 13th and 15th fastest in the two test sessions respectively.

The other two series of the Mazda Road to Indy, the Pro Mazda Championship and USF2000 National Championship, will test at Barber Motorsports Park over the next two days. Their seasons will begin next weekend on the street circuit at St. Petersburg, Florida.