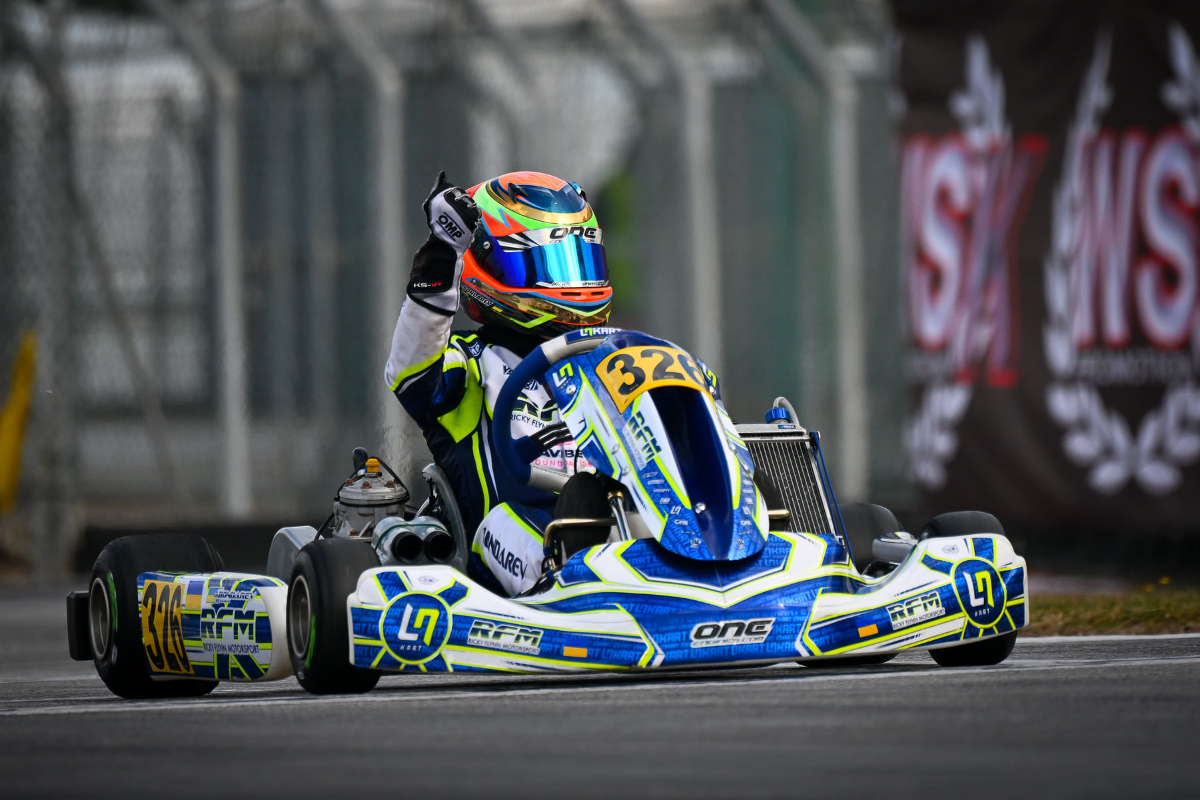 Ukraine is currently fighting a brutal and horrific war, and its plight has captured the world’s attention. One junior karter is showing the country’s “winning spirit” on the international stage. Meet Oleksandr Bondarev

Oleksandr ‘Sasha’ Bondarev was crowned WSK Super Master Series champion in the OK-Junior class last weekend. That’s a title previously won by the likes of Callum Ilott, Clement Novalak and Enaam Ahmed, and not only was it Bondarev’s first major karting title but it was also the first for OTK’s Lando Norris-branded kart chassis.

Ukraine’s last karting star to get the big results abroad was Andriy Pits, who won the Spanish and Portuguese titles in 2015, and Bondarev’s purple patch has arrived at a moment in time where national pride is keeping a population’s morale up.

The four-round SMS season took place over the past three months in Italy, and started strongly for Bondarev at the South Garda circuit. He took one win and three second places in his heats, came second in his pre-final and then took the win in the final with an in-the-dirt move at the last corner of the last lap on Rene Lammers, son of ex-Formula 1 racer Jan Lammers.

However his pass, which after going off track to get side-by-side with Lammers and then making contact with him as he rejoined for the final hairpin dislodged his front fairing, earned him a five-second bumper penalty and dropped him to fourth.

Round two was also at South Garda, and despite a slightly disappointing qualifying Bondarev was able to take a win and two second places in the heats. He led most of his pre-final but finished second, and it was the same in the final as from pole he led the first half but got beaten by Lucas Fluxa. On the plus side he was now points leader headed to La Conca.

He was able to pick up a heat win and a second place again, and 14th place in the wettest heat didn’t actually have too much impact on the rest of his weekend. From the front row he dominated his pre-final, then repeated that feat in the final by moving from fourth to first on the opening lap and crushing the opposition by nine seconds in 16 laps. 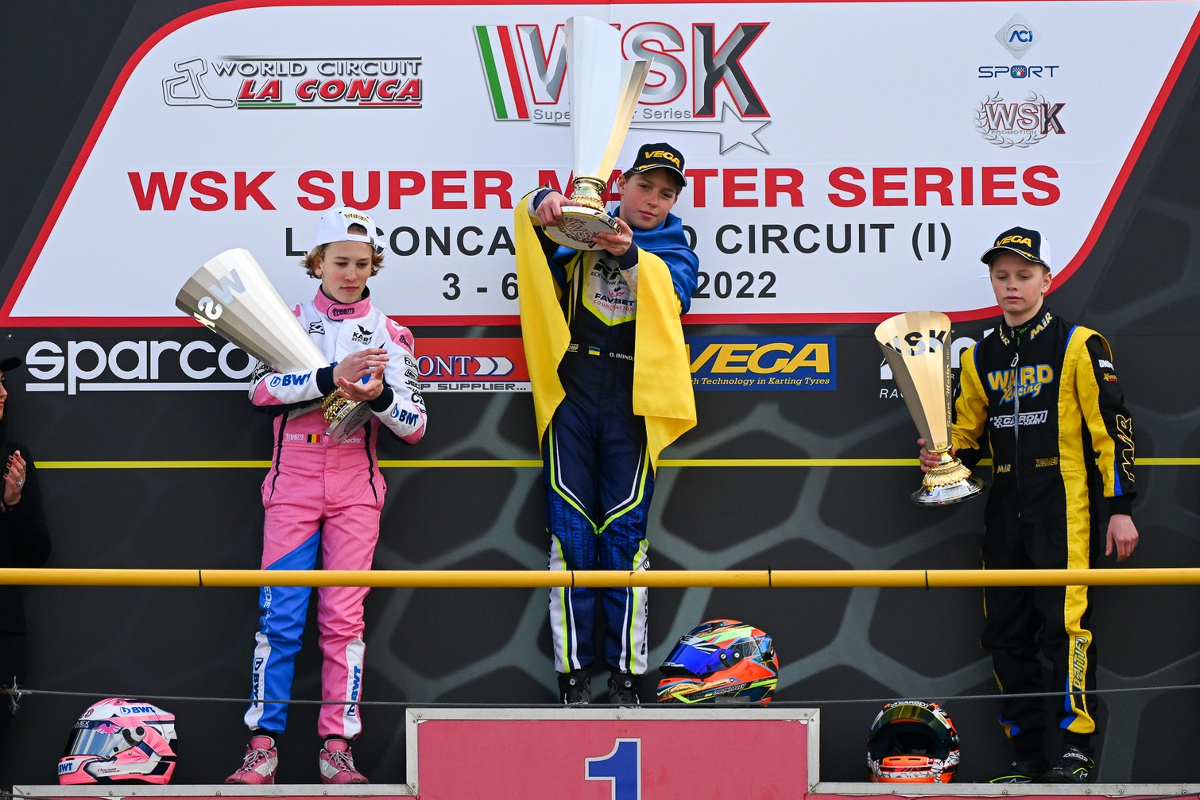 That put him in a comfortable position to wrap up the title at Sarno, and after topping his qualifying group and finishing no lower than second in the heats the job was almost done. Bondarev came out fourth in a super-close pre-final fight, and was up to second in the final before being spun to the back and finishing 33rd. But that result was still more than enough.

“It was a nice season. We had the pace the whole time, so it worked out well,” Bondarev tells Formula Scout.

“After the first round when I got the bumper penalty because of that last-lap move, I knew that even with that P4 in the final, I would still be able to fight for the SMS title because the other rounds I would have the same pace. In round two I just didn’t have enough pace in the final, and round three it was my type of conditions so we won, and round four we were just unlucky in the final.

“It wasn’t the wet conditions [where I thrived],” Bondarev says of his La Conca domination. “It was the wet on Saturday, and the rain washed away all the rubber that was driven up in the first two days of practice and on Friday. Then on Sunday in the no-grip conditions I had done testing on before, I was really comfortable with them so it just worked out really well.”

Bondarev came 28th in the series last year as a OK-J rookie and as a total privateer. He explains how impressing against the odds then enabled him to move to the crack Ricky Flynn Motorsport team for 2022 and be even more competitive.

“Last year we had a family team. It was my coach, my grandpa, my mum and dad [as admin and team manager] and me. It was a five-person team, and then we were driving with a Tony Kart chassis and TM Racing engines. And we actually achieved one podium in Sarno, a second place in the WSK Euro Series. 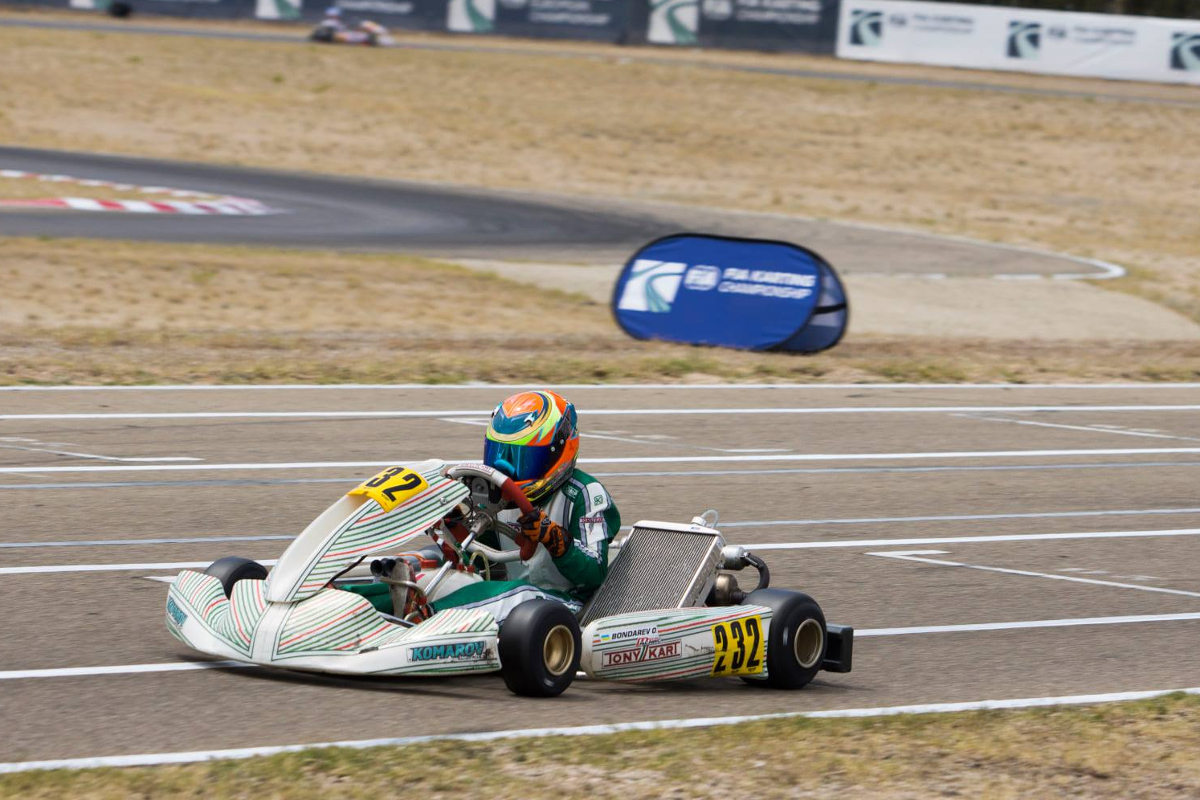 “I haven’t really been able to talk to anyone [from Ukraine who’s an ex-racer], but a lot of people from my family, like my grandpa, they know already a lot about racing even though they weren’t a driver. So I was able to talk to them, but otherwise I was kind of on my own.

“My grandpa was doing the data and the telemetry, and also he was filming videos of me driving. And then we would watch them after the race and analyse the bad things that I did.”

Was there any support from kart manufacturer Tony Kart? “We just bought the chassis and that was it.”

Bondarev started his junior karting career with his tiny crew by finishing runner-up in the 2020 Trofeo Andrea Margutti. In 2021 they then came seventh in WSK’s Euro Series and 10th in its two-round Open Cup, 21st in the CIK-FIA European championship and made the final of the CIK-FIA World championship at Spain’s Campillos circuit. They drove all around Europe together, and “they were fun, but they were really exhausting” roadtrips due to the intensity of the karting schedule.

“We had a plan to have only two years in OK-J. So we wanted to in our privateer team teach me all the basic driving techniques, and when I come to a big team like RFM I can already start showing the results straight away.

“Of course learning how to battle in races is very important because it’s very important not to crash in any races, because if you crash and spoil the race you already ruin the whole weekend. So we started with that actually, and then it was like the smoothness of the driving because in OK-J if you miss the corner then the whole lap is ruined. Not like in Minis for example. So all those basic things we did, and I was improving every race last year.”

RFM is best known for taking Norris to the 2014 CIK-FIA KF Karting World Championship, and usually has one of the best line-ups on the international karting scene so to land a seat at the team was a vote of confidence from its eponymous boss. 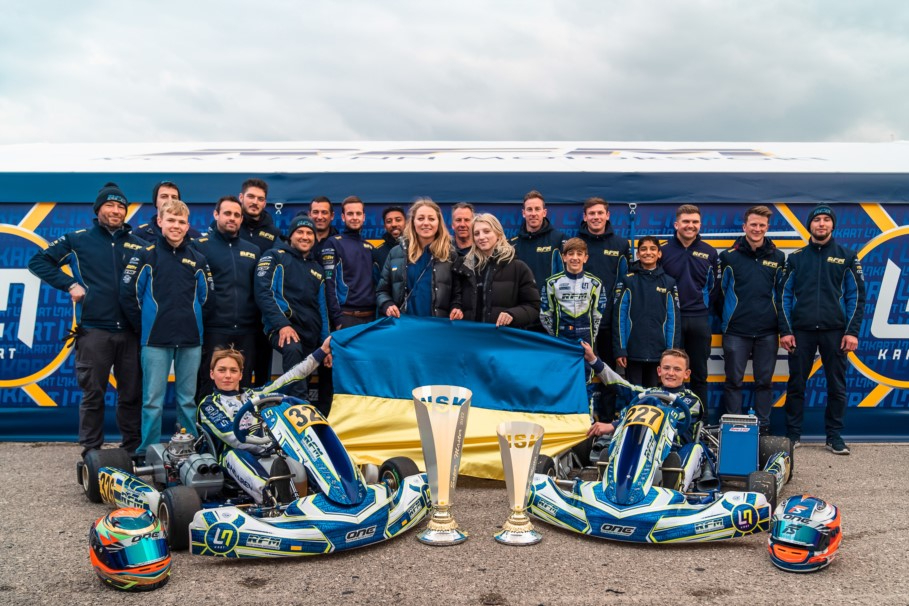 “My mum called Ricky to see if we can join RFM,” Bondarev recalls of how his 2022 move was instigated. “The thing is that we were watching each other throughout the whole season. Ricky was watching my results, we were watching the team results, and then we got together.

“It feels really nice [being on a LN kart] because Lando is already a F1 driver, so you can take some things from [watching] him. You watch his races, he came to a race last year, although I wasn’t with RFM yet. It feels awesome.

“Of course Lando is one of my motorsport heroes, because he was one of the youngest drivers to F1 in recent years. He already went to McLaren, and I really like McLaren. From past and present, I also really like Sebastian Vettel.”

It wasn’t just privateer efforts that put Bondarev on the map in 2021, as he also competed in the nation-based FIA Karting Academy Trophy which uses spec Exprit chassis and Vortex engines. The Wackersdorf season opener in Germany didn’t go to plan until the final, where he climbed 17 places to finish eighth, then at Adria in Italy he won two heats and rose to third in the points with third place in the final. In Sweden’s Kristianstad finale he moved up a spot in the standings by coming second in all his heats, and led the final’s first half. He spent the second half of the decider defending third from Romania’s Darius Babaioana, and not long after eventually being passed he spun out, consigning him to third in the championship.

“It felt really nice representing my country there. Especially this year with the war and everything, it’s been very important to me to still show the results in these races and show that Ukraine has a winning spirit,” Bondarev says.

“It’s very good for the Ukrainian driving scene that are there are drivers in the WSK and the FIA already [such as Yaremiy Oleksiy and Mark Brovko]. So they do celebrate. A lot of people write comments to me.”

“It feels really important right now [to be free to race and to get strong results] because all the people in Ukraine are in a very hard situation right now. So I’m trying to show everyone, even in the karting world, that I can still show great results in racing, which is not the strongest sport in Ukraine.” 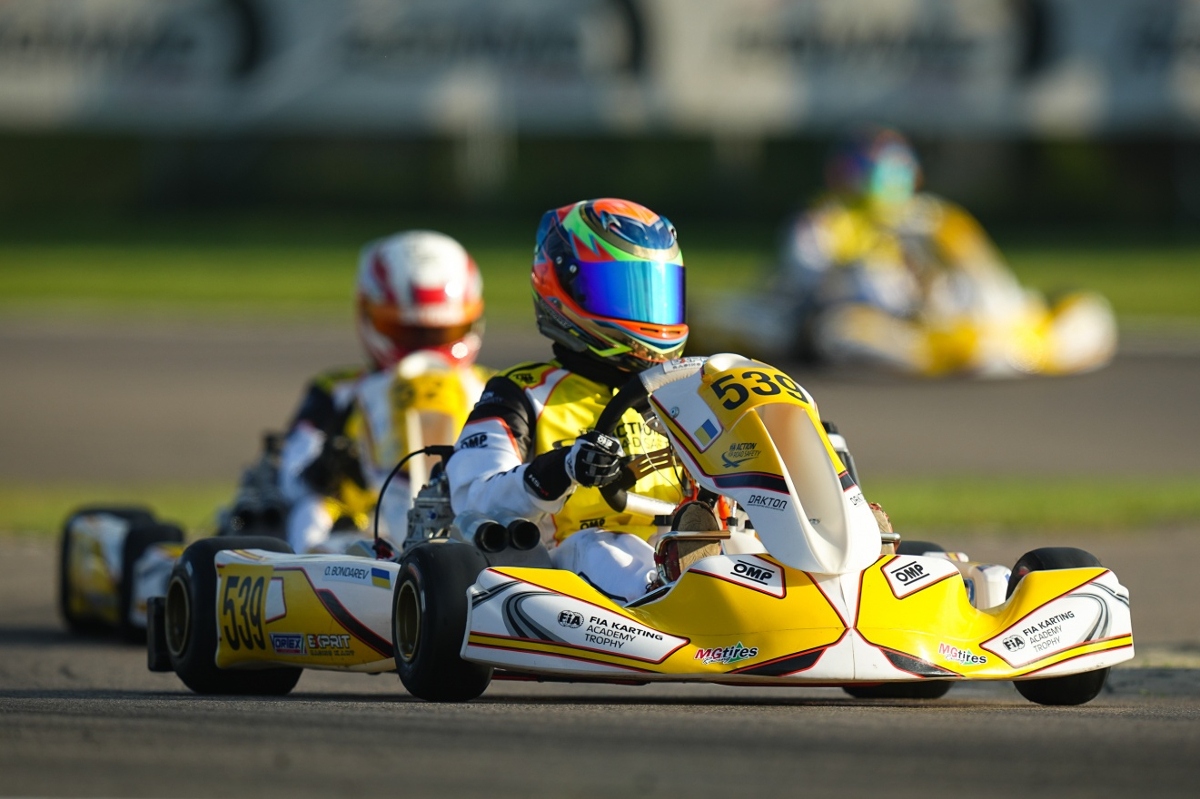 Combining the results of the past two years, the experience gained driving as a privateer and with one of karting’s biggest teams, the ability to speak five languages fluently (Ukrainian, Russian, Spanish, Italian and English) and the fact that aged just 12 he is handling both the usual pressure of international sport and the additional stress brought about by representing his nation while also seeing it come under devastating attack in real time, it’s remarkable that right now no Formula 1 junior teams or major driver management companies are in contact with Bondarev, but “we hope that if I continue showing great results, then I am going to receive some contact from the big teams”.

His multilingual skills come primarily from living in Spain and Italy as his karting career became more busy abroad. While he raced a kart for the first time in 2014, he didn’t do so frequently until 2015 in micro karting.

“In Ukraine there are three circuits, and it wasn’t many drivers in each category, probably like 10 or 15,” recalls Bondarev. “So I drove there for two years, and then we immediately decided to move to Europe because I have to improve.”

There were two years living in Spain, the second spent racing in Italy before he moved there during the COVID-19 pandemic to make travel easier, and Bondarev’s studies are now online. The infrastructure to do that is a byproduct of the pandemic, and has helped him juggle karting and school commitments without the two clashing mentally or logistically.

There’s a brief break before Bondarev returns to track for CIK-FIA competition, and he will do the WSK Euro Series again too.

Next year he will step up to OK karts, and “most likely I are going to stay with a big team”. He will “at the same time do some KZ and Formula 4 testing” and once he turns 15 the plan is to do “a whole season driving in F4″ in 2024. After that, “if we’re really fast” the aim will be FIA Formula 3, then of course to become the first Ukrainian to race in Formula 2 and F1. 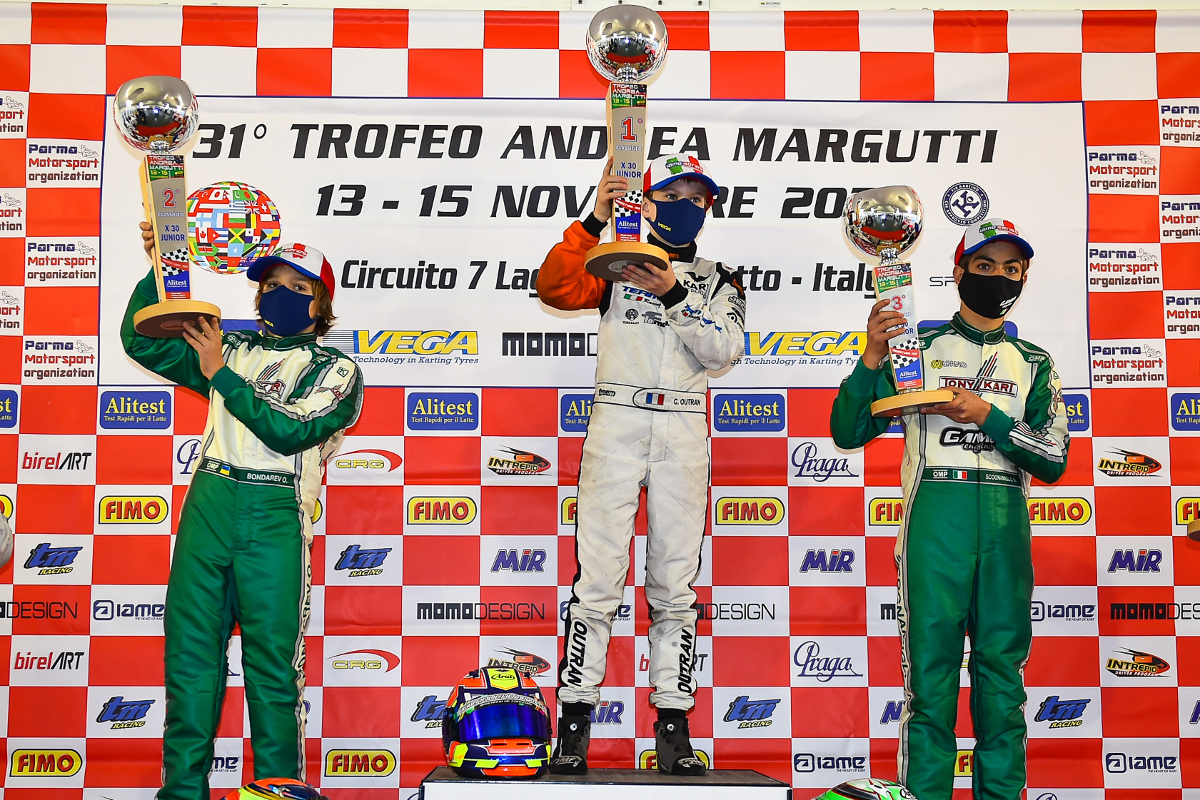 Why F2 testing hinted at who will be at the front, but F3 did the opposite

Charouz: the independent Czech team with big ambitions in F2 and F3