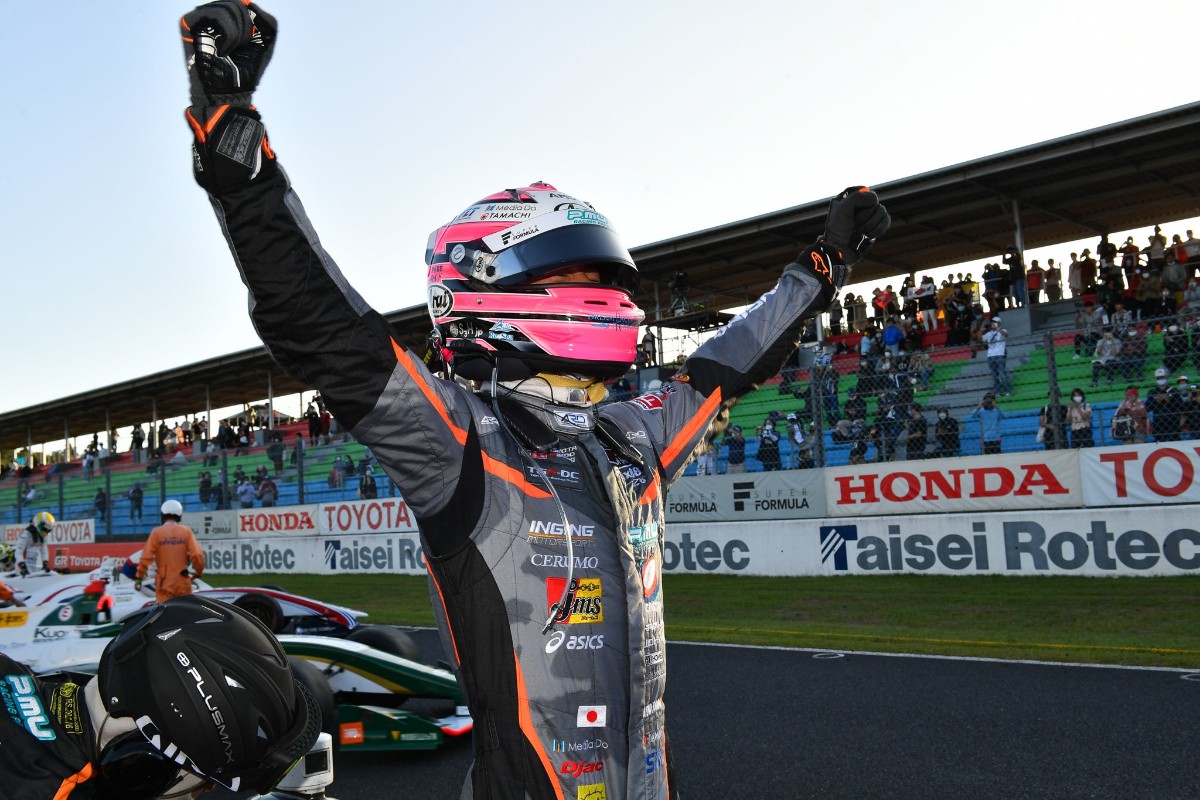 First-time Super Formula race winner Sho Tsuboi said he was crying as he crossed the line to take victory at Okayama, having been ‘heartbroken’ after crashing out of qualifying.

The INGING driver, in his sophomore season after stepping up from Japanese Formula 3 where he won 26 races across three years, is now up to second in the SF points despite retiring from the Twin Ring Motegi season opener due to opening lap contact.

At Okayama he was second fastest in his qualifying group, then third fastest in Q2 to go through to the pole position shootout. He failed to set a flying lap in Q3 after crashing, leaving him eighth on the grid.

A great start immediately put him in the lead battle, and he used the undercut strategy to pass Impul’s poleman Ryo Hirakawa. He then passed INGING team-mate Hiroaki Ishiura just after he pitted, and inherited the lead when TOM’S driver Nick Cassidy pitted with two laps to go.

“I couldn’t run even one lap in the race [at Motegi], and although I was in good shape in Q3 this time, I crashed due to my mistake, which caused a lot of trouble to the team and also broke my heart.

“I fought with the desire to have a good race today, but the position I was in the first corner from starting eighth was so good that I wasn’t involved in an accident and was in second place there [after the second corner]. Today’s highlight I think is there.

“After that, the pit work [for changing tyres] was very quick and went well, and I passed Ryo Hirakawa. After that, when I overtook Ishiura, his tyres were fresh, so it was quite tough but I managed to defend [the position], and I think it was really good to win in the end.”

Ihiura followed Tsuboi home to make it an INGING one-two, with Cassidy finishing third after his late stop. Both of the INGING drivers credit the work of their pit team for their result

“I was watching Hirakawa, but he didn’t enter the pits on lap 10, so I pitted then,” added Tsuboi.

“As a result, the strategy snapped into place. I think the reason I was able to overcut was because of the speed of the pit work.

“[It was my first victory] I was already crying when I received the chequered flag. I finally settled [those tears] in one lap.”

Tsuboi sits 14 points behind Hirakawa, who finished the race in fourth, and shouldn’t be hurt too much by his Motegi retirement as SF is enabling drivers to drop scores from two of the seven rounds this year due to races being missed by quarantine and travel restrictions set by Japan.