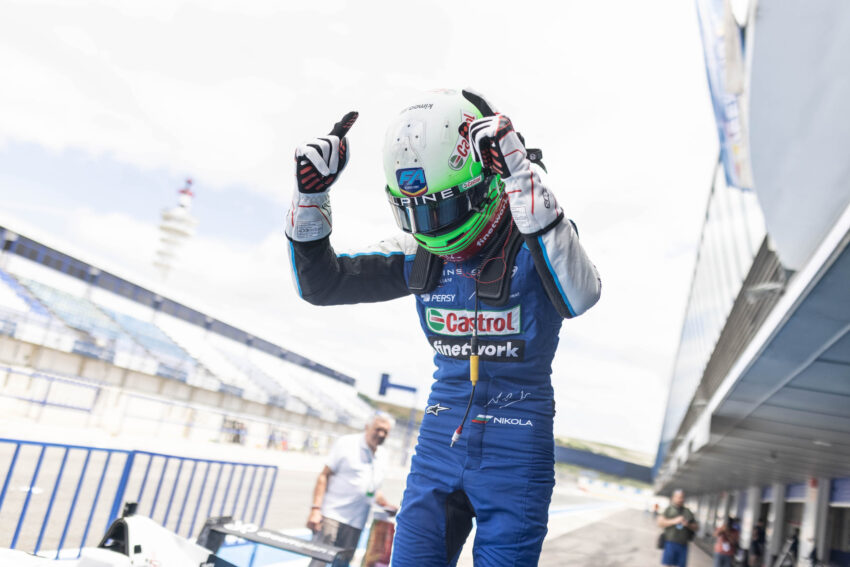 Tsolov was fastest by 0.516 seconds in the Saturday session, marking the third straight he has been half a second clear of the field in qualifying.

It was Formula de Campeones duo Alvaro Garcia and Max Mayer who were the initial pacesetters, before free practice two topper Gael Julien moved to the top for Drivex School with a 1m36.216s laptime.

He was on provisional pole for less than half a minute though, as Tsolov broke into the 1m35s. Julien responded though, setting a 1m35.628 to reclaim top spot before red flags were brought out after MP Motorsport’s Sebastian Gravlund stopped in sector three of the lap.

Tsolov returned to first place when qualifying restarted, a 1m35.214s lap putting him ahead of Campos Racing team-mates Georg Kelstrup and Hugh Barter. Julien improved but was shuffled down to fourth place, but he moved back up to third with two-and-a-half minutes to go.

MP’s Kirill Smal then shuffled him back down a spot as he went second fastest, two tenths slower than Tsolov. In the final two minutes there was then even more improvements, with new Campos signing Manuel Espirito Santo and MP’s Timoteusz Kucharczyk jumping up to second and third.

Tsolov had pace in hand too though, with his 0.059s advantage at the top ballooning to 0.516s at the end as he posted a 1m34.625s. No other driver was able to lap sub-1m35s, although Julien did earn a front-row spot for race one by finding more time.

Barter and Kelstrup got into fourth and fifth in the closing seconds, between Espirito Santo and Kucharczyk, with Filip Jenic (Campos), Mayer and Smal just behind him. The gap betwen the top two was the same as the one that covered second to 16th.

A grid penalty knocked Smal down to 14th on the race one, but his second-best laptime was good enough for seventh on the race two grid. Tsolov takes pole by half a second again for race two, with Espirito Santo third and Jenic just behind in fourth while Barter is down in 10th.