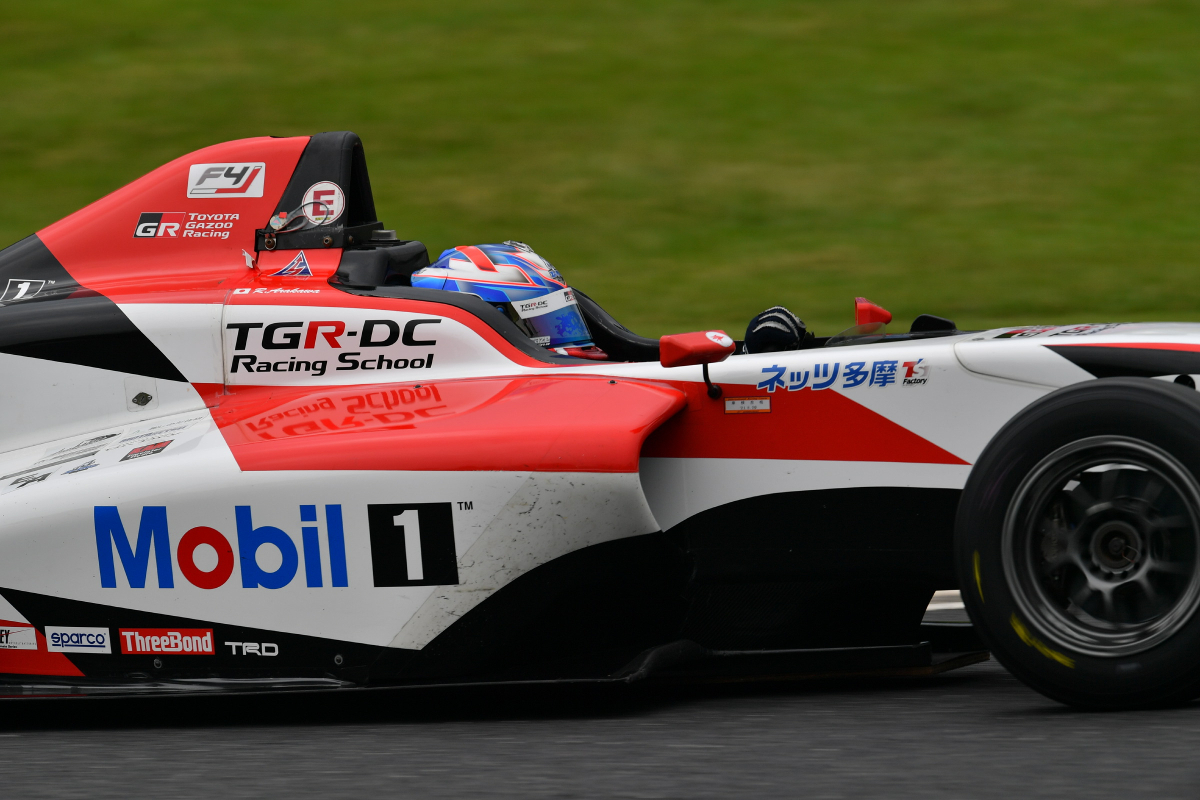 Rin Arakawa has moved into the Japanese Formula 4 title battle with victory in Sunday’s race at Suzuka.

The Toyota junior didn’t actually finish first on the road, but profited from a five-second penalty for on-the-road winner Iori Kimura to take maximum points.

Honda junior Kimura, who won Saturday’s race, took pole and led Arakawa’s team-mate Seita Nonaka up front through the first lap as Arakawa was shuffled from second on the grid to fourth by Nonaka and Honda Formula Dream Project team-mate Syun Koide.

Kimura had to defend from Nonaka going into turn one on the second lap, while Arakawa almost lost further ground by going wide at the hairpin. He recovered well not to lose a place, and was actually attacking Koide before the safety car was called out when Katsunori Keihara spun off.

On the restart Nonaka already alongside Kimura as they crossed the start/finish line and around the outside as they reached turn one. Just behind, Koide and Arakawa ran alongside each other too. Both Nonaka and Koide slipped off track, with Koide putting his wheels in the gravel on the outside and spinning and Nonaka dropping to fifth.

Arakawa moved back into second, a position he held until the end of the 11-lap race when it was revealed that Kimura had a penalty for his defence against Nonaka on the restart. A maiden victory therefore went to Arakawa, while Kimura dropped to fifth behind team-mate Kakunoshin Ohta, Seiya Motojima (Saccess Racing) and Reimei Ito (OTG Motor Sports).

Motojima got ahead of Ohta on the restart lap with a great move down the inside of the right-hander before the hairpin, but Ohta got back by at turn one next time by.

Behind the top five was a three-way Toyota junior battle until the penultimate lap. Eijiro Shimizu and Jiei Okuzumi both attempted to go down the inside of Nonaka into turn one, and Shimizu in the middle made it to the apex ahead. However his car then became unstable, and the rear end went completely over a bump that sent him into a spin.

Nonaka on the outside also hit the bump as he ventured onto the run-off, and had to slow to avoid Shimizu’s spinning car ahead. That left Okuzumi free to take sixth, with Soto Ogawa (Skill Speed) finishing seventh and Nonaka recovering to eighth. Ogawa was then penalised five seconds post-race that dropped him to 12th, and Teppei Tsuruta was disqualified from 12th place.