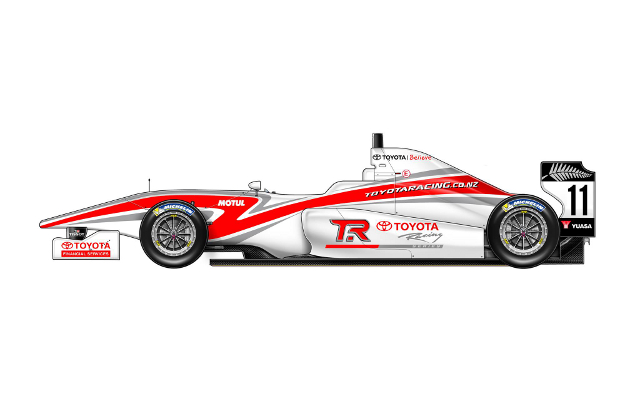 The Toyota Racing Series has unveiled details of its new car which will be used from the 2015 season.

Named the Toyota FT50, it will replace the FT40 model that has been used for the first ten years of the New Zealand championship and like its predecessor, is designed and built by Italian firm Tatuus.

The car will use the same 1.8-litre engine as the outgoing car but feature updated styling, wider track suspension, dual front shock absorbers and a paddle shift-operated gearbox.

“The FT50 racer will be an exciting prospect for aspiring Kiwi racing drivers as well as the young international drivers who will look to race here in TRS,” said series manager Barrie Thomlinson.

“The car will feature up to the minute design and technology and align with many of the established global series already in operation across the globe.”

TRS said that a completed car is expected to begin testing by May.

“The new car represents a significant ongoing commitment by Toyota to the development of the next generation of New Zealand drivers and to the health of motorsport in this country,” said John Fowke of Toyota New Zealand.

“As TRS graduates prepare to enter Formula 1, Le Mans and other professional global series we recognise the crucial role TRS has played over the past decade and the need to continue providing a championship where young drivers can advance their career and develop their talents.”

2011 TRS race-winner Daniil Kvyat will race in F1 this year for Toro Rosso, while Kiwi Brendon Hartley – a graduate of the first TRS season in 2005 – has become a driver for Porsche’s new LMP1 programme.