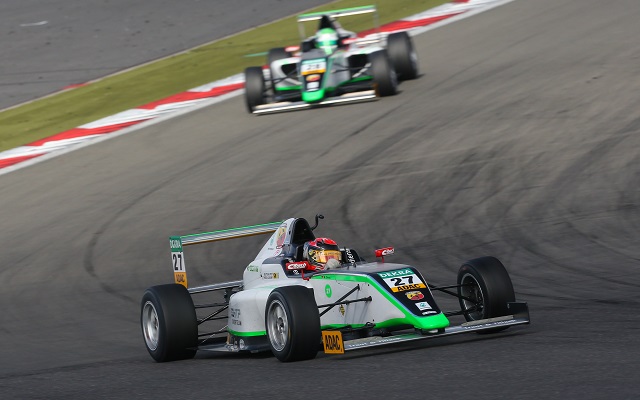 Marvin Dienst collected his fourth and fifth poles in ADAC F4 by dominating the qualifying session at Sachsenring.

The HTP Junior driver will be joined?on the front row by his main championship rival Joel Eriksson for both the first and the second race.

Part of the second group session, Dienst managed to beat Eriksson’s prior benchmark in the first ten minutes before a red flag was caused by Jason Kremer.

Once back under green, Dienst took full control, building a lead of 1.5s after a series of fastest laps. Although that shrunk to six tenths by the checkered,?he was still easily the fastest driver on track.

Eriksson had topped group A in a session which was interrupted three times, twice for Moritz Muller-Crepon and once for Marilyn Niederhauser. The Swede eventually edged?out Tim Zimmermann by a tiny gap of 0.002s during the final seconds.

As such, the German will have to settle for fourth?on the grid for race one, starting ahead of his Neuhauser teammate Kim-Luis Schramm on row three.

On second-best times, the top three remains unchanged, with Schramm taking fourth ahead of Beckmann and Zimmermann.