Karting is the training ground of most drivers before they race in single-seaters, and so it’s always useful to check up on what’s happening in the major championships to see what future talents may be eventually bursting onto the scene.

The CIK-FIA World and European championships are the main focus of the karting world, and champions are invited to the same prize giving gala as the winners of Formula 1, Formula 2 and Formula E. That’s not to say that’s the only location of talent in the karting world, with the WSK-organised events focused in Italy always providing a hotbed for top drivers, and several national championships rivalling the continental series for talent, if not drama. 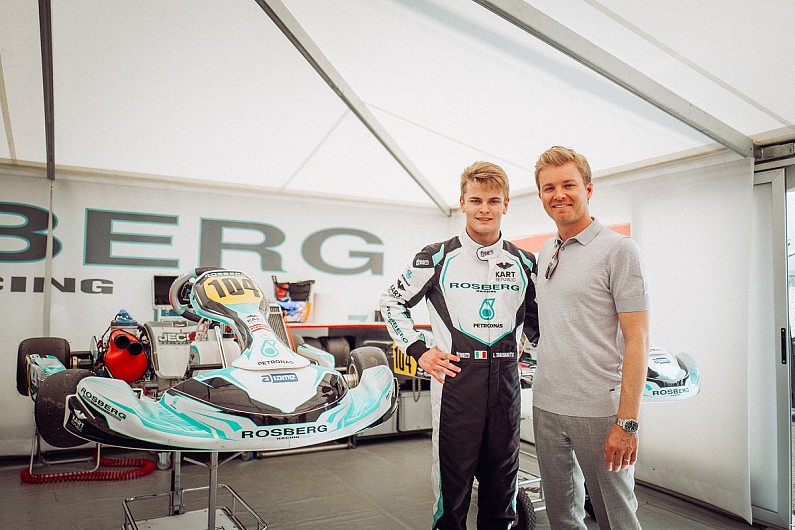 Nico Rosberg’s newly created karting academy had success straight away this year when Travisanutto became world champion with Dino Chiesa’s KR Motorsport. The Italian was in the top three in the WSK Final Cup and European championship in 2017, having won the WSK Super Master Series and Final Cup the year before, and was back on top in his third season in the OK class. He was Final Cup champion, despite retiring from the final in two rounds, and won the world championship by 0.446 seconds at Kristianstad in Sweden.

In addition to Rosberg’s backing, the 19-year-old is coached by Didier Andre, a Le Mans 24 Hours winner. According to Andre, Travisanutto was doubtful of whether he could win in Sweden, but the victory marked a step in maturity for the Italian. Next year he’ll switch to the AMG-supported HTP outfit. 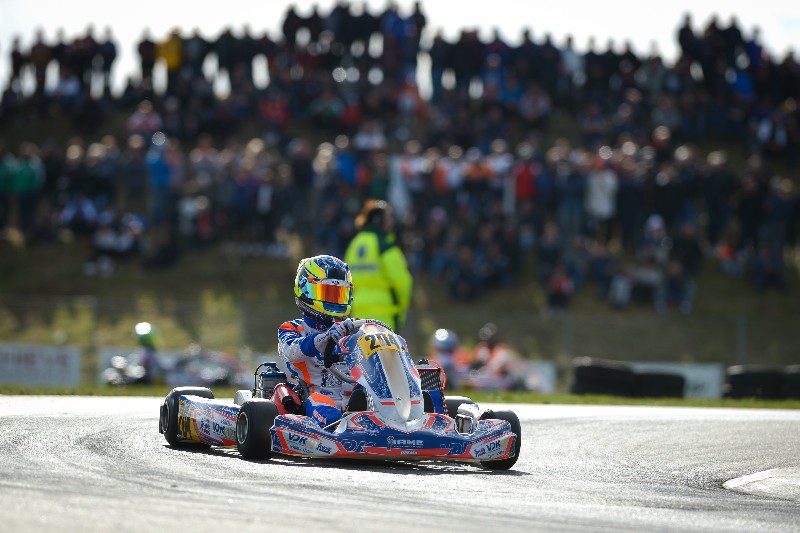 After winning the Nationale class of the French championship last year, Bernier moved up to more powerful karts, and upped his game in the process. The Rotax Max title came at a relative canter, and put the 14-year-old in good stead for the season-ending world championship event.

Although Bernier drove for VDK Racing, a relatively small Belgian outfit, the team had success on the global stage thanks to Victor Martins’ 2016 title in the OKJ class, and had picked arguably the best set up for Bernier in the world championship final, which started on a damp track. An incorrect positioning of a front fairing dropped him to fifth on the grid, but he had the best kart in the first half of the race and made it into the lead.

From then on it was a race management, and he held off Gabriele Mini to become world champion. A step up to OK had seemed likely, but Bernier instead seems set for an early move up to French F4. 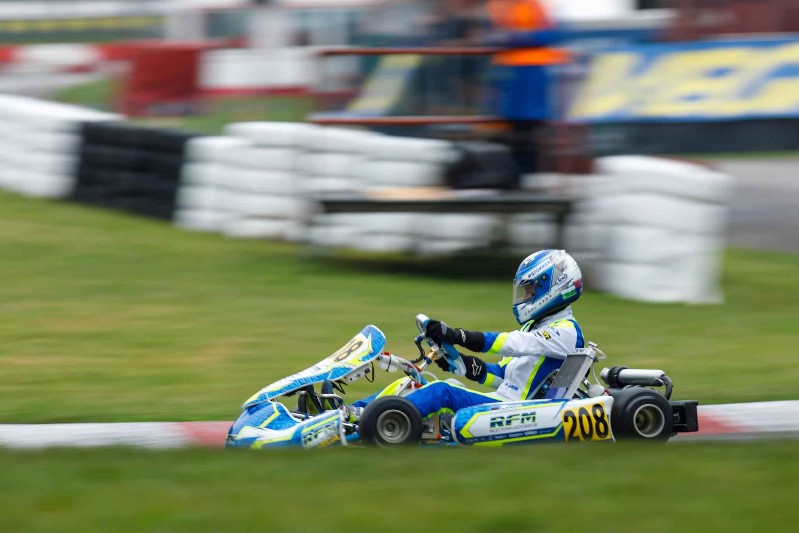 Younger brother of European Formula 3 star Ralf, this 14-year-old Estonian had already caught the eye of Formula Scout, and may eventually be under the wing of Marko Asmer, who brought Aron and Red Bull junior Juri Vips into single-seaters.

Aron’s achievements are making history in his home country, and he will attempt to add to them next year in OK class karts.

This year has been spent in OKJ with the crack Ricky Flynn Motorsport team, where he beat new Nicolas Todt protege Mini to the European title in a season-long battle. One of the key factors to that triumph: having learned from brother Ralf’s mistakes. He’d already tasted success in 2018 though, starting the year with victories in the WSK Champions Cup and South Garda Winter Cup in Italy. 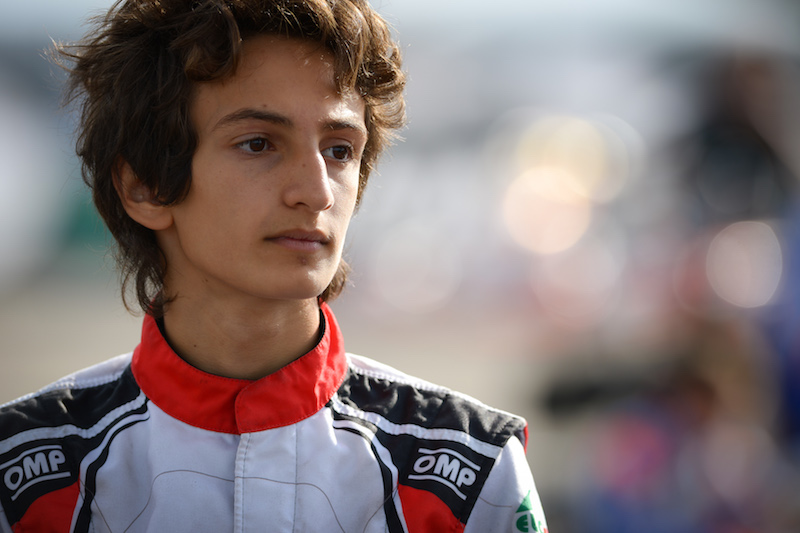 Nicolas Todt’s latest protege, following the likes of Felipe Massa, Jules Bianchi and Charles Leclerc, was unlucky not to be a multiple international champion this year.

The 13-year-old Italian did win one title – the WSK Super Master Series in the OKJ class, and even that was secured by the closest of margins. As one of the younger drivers, Mini showed impressive resolve in these high-stake title fights, no doubt one of the reasons Todt signed him, and in the world championship he drove through the field to just lose out to Bernier.

That form was carried over from the end of the European season, where we was the fastest on track but cane short of Aron’s points tally. Mini’s age means he’ll remain in karting for 2019, continuing is rivalry with Aron in the OK class. 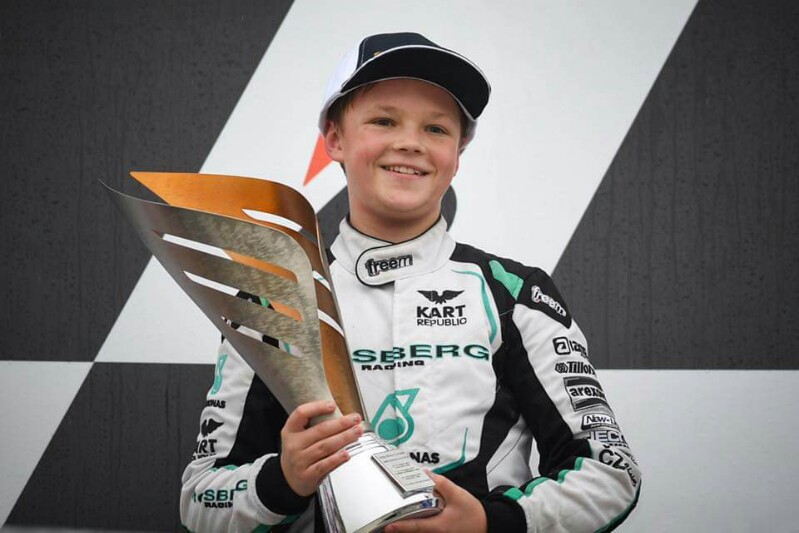 Another Rosberg protege, Barnard’s first season in OKJ karts was an undoubted success. Having a Formula 1 world champion’s name on his overalls added an extra level of pressure to Barnard, but he performed, and he’ll remain with KR Motorsport next year to improve on his 2018 trophy haul.

His main programme was the CIK-FIA European championship, which proved to be a struggle but a huge learning process on an international stage. He had one highlight, and in front of the biggest audience, as his performance in the World championship heats, held in tricky weather conditions, put him on pole for the final.

He controlled the first third of the race, and after being passed by Bernier led the battle for second thereon. In the closing laps he succumbed to those behind, and ended up 1.695s off victory in fourth.

Barnard was the star of the end-of-year WSK Final Cup, applying everything he’d learned in his CIK-FIA appearances to convincingly win the three-round Italian-based championship, adding to his 2017 IAME Cadet British title. 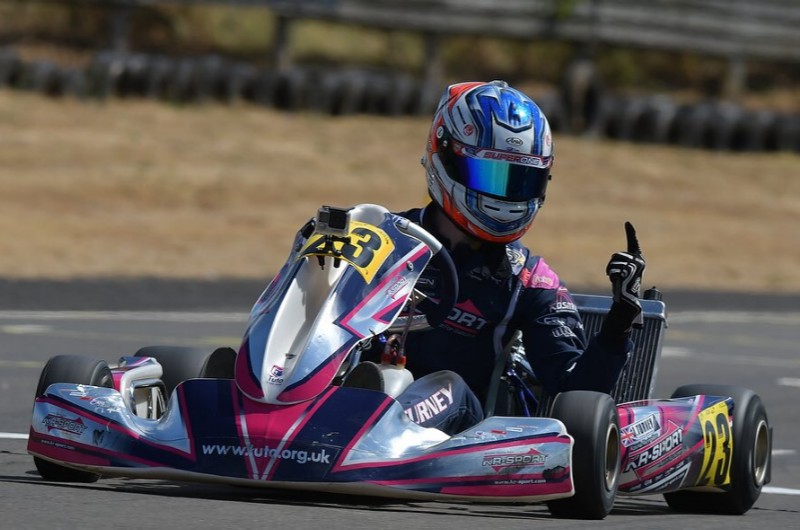 Turney didn’t make his name in CIK-FIA championships this year, instead impressing in Rotax karts.

Already a British champion, he almost added two more titles to his home tally in 2018. He won in Senior X30 with KR-Sport, and came three points short of the Senior Rotax crown. In the latter he beat the likes of Arden-backed Tommy Foster. Turney competed in both categories in the British Kart Grand Prix, this time winning the Senior Rotax race and losing out on the Senior X30 win to factory McLaren driver Ben Barnicoat and fellow karting veteran Oliver Hodgson.

In October he became Benelux champion, and a week later headed to Le Mans for the IAME International Final, where he became Senior X30 world champion. He immediately started preparation for a campaign in the WSK Final Cup’s OK class afterwards, which started the next week.

He was one of the fastest in round one, and a crucial break before round two meant he could turn that into third place in the final. He couldn’t repeat that in the wet championship decider, and ended 10th in the standings. His year ended by winning the Motorsport UK Young Driver of the Year, the first karter to do so, and impressing in an Italian Formula 4 test. 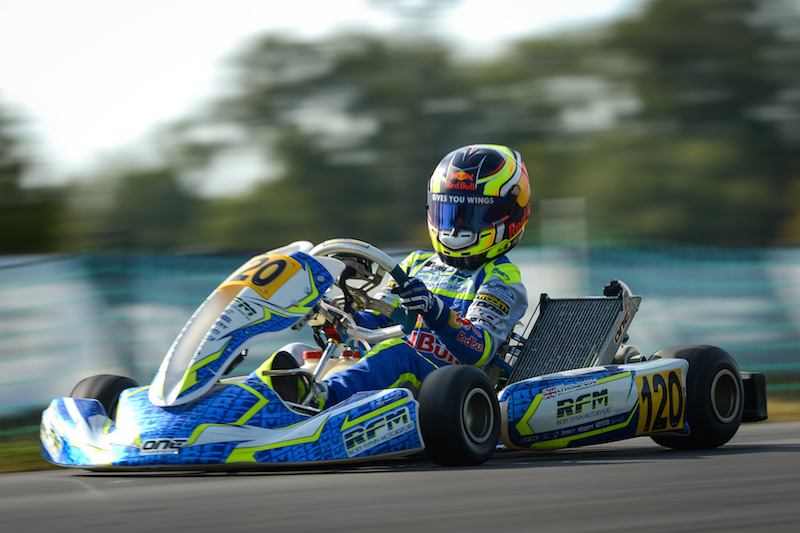 Already an outright Red Bull junior, it’s fair to say Thompson is hot property, as proven when he was selected as the FIA’s 2018 Karting Rookie of the Year.

Although his world championship weekend didn’t go to plan, his first season at OK level was otherwise Lando Norris-like in execution, only being beaten to the European title by Hannes Janker, who’s been karting at that level since 2013. Before making his OK debut, he made one last OKJ appearance in the WSK Champions Cup, being beaten to victory by Aron by just 0.233s.

Alongside his international OK commitments, Thompson also dominated the German Karting championship, following up the British and World titles he won in X30 Juniors last year that attracted Red Bull’s attention. Too young for most car series, he’ll return next year for a second season in OK with those European and World titles in his sights. 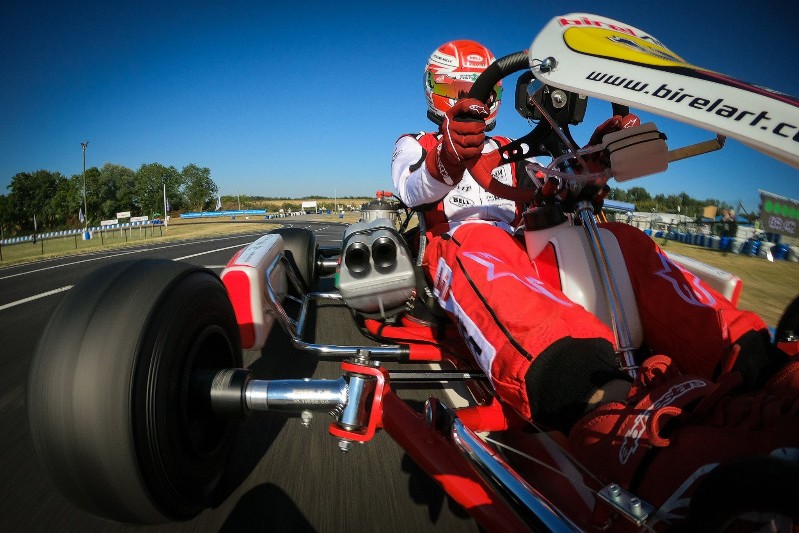 Coluccio recently came close to winning a drive in French F4 put up by Nicolas Todt and Richard Mille, having been Birel ART’s biggest star on the global stage in 2018, excelling in his first season of OK karting.

The 15-year-old certainly came on as the year went by, with victory in the WSK Open Cup in June starting a run of good form in the second half of the year which included third place in the world championship, and strong points scoring results in the European championship and WSK Super Master Series. His singular WSK Final Cup appearance also occurred late on, and he would’ve been top six in the standings had he contested the full championship.

These results showed a different karter to that who finished 11th in the WSK Champions Cup in January, testament to how Coluccio improved through the year. 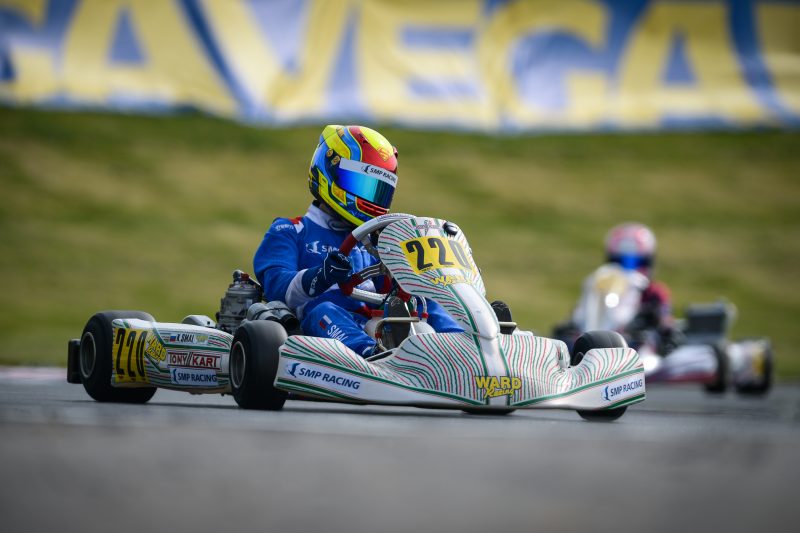 With Sergey Sirotkin out of a Formula 1 seat, it looks like European Formula 3 race-winner Robert Shwartzman and 13-year-old Kirill Smal are SMP Racing’s best F1 prospects for the future.

Smal was in contention for victory in everything he competed in, and it was arguably his inexperience that prevented high profile victories. He drove from 15th to finish fifth in the world championship in the OKJ class, and set the fastest lap in the process. In karting, being the fastest over a lap in such an event is some serious bragging rights.

Disqualification from the British round set him back in the European championship, but he was still seventh in the standings with Ward Racing. In WSK events he finished third in the Champions and Final Cups, being the top non-Ricky Flynn driver in the former. In the Super Master Series he was fourth, and was the winner of the mid-season Open Cup.

Gabriel Bortoleto?was third best OKJ driver in the World championship, and was looking up from a lower step of the podium on many other occasions, finishing third in the European championship. At least the Brazilian finished second in the Super Master Series, but ended up 19th in the Champions Cup after qualifying sixth for the final.

Supported by the Mercedes F1 team,?Andrea Kimi Antonelli starred in Mini karts this year, the step below OK Junior. He won the Champions and South Garda Winter Cup early in the year, and was on pole for the Open Cup but dropped to sixth. In the Super Master Series he finished third, with?Martinus Stenshorne winning that and Open Cup titles. Antonelli also had a competitive OKJ debut in the Final Cup in Rosberg’s colours.

Scotland’s leading karter?Dexter Patterson couldn’t follow up his 2017 CIK-FIA World championship OKJ title, but his rookie season in OK karts was no failure, finishing fourth in the world championship and eighth in Europe. He was the second best Briton in the Super Master Series, where Red Bull junior and Jenzer Motorsport F4 signing?Jonny Edgar finished third overall. 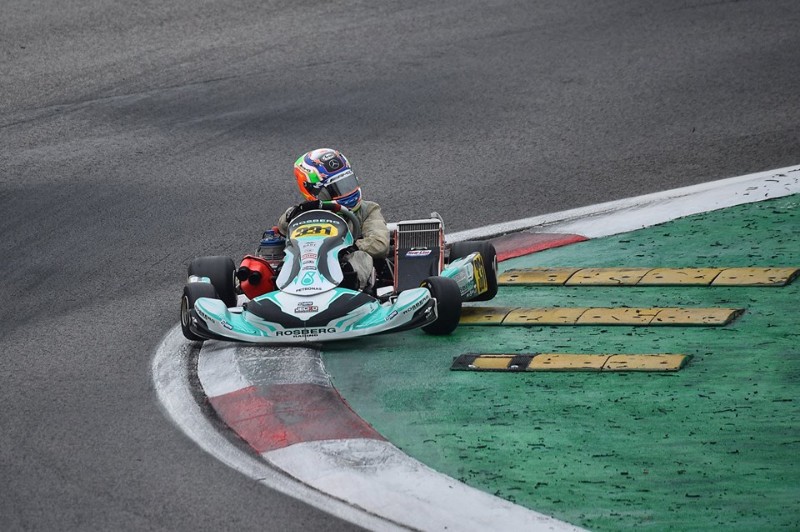 Senna van Walstijn‘s name may suggest he’s connected to the Brazilian, but the Dutchman is more likely to be the next Max Verstappen. The 15-year-old won the Senior classification of the Rotax Grand Finals in Brazil from seventh on the grid, and was one of the top drivers across Benelux’s karting championships.

Expected to move up to British F4 with Carlin next year,?Zane Maloney?is North America’s top karter, and comes from Barbados. He finished third in the Champions Cup and fourth in the European championship in the OK class, and was runner-up in America’s top karting championship, the SKUSA SuperNationals, in a Senior X30 kart.

It’s rumoured that Fernando Alonso will be putting 16-year-old Spaniard?David Vidales in his Eurocup team next year. The 2017 World championship runner-up in the OK class finished sixth in this year’s European championship and ninth in the world championship, before switching to KZ2 machinery. With very little experience he was able to take third in the FIA International Super Cup.