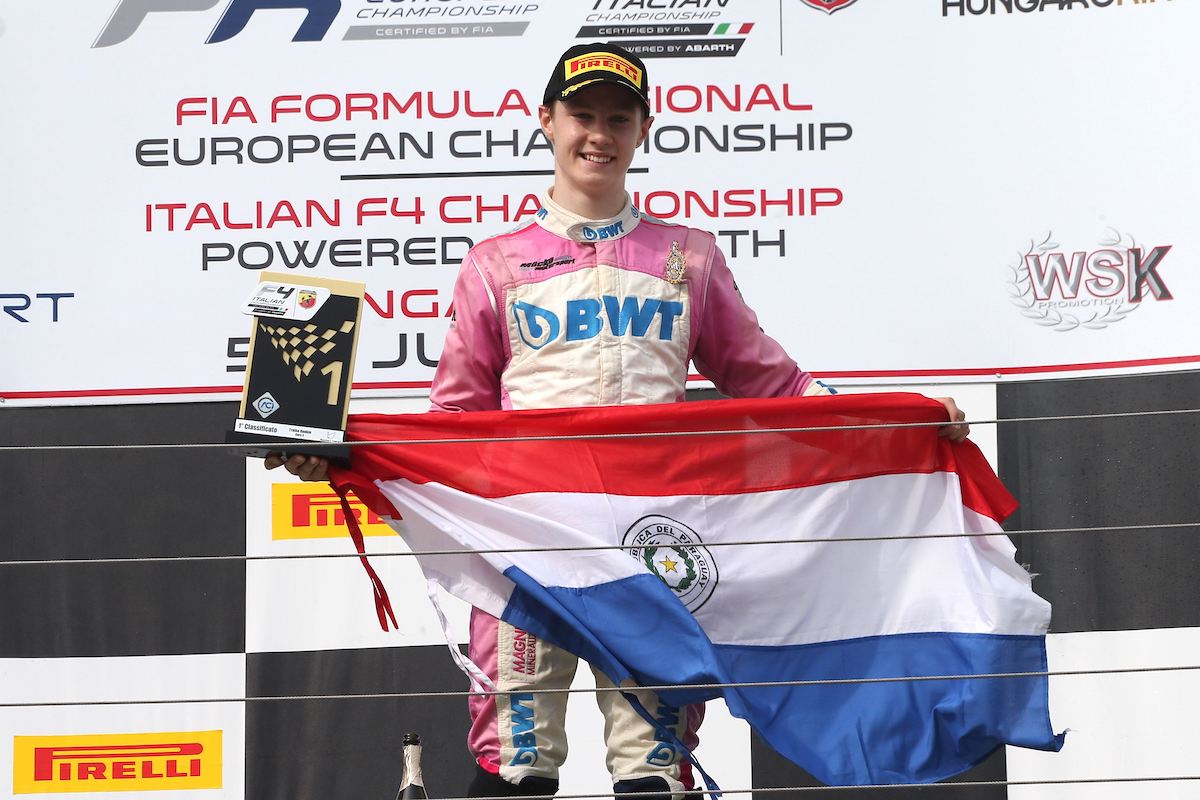 Joshua Duerksen has been flying the flag for Paraguay in Formula 4 since last year. It’s a country with little single-seater racing history, but like most of South America is extremely passionate about motorsport

Argentina and Brazil have produced Formula 1 world champions; Colombia and Venezuela exported F1 race-winners in the last two decades, Chile and Uruguay sent drivers to F1 and IndyCar; Ecuadorian-born Juan Manuel Correa has made it to Formula 2; and Bolivia and Peru have a strong record for driving talent when it comes to international rallying.

Of the large South American nations, there is one glaring omission when it comes to producing motorsport stars: Paraguay.

There are a few from the country who have raced tin tops at varying levels across their home continent, but none of them have used that as a platform to then take on the rest of the world – as Argentina’s Jose Maria Lopez did by winning world championship titles in touring cars and racing in Formula E after success in his home country’s Super TC2000 series.

Joshua Duerksen became Paraguay’s first overseas single-seater racer in practically two generations when he debuted last year, and his national anthem has been heard nine times across the ADAC, Italian and United Arab Emirates Formula 4 championships since then – only one less than the rest of the South America’s nations combined.

“In Paraguay, almost all of the drivers go to the rallies because that’s really popular in Paraguay. But I decided to go the way of the tracks and circuits, because I loved also F1. My dream is to be an F1 driver,” Duerksen tells Formula Scout.

“With some help, I could start my steps in F4, first with some testing in South America, and then moving to Europe to start a new chapter in my life.

“There’s not a lot of karting [in Paraguay], there’s just one track, but with many circuit options. Paraguay does not have so much money, and motorsport is not a top sport in Paraguay, soccer is a level higher than motorsport. There are also very good drivers, so to get this opportunity to drive here in F4 is very, very special.” 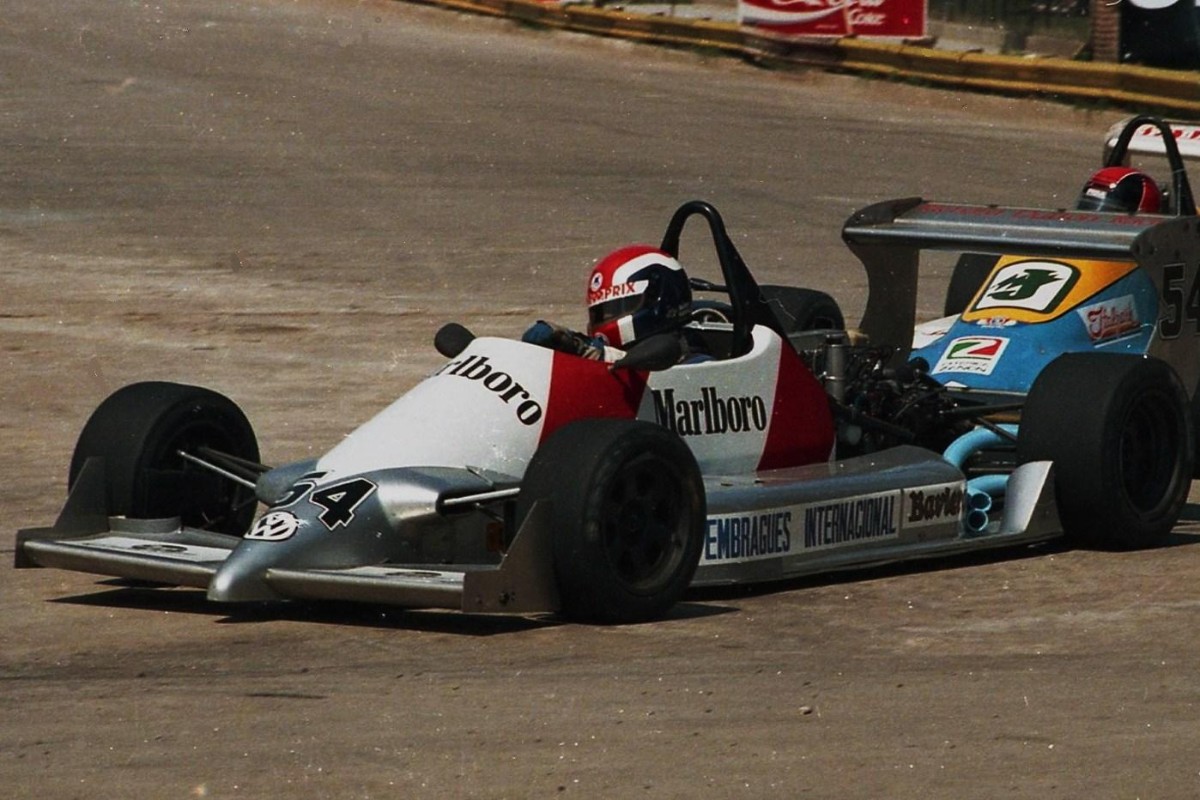 Given Duerksen’s trailblazing status, who could he talk to in his home country for advice?

“There was one Paraguayan that could drive a F1 car, it was Danny Candia. He helped me into the karting, and he also helped me to move to F4, and he was the only Paraguayan to also drive a F1 [car]. So he has a lot of experience. I think he has [many] years in Europe racing, so he knows how it works here. And thanks to him, I could be better, I could understand better how it works here.”

Candia, now in his 60s, was Paraguay’s top driver in the 1980s. He raced in Codasur F2, a series that could be best described as South America’s answer to Indy Lights at the time (not that the continent had an IndyCar equivalent) and was primarily populated by the Berta Mk2 car and a variety of engine suppliers. It raced in Argentina, Brazil, Chile and Uruguay, and attracted Candia and his Peruvian contemporary Ernesto Henry Jochamowitz Endesby Martinez.

It was succeeded by Formula 3 Sudamericana for 1987, and that series ran continually into the early 2010s.

In the inaugural F2 season, Candia entered the early-season races in Chile and Argentina and took a best finish of ninth to end up 30th (out of over 50) in the points. He scored his first point the next season to rise to 25th in the points, but retired from his single appearance in Punta del Este in Uruguay – a regular venue for tin tops and FE decades later – in 1985.

Candia then continued on into F3 SudAm, cameoed in Indy Lights a decade later before a spell in tin tops, and then raced in sportscars in Europe for several years in the 2000s and 2010s. His F1 test actually came in Renault’s 2008 car at the end of 2010. That probably attracted more interest than when he was a young driver, whereas Duerksen has been in the headlines for much of his racing

“[Paraguayans watch] actually a lot, a lot more than I’d expected. The people are very friendly, they support me a lot. Even if I don’t look like a Paraguayan,” Duerksen says. 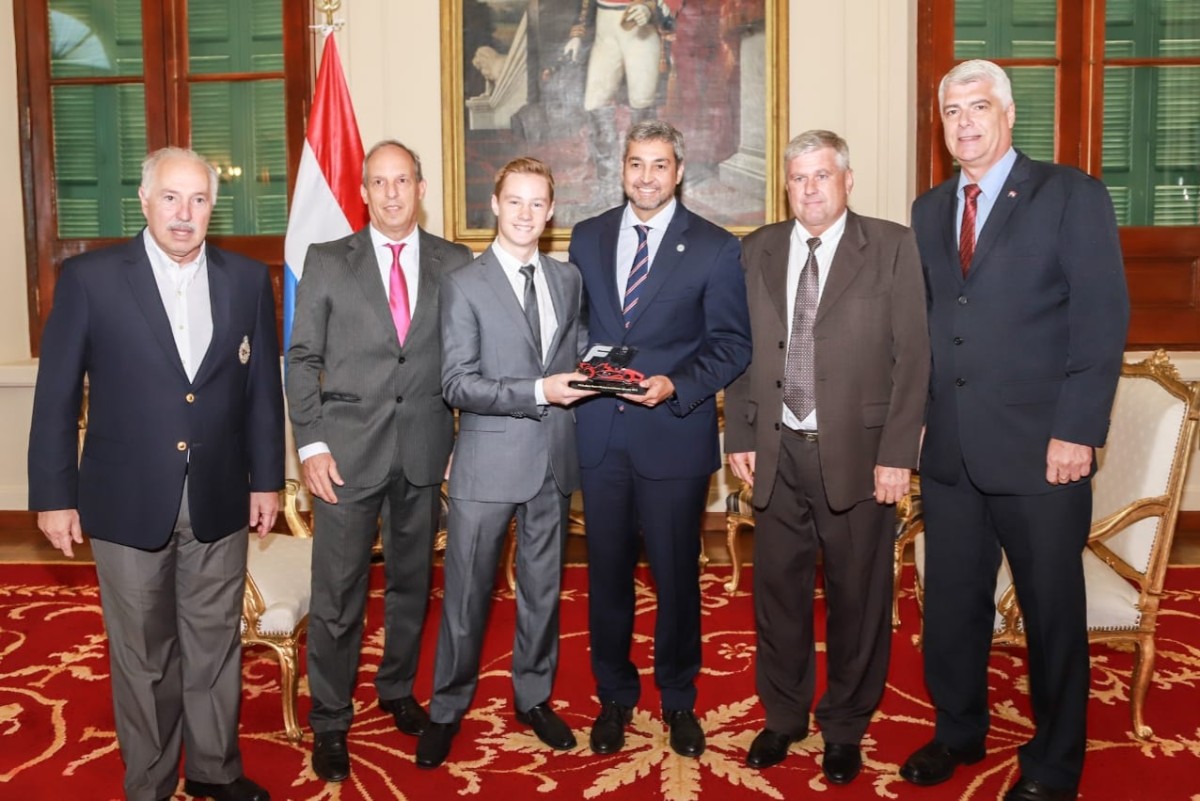 “Some guys, they say ‘this is not a Paraguayan guy, he is a German guy’. But the 95%, they support me. I appreciate that a lot, because it’s very valuable and the government – we tried to get some support from them, but nothing came out yet. But in general, the people, they are just the best.”

Governments financing athletes forging a career abroad isn’t rare in South America for the more niche sporting disciplines like racing, but there is competition for that political, or even personal, support.

“I met the Paraguayan president. It was very special,” reveals Duerksen.

“He was very happy with my results, and stuff like that. He said he would support me, but there were some problems, now also with the COVID-19 stuff. They had to focus more on the health, so they sadly couldn’t support me this year, nor last year.

“But anyway there are many, many people working hard to get some support from the government or from other sponsors. There’s a really big team and I’m just thankful for everything they’ve done.”

Duerksen’s career so far has been a feel-good story for Paraguay, and he’s still only 16 years old, but has the work to build the country’s motorsport profile beyond its rising star had as much success?

“Sadly not, sadly not. The situation there in Paraguay is not so well, especially with the economic part. For motorsport, it’s quite difficult. They haven’t even started the national karting championship yet, because of COVID-19.

“I think rally, they have started already the championship. Sadly there’s no growth yet, but I hope that in the future the karting can grow, and also motorsport in general. 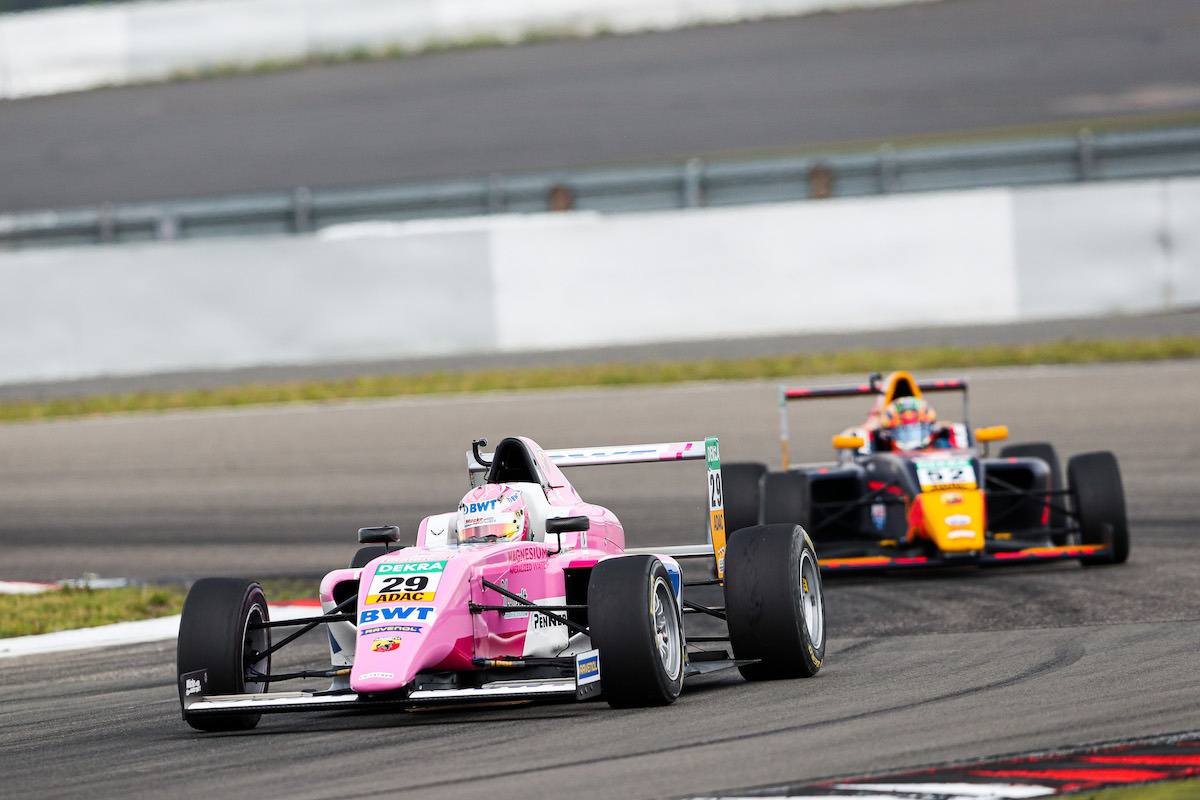 “In Paraguay, they love a lot F1. There’s a lot of people watching it. But the principal thing is rally there, because there are many drivers there. But in general the country loves F1, and when I read all the messages from my fans, it’s like: ‘I hope you can go to F1 as the first Paraguayan guy, I wish you the best’, so the support is there. And the dream from all the Paraguayans to have a F1 driver there is also there, so that motivates me to keep on going.”

And the going has been tough at times for Duerksen. While he started his single-seater career in F4 UAE with five wins, two poles and a strong second place in the points behind only 2020 FIA F3 Championship driver Matteo Nannini, and was a winner in just his second round in Europe, he ultimately had a messy 2019 on-track and ended up a distant eighth in the Italian series and an even lower 11th in the ADAC-branded German championship.

“Last year was really up-and-down. I learned a lot, really a lot. Last year in the middle of the year, that was where I most learned, which were the worst weekends I had.”

He had a seven-race spell in ADAC where his best finish was a singular 10th place, and a five-race run in Italy where he could manage no better than a pointless 12th.

“I applied that [learning] for this year and it’s working really well. As I driver, I’ve grown up a lot. Mentally, I’m a lot stronger than last year. Physically, also a lot more; I’m preparing a lot more than last year.

“I wouldn’t say it was a bad season last year, also with the bad results, but I don’t look at that. I look at my progress as a driver, and it was really big, and this year I’m starting really, really well and now with my first victory in the Italian championship. I feel really comfortable with the team, we understand each other really well.”

Duerksen has spent the entirety of his time in F4 with Mucke Motorsport, and his aim this year is to win the ADAC F4 title, along with contesting some select Italian rounds “to be on the rhythm”. 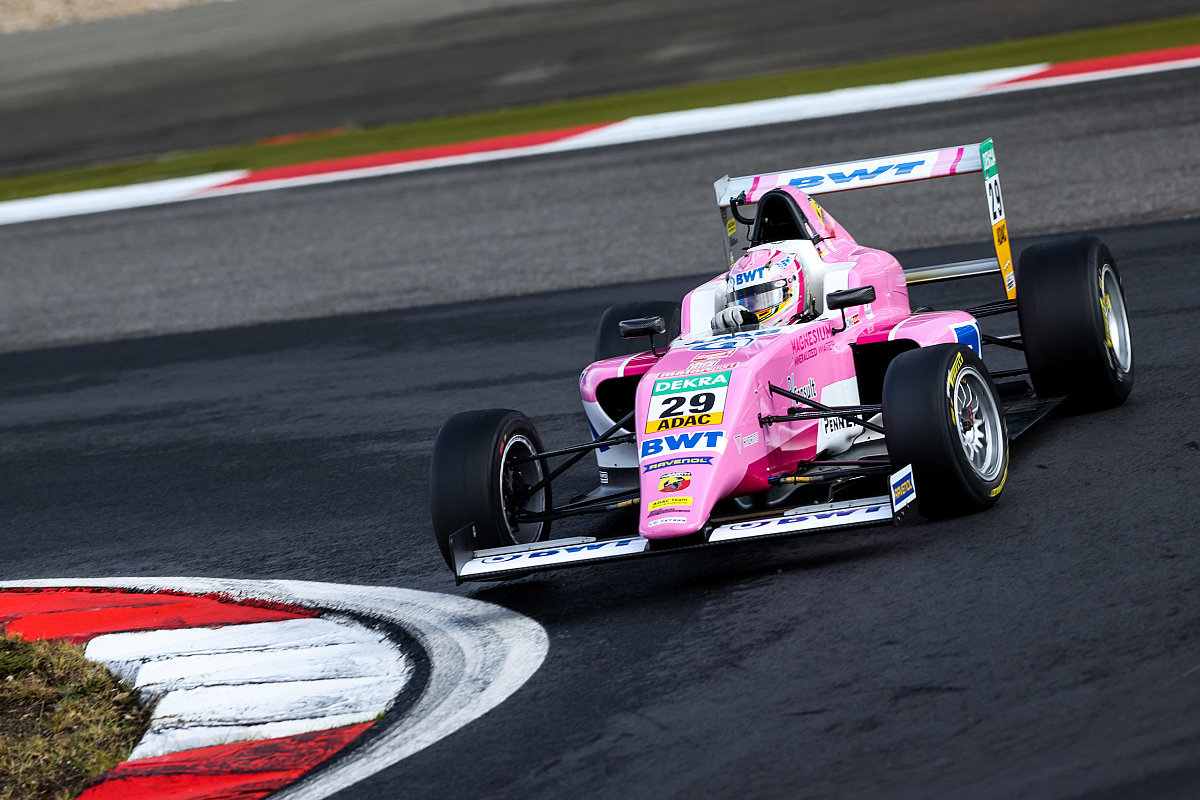 “I’m still working hard for the ADAC title. The gap now is a bit big to first place, but I think I still can recover that.”

Wins at Hockenheim and Nurburgring, but combined with three non-scores, leaves Duerksen currently fifth in the ADAC standings and 74 points behind leader Jonny Edgar with 225 left available to score. He is the only other driver besides Van Amersfoort Racing’s Edgar to win multiple times, but Mucke has not always rivalled VAR and US Racing on pace and Duerksen is currently its only frontrunning driver.

In Italy he skipped the first two rounds but took a win, pole and fastest lap on his return at the Red Bull Ring, where Formula Scout caught up with the teenager. Second place and fastest lap in race three there, after an incident left him in 15th in race two, already puts him eighth in the points. His scoring rate surpasses all but Prema’s points leader Gabriele Mini and Edgar, and if he were to contest the three remaining rounds that don’t clash with ADAC he could feasibly rise up to sixth in the standings.

“I think this is probably my last year in F4,” admits Duerksen.

“[Next year] the idea is to be in F3 – which championship, we don’t know yet. If it’s Euroformula, Formula Regional European Championship, Formula Renault Eurocup or FIA F3 – that we will see in the future.”

Taking that next step up may not only launch Duerksen’s career to the next step, but could be the catalyst needed to turn Paraguay into a racing nation.

More from ADAC/Italian F4
Scout Report: Ollie Bearman
The new stars who stood out on a big F4 weekend
Who to Watch: 2020 Formula 4