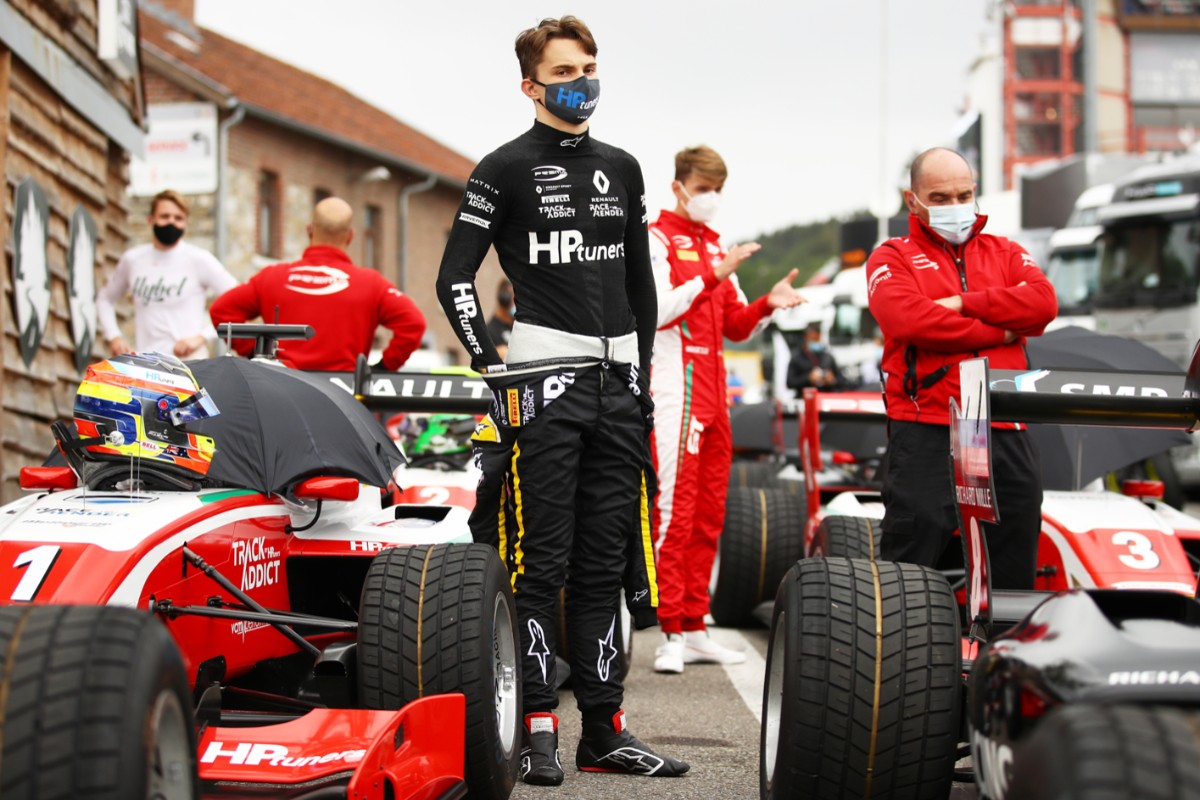 There’s a strong track record of Formula Renault Eurocup champions making it to Formula 1, but following up that success immediately hasn’t been easy for everyone. Oscar Piastri did it though, and here’s how

The strength in the FIA Formula 3 Championship’s field comes not just in quality but in quantity. In a grid that usually consisted of 30 cars, six drivers went into the Mugello season finale in title contention, and three made it to the title-deciding race able to become champion: Piastri, his good friend and Prema team-mate Logan Sargeant, and ADAC Formula 4 champion Theo Pourchaire with a much-rejuvenated ART Grand Prix – once a powerhouse at this level like Prema is now.

Piastri (starting 11th) and Sargeant were level on points entering the final race, the 18th to take place in a condensed 11 week period – with Piastri in the title-leading position on second place countback. Pourchaire was nine behind, but had been potent at the Italian circuit in the Saturday race that set up the title decider.

“Logan starting fifth certainly presented a very big challenge,” Piastri explained in a special press conference for the newly-crowned champion. “But I just had to keep telling myself that anything can happen, and anything did happen today.”

And it happened almost immediately. Sargeant was out on the opening lap after being pincered by two other cars, leaving the title as a duel between Piastri and Pourchaire. Hitech GP’s Liam Lawson, Trident’s David Beckmann and Prema’s Frederik Vesti had dropped out of contention in race one, even though Vesti took the win.

“During the season, I think if you asked Logan and I, we would both probably say that we focused a lot on each other. I think Fred was quite unlucky in certain parts of the year but proved that he was more than quick enough at the end.

“David was sort of just always there, just getting the points, and then Liam obviously had a few bad races as well and was getting wins. Theo, we definitely considered him a threat coming into this weekend, and as it proved he very, very nearly won. I think the other three, realistically, they were probably a bit far back to really mount any challenges. 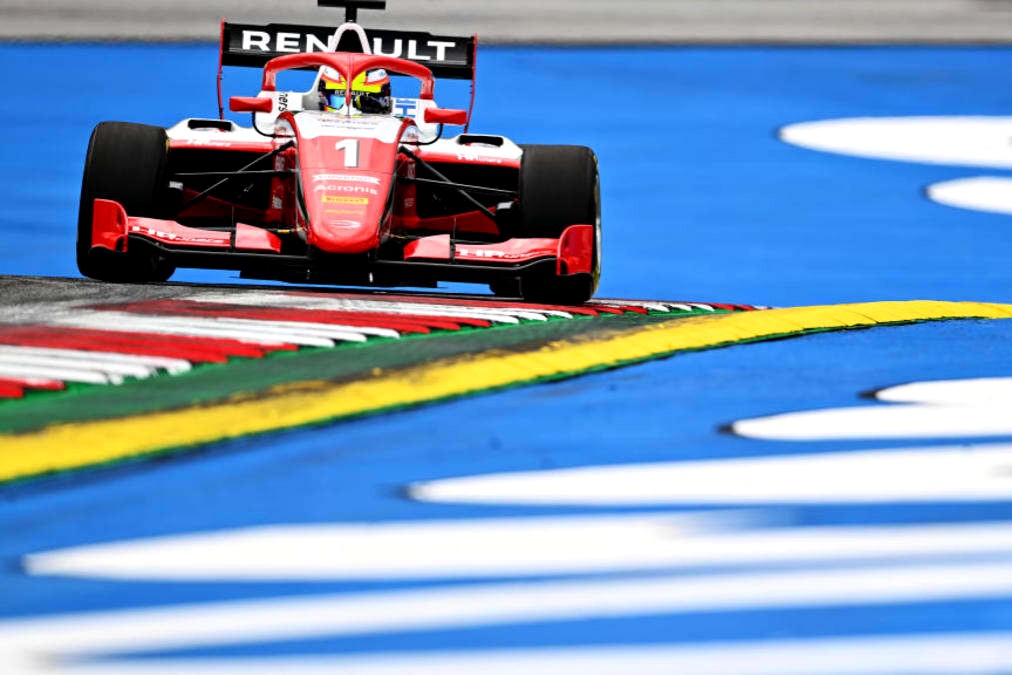 Piastri’s strength cannot be put down to any one particular factor. He was not the fastest in qualifying – he didn’t even take a front-row start while Sargeant took three poles. He didn’t secure the most victories – that honour went jointly to Vesti (who won three Saturday races) and Lawson. He arguably lacked the reversed-grid excellence that Beckmann regularly produced, and didn’t always go for the high-risk overtaking that Pourchaire delivered at times.

However, Piastri was almost always there. Not thereabouts, but there. That is despite a more than fair share of reliability issues that hampered him throughout his campaign, not least his well-documented frosty relationship with the Drag Reduction System. Being at the front, Prema or no Prema, is far from easy in a championship at FIA F3’s level, and Piastri was usually in the points – only being beaten on frequency by Beckmann – and his podium tally was only surpassed by Pourchaire.

“It [DRS issues] was certainly a challenge to overcome. It was annoying, to say the least. I was presenting the funny side of it but obviously it’s nice when your car works. I was glad for the last half of the year that we got those fixed, but it was tough.

“I think winning the championship puts my mind at ease because I don’t have to go ‘what if the DRS hadn’t worked’ and ‘what if a million other things had have happened’ [had I lost] so it was definitely challenging and put my mental strength to the test, as did a few other things. But in the end, you can still do a race without DRS and get a good result. It wasn’t the end of the world, I just had to stay strong and not be phased by it.”

Piastri’s best results in qualifying and races surprisingly came when those issues were most prevalent, and after qualifying a season-best third at Silverstone he spoke about talk of consistency being his speciality (‘the Piastri touch’), and how he would rather be the one setting the pace.

“I’d like to have raw pace as the ‘Piastri touch’ to be honest, but being consistent has paid off so far, obviously maximising qualifying and race one is still massively important with more points on offer [than race two], but my Eurocup campaign last year was pretty similar in terms of consistency. 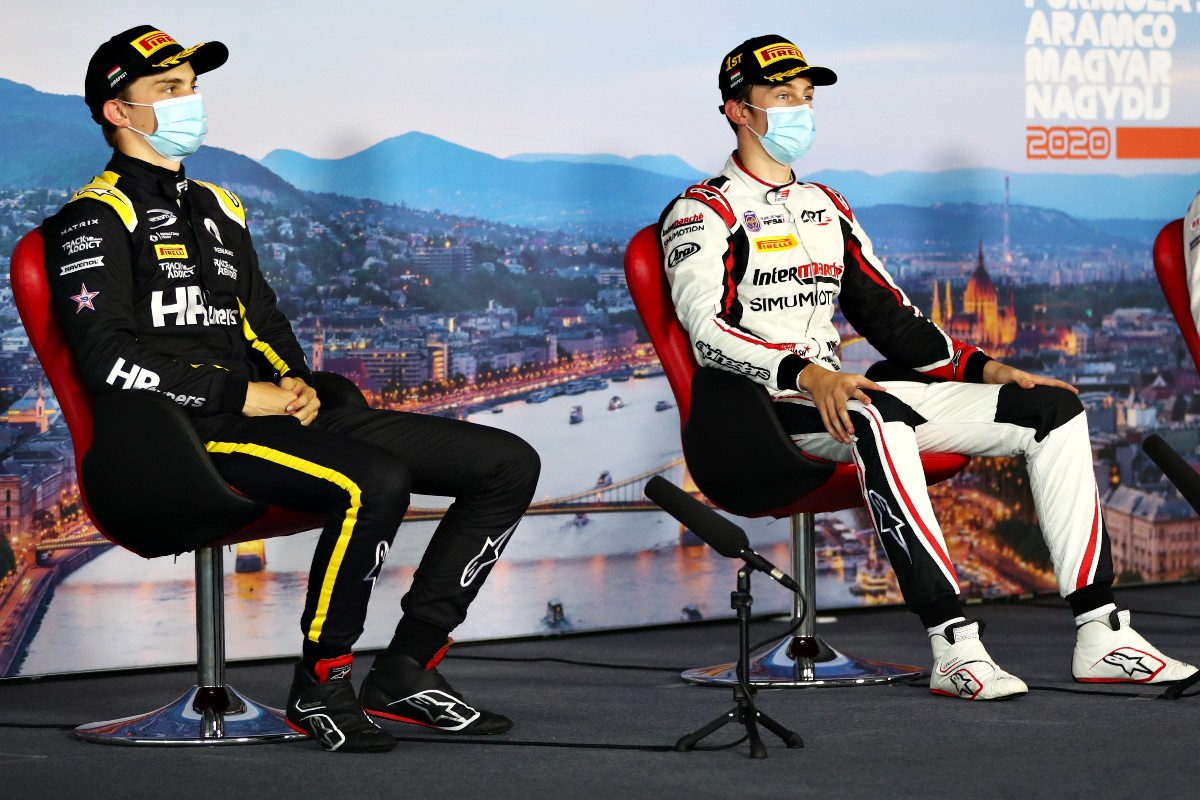 “I’m going to try to keep going but I’m not satisfied with qualifying third, I definitely want to be pushing for pole and getting race wins as well so hopefully I can be consistent and quick.”

He revisited the topic immediately after becoming champion.

“My consistency and keeping my head cool has been the biggest thing. Obviously the beginning of this weekend wasn’t ideal [he received a grid penalty for race one] and then to finish one spot off the reversed grid pole yesterday was pretty frustrating, but it doesn’t really matter now, does it?”

That consistency is reflected in the “calculated” recovery drive to third place from a penalised 15th on the grid in the first race at Monza, in what was junior single-seater racing at its absolute finest.

“[A risky move on Alexander Smolyar aside] I think all the other moves were very calculated,” he said. “There was a bit of contact in there, but I don’t think any of it was my fault. Yeah, I think it was a pretty calculated drive, and I don’t think I took really any unnecessary risks, there was just some contact from the others not really wanting to give up their position easily.”

Piastri’s Monza performance meant he reclaimed the points lead from Sargeant, who finished down in 26th after contact led to a spin. However the title implications of their varying fates was not on the Australian’s mind at the time.

“We’ve seen various times throughout the season how it can completely all change. I’m not really focusing on where Logan is and what he’s doing, I’m going to be trying to make up as many spots as I can and seeing where the points are afterwards.

“But I think it’s still very close. It’s still single digits in terms of the gap and finishing first or third is 10 points difference so I think there is still a long way to go and I’m expecting it to go down to the last race.” 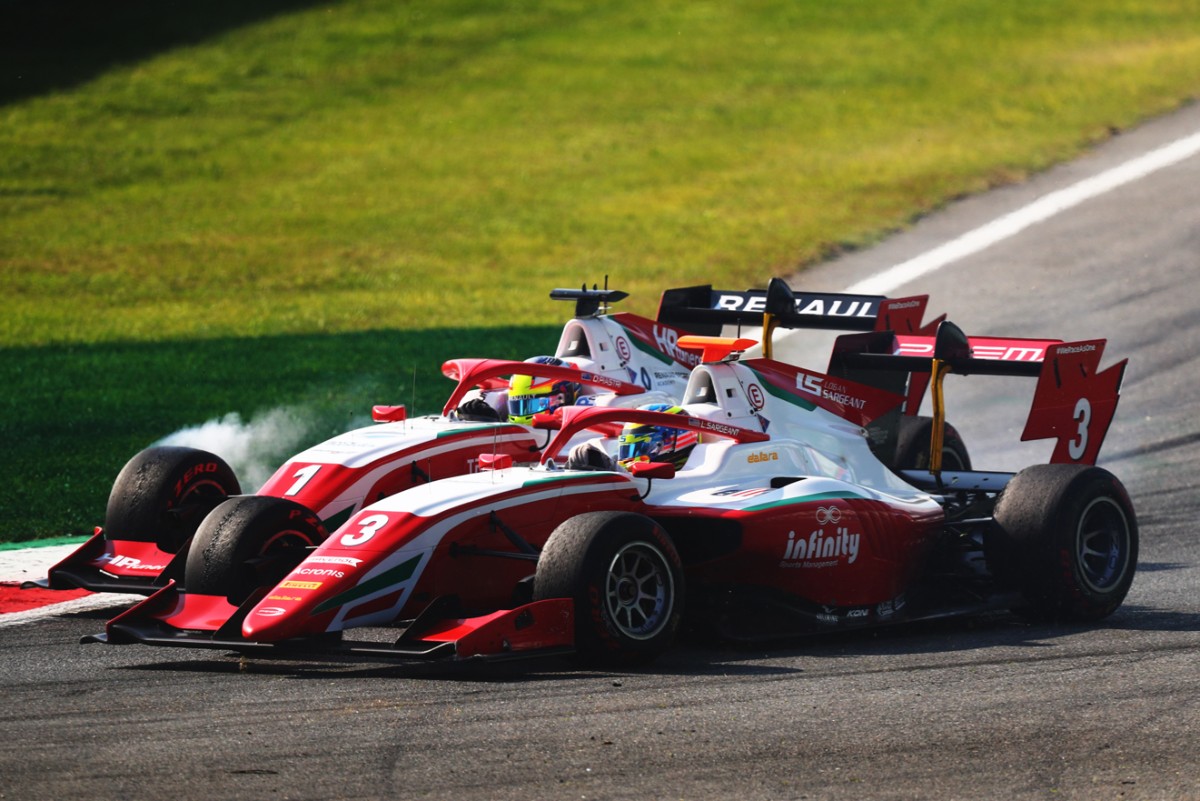 Piastri’s expectation was bang on target, and that level of smartness is one of the keys to his title win. His approach changed as the season progressed and the title battle began to morph into what it was, and gradually minimising the risks taken is what put Piastri in a position to pounce in the decider. That was one area where Sargeant and Pourchaire slipped up. They had the speed to be champion, but took a couple of risks too many, and that handed Piastri the advantage.

“At the beginning of the year, [I was] definitely [approaching it] race-to-race,” he said on reflection after winning the title.

“I think really until you get to the last couple of rounds of the championship there’s no point worrying about it, because as we saw very well this year a lot of things can change. There were probably a few races where I should have taken more risk than what I did, but obviously it’s a lot easier to say in hindsight.

“Monza I really had to overcome what happened in qualifying to get my championship back on track because otherwise it was looking pretty tough coming into this weekend.

“The moments where I was behind in the championship I really had to push and take the risks, and when I was in front I probably didn’t take as many risks. But that’s pretty normal and this weekend after qualifying I definitely had to take every risk I needed to. It changed a bit, but generally I just tried to maximise the result that I could in each race.”

What Piastri lacked across the season, he made up for by being savvy and smart. He has proven plenty of times in 2020 and prior that he has outright speed, but it wasn’t necessarily always on show. Some of the overtakes he had to make to claw back at Sargeant’s championship lead were sublime, and proved absolutely pivotal in the bigger picture.

A move to Formula 2 is likely Piastri’s next step. It is hardly a coincidence that consistency – as displayed by Prema’s Mick Schumacher – is proving to be the way forward in that championship in 2020 as well. Should he end up at the level one step away from Formula 1, the Renault junior will be a rapid, smart, consistent asset to whichever team he is with. 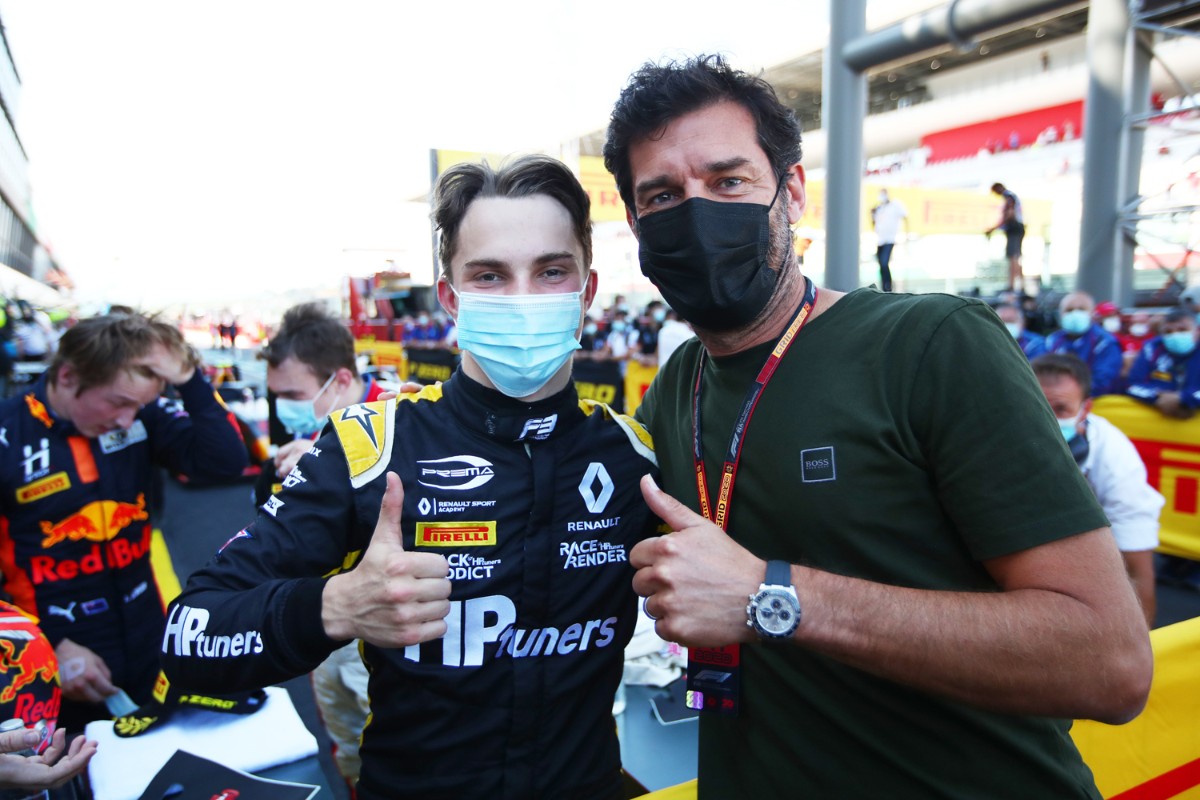