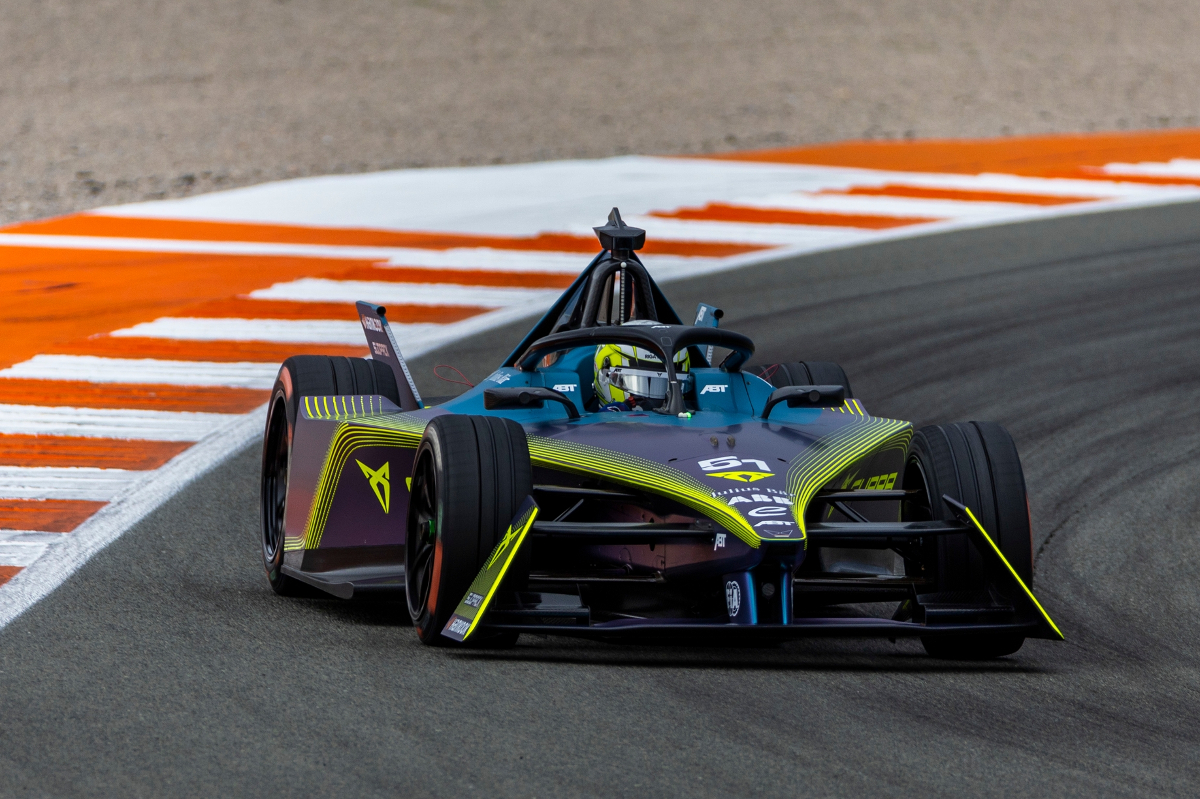 Nico Muller was with underdog teams through much of his single-seater career, but has shown his value to bigger operations in the DTM since. Now he’s got a second chance in FE with a title-winning team

The commencement of Formula E’s Gen3 era this weekend marks a fresh start for everyone in the championship, with a radically different car, new regulations and several new races on the calendar too.

With such change, there are several drivers who have earned second chances to race in FE. And one of those is Nico Muller.

The 30-year-old Swiss was a Dragon Racing driver for one-and-a-half seasons in FE before realising he had too many date clashes with his parallel DTM campaign and split with the underperforming team midway through the 2020-21 campaign.

In 18 races with the backmarker team he scored three times, one of those being the infamous Valencia E-Prix where most of the drivers reached the limit for usable energy before the race’s conclusion and Muller finished second.

During his rookie season, Muller had been considered by Audi Sport Abt to replace the sacked Daniel Abt, but his contract with Dragon removed him from contention for that drive.

Muller was desired because the team already knew how he good as he was, having run him in the DTM for four seasons already. His team-mate there was Robin Frijns, another driver Abt considered for FE, and the pair were close friends.

In fact the Frijns/Muller combination had already delivered 12 DTM wins and a lot of useful test miles in FE powertrain development for Audi Sport Abt, contributions which were not forgotten when the team returned to FE for this year with Mahindra power after a year on the sidelines following the exit of Audi from FE. The team now has both on its books in FE.

“There was some other options on the table, and you look at a few and in the end considering all factors, the decision for me was not let’s say very straightforward, but also not very difficult,” Muller tells Formula Scout. 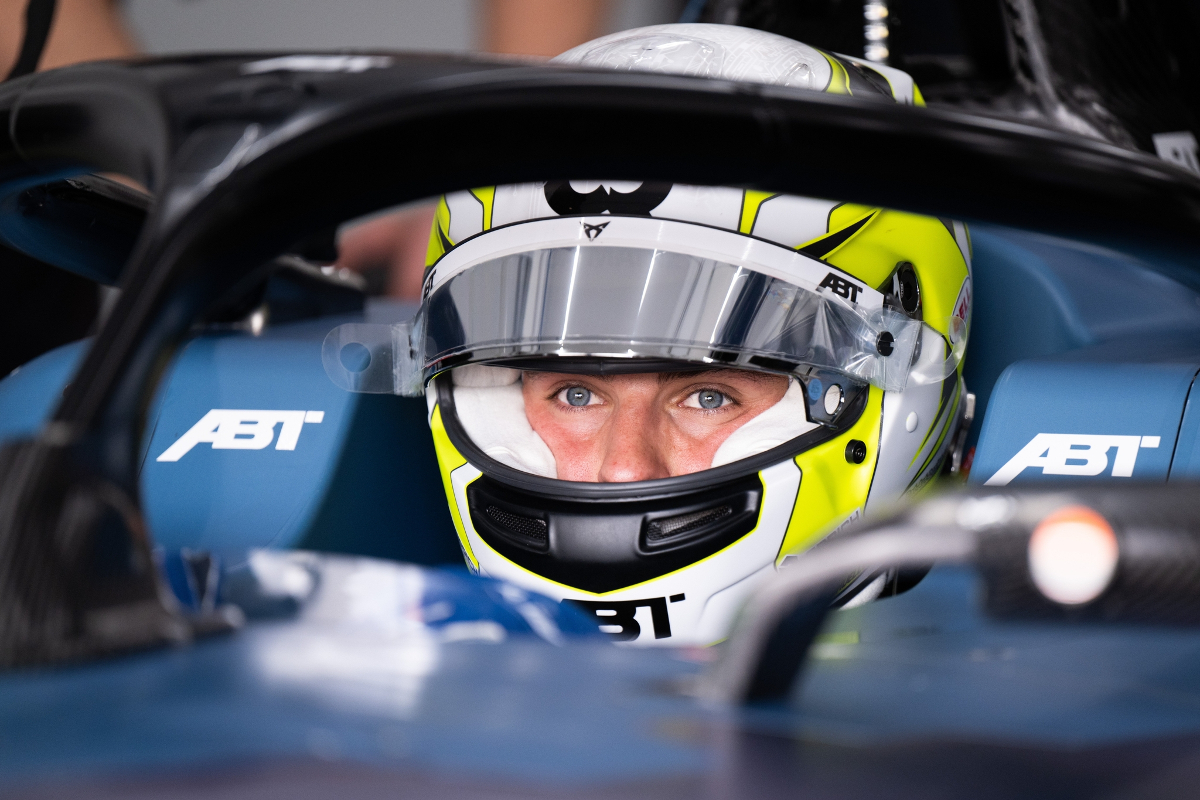 “I know these guys very well, we’ve worked together successfully in this championship, and I know what they can do. In the end, in FE the cards will be reshuffled anyway for Gen3, so I think the most important thing is to have a team around you that you have full trust. And there I had zero doubts with Abt, so that’s why the decision wasn’t that difficult.”

Being team-mates with Frijns also attracted Muller to the seat, with Frijns having been a guest at his wedding shortly before his FE seat was announced.

“It’s going to be fun off-track for sure. On-track I hope it will also be fun. But we have to still make sure and work hard for it, because as a small team against those manufacturers it won’t be easy, that’s for sure. Keep it fun, but also successful, that is the goal.

“I think we have a very healthy working relationship: we are competitive and we want to beat the other one, but we still try to push the team forwards and we play open books, so that’s I think going to be an important factor going into the first season of Gen3 especially.”

Muller added he still has a point to prove in FE after his first stint in the series was cut short.

“That’s one of the big reasons why I want to go back. I’ve had the chance to test for Audi a couple of times, and I think I’ve shown there that the pace is clearly there. And then one-and-a-half seasons with lots of ups and downs with Dragon. I mean it was valuable experience, and even in tough times you grow probably more than in other events. It was pretty good. Good to have the chance now to prove that we can actually do it.”

Although Abt is now a customer team in FE, it was previously one of the series’ title-fighting manufacturer operations with Audio and in the DTM it is also considered one of the series’ heavyweights. However where Muller first proved himself as a driver was with underdog teams, making it to the level below F1 before switching to the DTM. 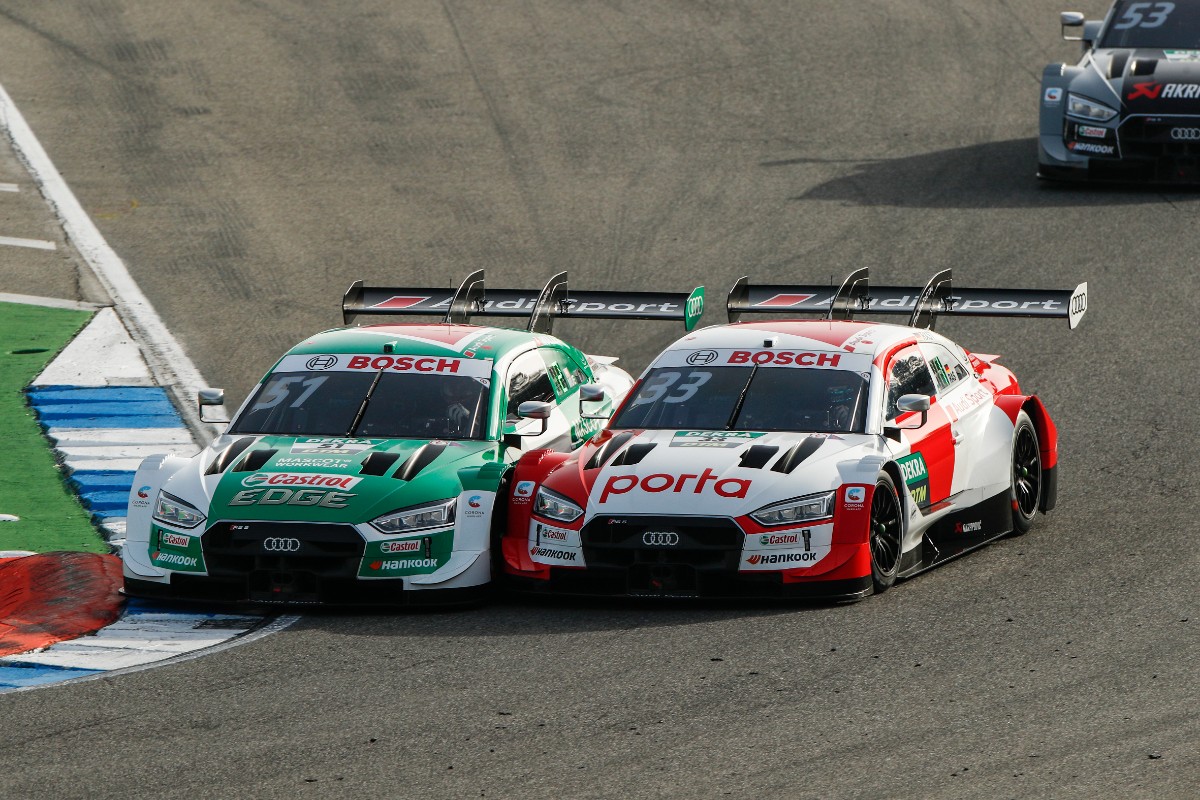 “It’s a good feeling [having the resources to compete at the front in a top team],” Muller explained. “You know that you can 100% rely on the team and them doing their job perfectly. So you can even more focus on what you have to do and to deliver. Only positives.”

But it’s driving for and winning with smaller teams such as Jenzer Motorsport in GP3 and Draco Racing in Formula Renault 3.5 that “I think made me the driver I am today”.

“Sometimes in times where you maybe have to put even more effort than others to achieve similar results, that’s what makes you better, and I’m very happy with how things went and very grateful for the opportunities I got. It’s perfect the way it is.”

Muller spent four years with Swiss team Jenzer, starting with two seasons in FR2.0 where he came 11th in the Eurocup, and then contesting the first two seasons of GP3. In his rookie campaign he won a reversed-grid race on his sixth start and later claimed a pole position and a feature race win to come third in the standings.

The second season was less successful, scoring considerably fewer points and coming fourth in the standings with one feature race win at Silverstone. Following that he joined Draco Racing, a team that had gone 21 races without finishing in the top five, to step up to FR3.5 for 2012.

Muller got one podium and came ninth in the points, while fellow rookie Frijns won the title with Fortec Motorsports. Staying in the series for a second year was more rewarding, winning from pole in Monaco and also winning at the Hungaroring en route to fifth in the standings, and Muller was then headed to the DTM with Audi’s Team Rosberg.

“I’ve had some early links to Audi, and they always did their young driver tests. I got invited to do one of those, and I managed to perform well there. And then that kind of gets you into the loop,” he recalls of his move to the series. 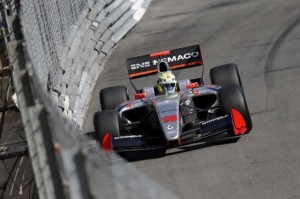 “Once there was a seat available, I kind of was their next choice. They were the ones giving me the first real opportunity in the world of professional motorsport, and still here with them so it’s I guess a good sign.”

Muller spent two DTM campaigns with Rosberg (and won the Nurburgring 24 Hours for Audi with W Racing Team) before his five-year spell with Abt, and then returned to Rosberg in 2021 as the series switched from touring cars to GT3 machines.

“Honestly I think they’ve done a very good job overall [changing it to GTs],” Muller says. “I think the quality of the 2022 field is proving that, the size of the field, the variety in the field.

“I think they’ve really managed to turn things around within even less than a year. It was a challenge to kind of regroup this whole championship after the change of technical regulations. I think the racing is exciting, sometimes it was slightly over the top, but overall I think the product is great and I’m happy to be a part of it.”

As Audi is not in FE anymore it means he can’t represent the brand there (and has actually terminated his Audi contract to reunite with his old team), although Abt has partnered with fellow Volkswagen Group company Cupra for 2023. And perhaps more excitingly, Audi has announced it will enter F1 in 2026.

“Exciting times at Audi for sure with them going to F1. Maybe not really directly for me that it is very interesting, because at the stage I am at in my career, 2026 is quite far along the way. It’s going to be exciting to see how that develops.”

Both Frijns and Muller are talents who arguably should have reached F1, based on how they maximised opportunities as much as their results, and Abt’s team principal Thomas Biermaier has no doubts about the ability of the pair.

“We were already in negotiations [with them] before we did the announcement [we would return to F3], and we are always in close contact with them. So we had in the early part of 2022, already some discussions,” Biermaier tells Formula Scout. 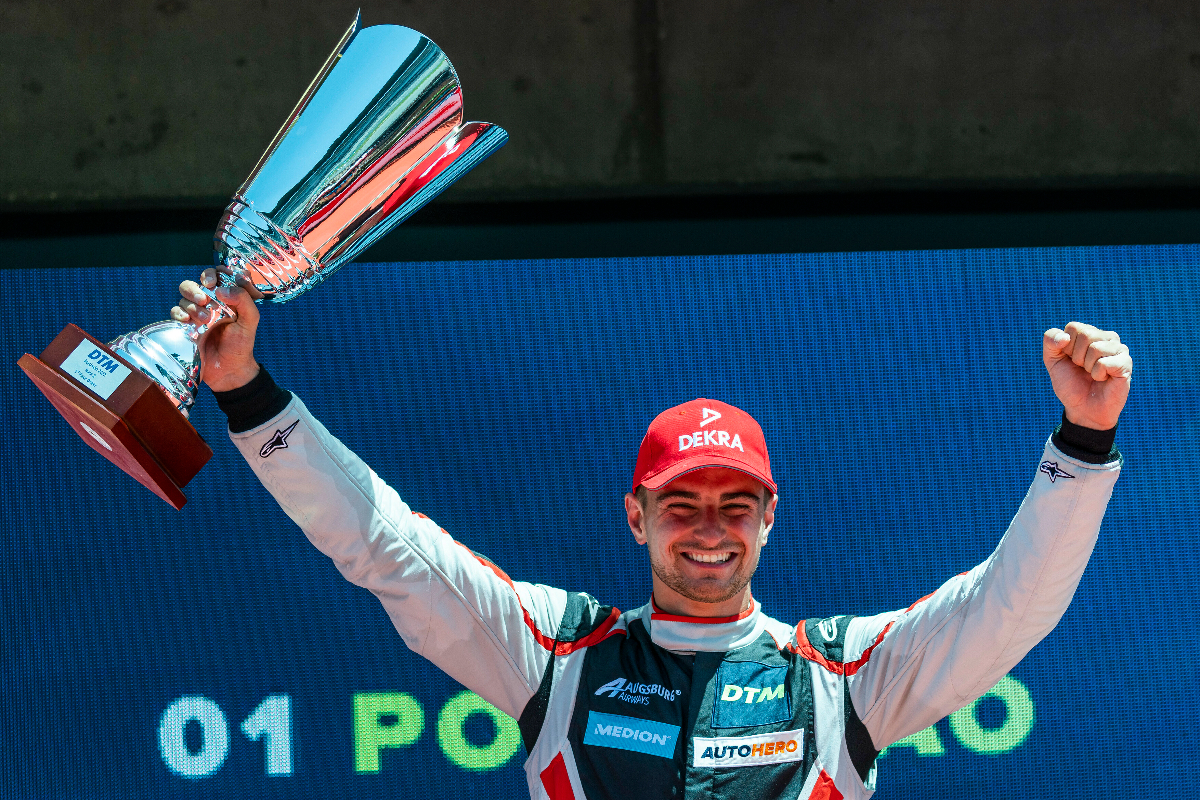 “Right now, they are really professional, but they also know that we are kind of family. That they can feel quite confident, this is also good for drivers, if they are relaxed in the head. And I think this was the reason why they came back to us.”

Due to Abt’s customer team status, it meant its two drivers had to wait longer than others on the grid to drive FE’s Gen3 car for the first time, but Biermaier says the team is working “like we were a manufacturer team” as “we are supporting Mahindra where we can, and currently we are working very close together with them”. He summed the relationship up with Abt’s powertrain provider as: “It’s a four-car team, and we want to have the best for the Mahindra car.”

Despite having a German team in FE, and potentially up to three German automotive manufacturers in F1 by 2026, the domestic scene is in an increasingly weaker position when it comes to being a route for drivers to go from karting to the top. The most recent hit has been the cancellation of the ADAC Formula 4 championship, and the DTM previously lost European Formula 3 and then W Series from its support bill.

“If I look backwards 15 years ago when we had F3 with the DTM as a support series, then Rosberg, Hamilton and di Grassi was driving there,” Biermaier reflects.

“So many, many drivers went through this road. Now from GT to F1 I think it’s very, very difficult.And motorsport in Germany is not the easiest thing currently, from the support and from everything, so it’s difficult. If young drivers are not being in a manufacturer programme, for them it’s quite difficult to get a seat in F1.

“We always [get approached by interested young drivers]. It’s important to give the young generation a chance. This is what how we do it now with Riccardo Feller in the DTM. He’s 22 years old, so we have some young drivers in our line-up. And young drivers are always welcome, we always try to give them a chance.”

Were it not for being “fully focused on the FE comeback and DTM”, Abt would be interested in contesting the DTM Trophy that currently supports the DTM and other young driver-focused series. 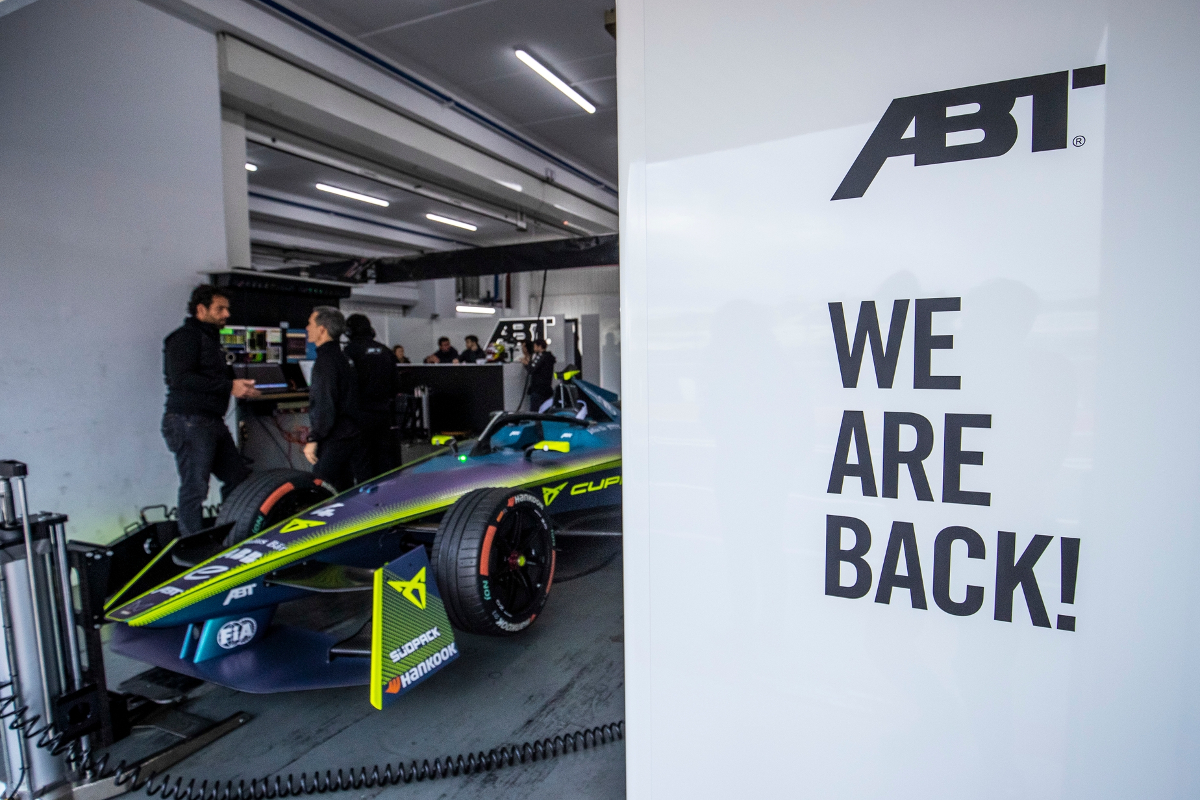 Such an expansion could have a big effect, as the pipelines between those two series is currently rather ineffective and even the DTM’s position as a platform for young drivers to then move on to greater things from has been weakened in recent years.

Abt and Muller reuniting in FE shows that performing in the DTM can still earn you a professional seat in single-seaters, and that some drivers don’t truly get to show their abilities until they reach motorsport’s top level.