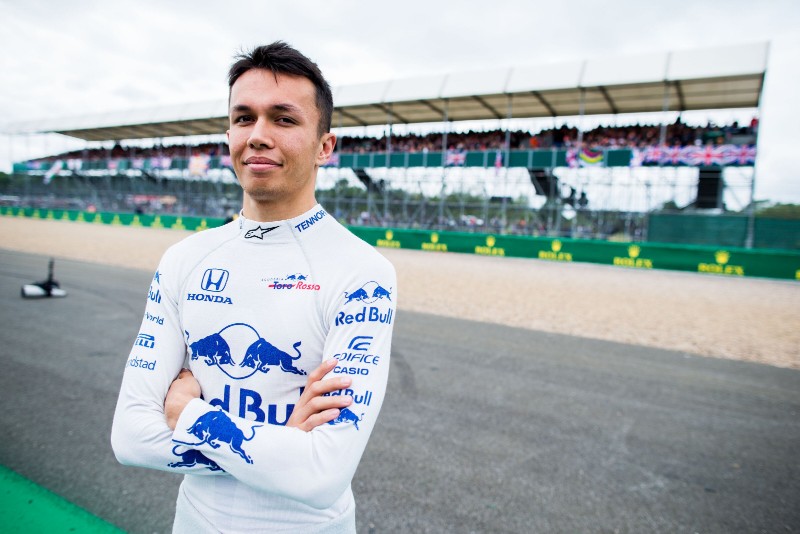 This time last year, there was scant possibility that Alex Albon would be heading towards a future in Formula 1, let alone sitting in a grand prix-winning car 13 races into the 2019 season in place of Red Bull Racing’s underperforming Pierre Gasly.

The London-born Thai was yet to even sign a contract with Nissan e.dams to race in Formula E for the 2018-19 season: A contract that would last just two months, with a release being agreed after Red Bull approached Albon to fill one of its 2019 Toro Rosso seats. Here’s the behind-the-scenes tale of how it happened.

After three middling seasons in the Formula Renault Eurocup, a supposed reinvigoration of his career in FIA European Formula 3 in 2015 with Signature actually ended up being his last year of racing in F1 team colours since karts.

Gwen Lagrue, who managed the Lotus F1 Junior Team when Albon was a member, retained the teenager as one of his own and helped facilitate the move into GP3 for 2016. With ART Grand Prix, Albon was finally able to deliver on his talent and finished second to Charles Leclerc in the standings.

Running with the championship’s top team was a rewarding decision, and Albon stuck with the squad in Formula 2 the next year. This time the financial risk didn’t provide the same reward, and his season was defined by a collarbone-breaking cycling injury that left him on the sidelines for two races.

He ended the year by testing with rival squad DAMS, and immediately impressed with his determination and speed.

Negotiations between Albon and DAMS over a seat for the upcoming season kicked off 2018, but work through January and February to find sponsors to prop up a F2-sized budget again after his year at ART proved unsuccessful.

DAMS had other drivers pursuing its second seat, but it remained patient with the underfunded Albon and kept the Thai – in his McLaren Autosport BRDC Award finalist’s racesuit from 2014 – in the car for pre-season testing in March.

At the time, Nicholas Latifi had been struck by a quelling illness and was unable to take his seat for the tests, and running Albon was a calculated risk. There was no guarantee he would gather the budget to race, and there was a small chance that Latifi may not have recovered in time for the season opener, meaning a sensible approach would have been to evaluate other potential signings during the limited pre-season running.

The introduction of a new car, the Dallara F2 2018, meant consistent feedback was even more important though and Albon was proving his worth already. His 2017 form could also be put behind him in the eyes of himself and the paddock, as the new car was a fresh start for everyone and he was determined to show what his true ability in F2 was.

Testing took place in early March, exactly one month before the Bahrain season opener, but Albon’s pursuit of budget for the full season was still proving fruitless on the run-in to Bahrain.

DAMS’ late founder Jean-Paul Driot and its F2 team principal Francois Sicard had committed to having Albon in their car, believing from the off he could fight ART’s George Russell and Carlin’s Lando Norris for the title, and they facilitated a one-round deal at late notice – just two days before the cars were on track for free practice and qualifying in Bahrain.

In a car devoid of sponsors bar Hitech GP partner Bullfrog, Albon qualified less than a tenth of a second from pole and finished the first race of the season in fourth.

DAMS and Albon went straight back to the negotiating table and penned another one-round deal for Baku – a track he missed in 2017 – where he took feature race pole and victory, and was denied the chance to score sprint race points by a stall.

More sponsors had appeared on Albon’s car by round three at Barcelona, by which point his future in the championship with DAMS was secured for the rest of the season. He took pole again, and picked up his first sprint race podium in second.

What set Albon apart from many of his rivals was a lack of working F1 connections, as explained by Dan Chapman of sports agency Full Contact, who was another to be impressed by Albon’s approach and started working with him during 2018.

“As Alex was not part of a junior F1 team and was not heavily sponsored, it follows that he did not have access to the same levels of support and resource that other F2 drivers would have,” Chapman tells Formula Scout.

“He did, though, have an excellent team in DAMS and a very supportive family and Alex has this calm, steely focus which allows him to thrive in all environments.

“He struck me as someone who knew that he had various disappointments in the past, whether that be his early departure from the Red Bull Junior Team or his 2017 F2 season with ART, and in 2018 he found himself in a zone where he was in a good team and it was his last chance to shine to such an extent that he could get another opportunity to get to the top – and nothing was going to stop him from grabbing that opportunity.”

After losing out on a Monaco win from pole to a pitlane crash, Albon went on to win at Silverstone, Hungaroring and Sochi, and went into the Abu Dhabi season finale in contention to become the first GP2/F2 champion without F1 backing since 2014.

Russell ultimately won the title, and another unfortunate stall meant Norris pipped Albon to second in the points. They had both secured F1 seats, and Albon followed a day after the season ended when he was confirmed at Toro Rosso for 2019.

Earlier in the season, Albon credited his own ability to remain ‘on top of the pressure’ for his strong form; a contrast to the year before. This mental strength is what attracted Dr Helmut Marko, the same man who dropped Albon from Red Bull’s Junior Team after his first season in single-seaters.

He had been beaten to Albon’s signature by Driot, who approached the 22-year-old in the summer with the offer of joining DAMS in Formula E on a multi-year deal. In January, Albon had impressed in a FE rookie test with Renault e.dams, and it intended for him to be part of its Nissan-powered future in FE’s ‘Gen2’ era, starting with the 2018-19 season.

Albon was still focused on the F2 title, and finding a way back into a F1 team’s books, and his e.dams contract was announced the week before his Sochi win – just as speculation gathered pace that he was in serious contention at Toro Rosso.

“His calmness must be a key attribute to his success; it would not have been easy to focus on the F2 season amidst all of the speculation about his FE and F1 future – but he did just that,” Chapman adds.

“At no point did I ever notice him displaying any evident signs of anxiety – he focuses solely on what he can control and trusts and leaves others to do their jobs. It is a most impressive quality.”

For the first time in his career there was a secure future for Albon, and maintaining his calm and effective demeanour during the three months that Red Bull dangled the carrot of an F1 drive at him likely made it even more intent on signing him.

Turning his back on DAMS, and the leadership of Driot and Sicard that had handed two career lifelines, was no easy decision.

“For Alex, he seemed to approach the position with an extremely lucid mind,” explains Chapman, who could use his background in employment law to assist Albon through the complexity of the contracts he literally had on the table.

“That said, he fully respected and understood his contractual position, so it was down to others to see if his release from e-dams could be achieved. But if it could, Alex had not a moment’s hesitation about where he wanted to race. That the decision may have be seen as a financial risk by some is to miss that Alex’s boyhood dream – to race in F1 – was potentially on offer, and he knew that to be true to himself he had to explore that opportunity.

“Was it a brave decision? Undoubtedly, but would one expect any less from a racing driver who’s arguably as brave as you get?”

That bravery has been rewarded twice, with a promotion to Red Bull until the end of 2019, but he has no contract for next year.

When Albon signed for Toro Rosso he had yet to sample F1 machinery, but he very quickly looked at home in the team’s 2019 challenger during the Barcelona pre-season tests – despite his first run only lasting four corners before the car stopped.

He rebounded by setting 132 laps that day, the highest of any rookie, and went fourth fastest. Team-mate Daniil Kvyat took over the car and ended a 2043-day run of the team not topping a test day, but Albon responded by going even faster.

Lap times do not tell the full story, especially as Toro Rosso went slower during the Spanish Grand Prix weekend, but Albon made an important early impact while Gasly, promoted from the Italian team, crashed and cost Red Bull valuable time.

Albon was a points scorer by his second race, and had already established himself as an equal to Kvyat (now on his third Toro Rosso spell) by the time the feeder series got underway – i.e. when Red Bull could start evaluating its junior drivers for F1.

Several of those 2020 options are now redundant, not least because Albon has excelled to a point where no more is he a short-term solution for a driver shortage – a seat alongside Max Verstappen in a team targeting a title this year as proof of that.

The news of the promotion came in person, during a meeting with Dr Marko at Red Bull’s Austrian headquarters. Initially, Albon thought his summoning to the Styrian Alps was to discuss next year, but 30 minutes in to the meeting he was handed the best surprise of his life.

“There’s a big atmosphere here [at Red Bull], and you can’t ignore it. But at the same time, it’s a chance to prove myself and to be with such a race-winning team,” was Albon’s first impressions of his new drive.

“Just thinking about it now, it’s quite laughable that 12 months ago I was racing race-by-race in Formula 2. November I got the call to be in Toro Rosso and drive for them, and even that felt crazy to me. So coming to now and driving for Red Bull – it’s nuts,”