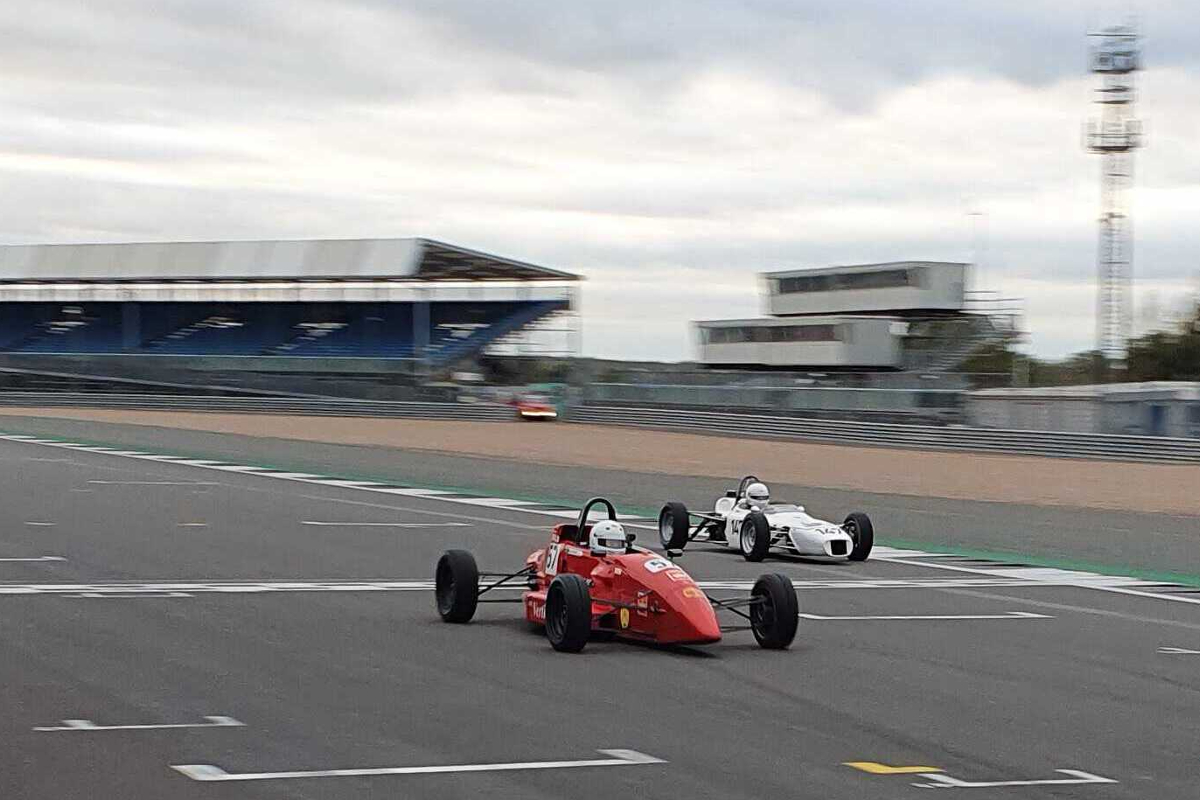 Formula Scout has gone through the Walter Hayes Trophy entry list to find out who’s likely to shine this weekend, and some of the stories behind the drivers and teams taking part at a chilly Silverstone

There is a Le Mans 24 Hours class winner, and winners frm British Touring Car Championship race-winners, Formula Regional and Formula 3 who are taking part in a event where older drivers and machinery can shine.

Unlike last weekend’s Festival, tyre use is unlimited and the big story going into Saturday is after a driver’s briefing that track limits at Copse is going to be imposed. Drivers were free to run wide in testing, and some made it their default line, so it’s anticipated it could impacy. the order from the three days of pre-event testing.

Here is a full rundown of every driver and car competing…

The defending winner says he was only gaining a tenth of a second with a tow in testing, far less than others were claiming, and his best lap was 1m01.5s. Under Formula Scout’s own pitwall stopwatch calculations, White was on average a little slower but consistently at that pace. Few with traffic were able to stay in the mid-1m01.5s for long.

However in qualifying he didn’t hook it together, so he will have to get his elbows out if he wants to win again.

Buckingham made his motorsport debut earlier this year in the Super Classic clases of the BRSCC Northern FF1600 championship at Anglesey, and he was winning straight away. Could he be a surprise among the pre-’90 runners?

The Firman is a car that is all about set-up if you want to get it in the winning window, and Wolfenden is one of those drivers who knows how to do it. Whether he has the ultimate pace to be fighting White this weekend is another matter, but he’s bound to score a strong result.

Despite driving an older car, don’t rule out Ward being up there with the rest of the KMR contingent in the races. The slipstream in races can be so powerful when there’s a queue of cars that he could be towed into higher positions and quite easily make the final. His testing pace from our calculations was pretty good without a tow too.

The smooth driving style of Moyers lends itself to this event very nicely, even in cold weather where you need to build heat into the tyres. This is because so many of the corners are loaded that the rubber gets worked hard anyway and it’s nailing the corner entries that’s all-important. Moyers is also one of the most hungry drivers when it comes to ending on a high with the WHT, and as that will be his final scheduled appearance in the FF1600 classic he will be going all out to win.

Gilkes used her oldest tyres in testing, but as soon as she put on a new set in qualifying the gap she had to her team-mates during the week immediately disappeared and she qualified on the front row for her heat. The Festival didn’t quite go to plan but the pace was there too, so the key to this weekend will be keeping it clean when wheel-to-wheel and letting her compact driving style – avoiding the kerbs more than most – do the rest of the work.

Like Megan, the Festival weekend ended with a clash. There was loads of positives though and that continued into WHT pre-event testing. KMR knows how to set the Spectrums up to be rapid at Silverstone so he’s dark horse to make the top 10 in the final if everything goes to plan before then.

Kevin Mills’s 16-year-old son was really the star of the Festival, and had he not been wiped out by an out-of-control Niall Murray in the final he would have been a victory contender. That crash meant there was some wheel alignment work to be done in WHT testing, with the corner weights offering a bad balance through the first day-and-a-half, but he’s got the car to his liking since and has been one of those avoiding the Copse exit kerbs. The result? Pole for his heat and a real chance of taking the overall victory this weekend.

Picking a Van Diemen LA10 to make his comeback in is a sound choice as it’s car that’s easy to come to grips with (and is of course what he won in six years ago) and has the pace to contend for top positions.

McArthur has been driving a Titan Mk4 usually this year, but he’s more than comfortable in modern machinery with B-M.

The unravelling of his Festival defence last weekend was a shame to see as he had the pace to win, and it’s been the same this weekend. He looked fast in testing, but used all of the road and more at Copse on many laps, and claimed pole for his heat with actual ease. In fact, Smith was so relaxed he went straight to sleep in his car after getting pole.

McArthur heads down south for another attack on the WHT and quite likely another run to the final if he avoids trouble. Given he has decent mileage behind him this year, matching his best result from 2015 wouldn’t be a bad target.

Simon Hadfield’s son has spent most of his racing career in historics, but two years ago he jumped into modern FF1600 machinery for the first time and has been getting ever faster in those cars since. He could reach the final on Sunday.

Middlehurst was very coy about his laptimes in testing, but he was happy with what he had done. Team Dolan doesn’t look like it’s the fastest this weekend, so he may need more individual magic than usual. He has of course won at this circuit in a Formula 1 car, so has a lot of experience to draw on to make sure his team is fighting for the win.

The rookie’s learning curve continues, and the Festival was one of his most impressive showings to date. Having a reduced line-up of three cars may make Cochran’s job a little harder in pulling knowledge from his team-mates, but the two he does have are absolutely rapid.

Formula Scout’s calculations put Cowley on par with White and Max Esterson in testing, and like Middlehurst he didn’t want to give away too many secrets from the pre-event running. He’s absolutely on it though, so expect him to breeze through to the final and then come alive when there’s a sniff at the overall win.

The Team USA scholar finished second in the Festival after Neil Maclennan’s disqualification, and in the dry looks incredibly fast. This week he’s actually been testing in GB3 cars as well as FF1600, but that doesn’t seem to have put him off and he’s one of the favourites to win based on testing pace.

The second of LDR’s Team USA scholars and completing its line-up as British GT champion Dennis Lind couldn’t find the budget to race this weekend. Castro has been quick to adapt in his FF1600 stint in the UK and undoubtedly he will be stronger here than he was at the Festival now he has more experience. He finished third there, so the only way is up…

Gough has always looked stronger at Silverstone than Brands Hatch, and while he was two or so tenths off the ultimate pace in testing he definitely has the time to dial the car in to be at the very front once racing gets underway. He’s also got brother Stuart’s WHT experience to pull from.

The rookie switched from KMR to Oldfield mid-season and has been constantly learning under the eye of 2018 Festival winner Josh Smith. In testing he’s looked his most potent yet, and will be in podium contention in his heat and probably semi-final too. Anything less than the final would probably be a dissapointment for a driver who is on the up.

There were a few set-up quandries in testing to get the Royale right for Silverstone, but Morris is as fast as ever and will be aiming for the Carl Hamer Trophy. Reaching the overall final would be great to see too.

Foster is always a victory contender here, but he skipped the final pre-event test session as he was happy with his set-up and then was only third fastest in qualifying for his heat. We know he can come from the very back of the grid to win here, but he can’t afford to be complacent if he wants a record fourth WHT win.

The former Formula Chrysler Euroseries racer is finally able to travel to the United Kingdom and race, having been wanting to throughout the pandemic. He’s a dark horse to reach the final and get himself amongst the big names of FF1600.

This could be Hannah’s last FF1600 appearance if a sponsor takes her to the next level of single-seaters in 2022, but GBR wants to hold on to her because she is growing into a consistently high-performing driver for the team. The Scottish team hasn’t always had the luck at the WHT, but often has the pace and Hannah will likely be in the lead group of all her races.

The ex-BTCC driver has got the hang of FF1600 and he’s getting faster with each session. The final is in his eyesight.

Gray stunned when he had to charge from the back of the grid in the Festival, so even if his single-lap pace isn’t enough to break into the final ease this weekend he should have the racecraft to do it anyway.

This is just the second weekend of motor racing for the Russian, who is targeting Formula 4 United Arab Emirates in 2022.

Cooper is normlly awfully unlucky at this track, but is also very, very fast. Quite luckily that will continue in 2021.

Fisher is still determined as ever to win this event, having been runner-up three times, and he still has the pace to do it. Watch out for him every time he’s on track.

Tarling is established in historic racing and his making his racing return after getting long-COVID.

Sarchet has strong form in BRSCC Northern, and surprisingly this is his first attack at the Hayes with a student team he is loving working with so far.

The 17-year-old FF1600 rookie has done a decent job in Northern Ireland and at the Festival in an older car. Bound to impress again at Silverstone on his first visit.

Hughes dominated in FF1600 at the start of his career that went up to F3000 and success in sportscars, and he’s returning to his starting place and team manager Jonathan Lewis to relive the old magic.

The former BTCC ace is taking over the car piloted by Roberto Moreno at the Festival after also being a big FF1600 name back in the day.

Son of the 1989 British Sprint champion and has been in FF1600 for nearly two decades, Ames knows how to do well in these cars and can be a Janet Cesar Trophy victory contender in the pre-’93 class.

Only four Lanans were ever made, and the man who originally designed it is running Jackson in it this weekend after they shook it down in style at a Heritage FFord round. Who knows how quick it can be?