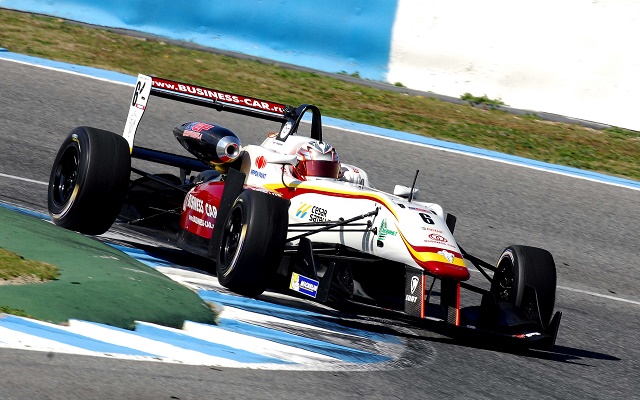 Sophomore Euroformula Open driver Konstantin Tereshchenko topped the timesheets at Jerez during the first day of the 2015 Winter Series.

The Russian recorded his best lap in the first of four sessions and, although he couldn’t improve on that laptime during the rest of the day, he remained as the overall fastest driver.

Italy’s Alessio Rovera and Japan’s Yu Kanamaru were second and third fastest at the end of the day, followed by West-Tec’s Yarin Stern and Diego Menchaca.

The opening session saw Tereshchenko and top rookie Menchaca complete a Campos 1-2 in a dominant fashion as they beat the rest of the grid by at least 1.6s. RP’s Andres Saravia and the third Campos driver Henrique Baptista were the best of the rest with Rovera taking fifth.

In the second running Stern, who is preparing for his third campaign in the championship, was quickest, edging out his teammate Rovera and EmiliodeVillota’s Kanamaru by only 0.02s and 0.3s respectively. Tereshchenko dropped down to fourth and Italian F4 graduate Leonardo Pulcini made an appearance in the top five.

Pulcini moved further up the order in the third session by going quickest, with Stern was only four hundredths off his pace. RP trio Dzhon Simonyan, Damiano Fioravanti and Vitor Baptista were third, fourth and fifth fastest but they were nearly a second slower than leading duo.

The final practice of the day proved to be the closest one as Rovera, Kanamaru and Stern were separated by less than three tenths, with Campos duo Baptista and Tereshchenko rounding out the top five.

The first event of the Euroformula Open Winter Series will conclude tomorrow with another four testing sessions.