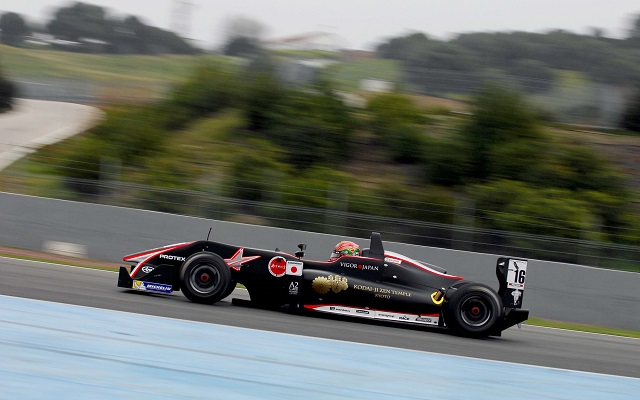 Yu Kanamaru topped four out of four sessions on Saturday to end the Euroformula Open Winter Series test at Jerez in dominant fashion.

The Japanese driver, who finished fourth last year in the regular season, excelled in wet conditions as rain hit the track in the first three outings today. Although the final session was in dry conditions, Kanamaru remained in the lead, only four tenths off Konstantin Tereshchenko‘s pace-setting lap from yesterday.

Kanamaru’s lead remained but was reduced to less than six tenths in the third session. It was Pulcini who was second fastest, narrowly edging out 2013 Formula Abarth champion Alessio Rovera, Henrique Baptista and Israeli Yarin Stern.

In the final practice of the day Kanamaru stayed in first, edging Rovera and Tereshchenko out by two and four tenths respectively while both Pulcini and Menchaca retained their regular top five places.

As this was the only dry session of the day, the overall fastest times are identical to the times set in this outing.

The Winter Series will resume on 6-7 March at Paul Ricard with two races and will conclude a week later with tests in Barcelona.