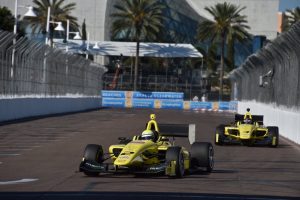 Team Pelfrey will be fielding Neil Alberico and Shelby Blackstock at this weekend’s Indy Lights opener, bringing the grid at St. Petersburg up to 10 cars.

Alberico has raced for Carlin for the last two years, with a best finish of third, and previously was a runner-up in both Pro Mazda and USF2000.

Blackstock has spent five of his six seasons on the MRTI ladder at Andretti Autosport, before switching to Belardi Auto Racing for what was his third Indy Lights campaign last year. He too has a best finish of third.

Pelfrey fielded one car for Juan Piedrahita for the entirety of last season, with new Andretti signing Patricio O’Ward joining him for the opening round.

?Simply, I want to win races and Team Pelfrey has granted me the opportunity to do, just that,? said Alberico.

?It gives me confidence to know that Team Pelfrey has faith in my ability to be competitive and to win while racing in the Grand Prix of St. Pete.?

There has been no confirmation of Alberico’s deal beyond St. Petersburg, and he may sit out the rest of the season like O’Ward did last year.

?I?m really looking forward to this weekend at St. Petersburg. This was a last-minute deal and I?m very grateful for everybody who helped out in the process of putting it together,? said Blackstock, whose deal is for the full season.

?I?m looking forward to working with Team Pelfrey for the first time and hopefully we come out of the weekend with exceptional results.?

There are only 10 cars on the entry list for the opening two races of the Indy Lights season, with Juncos Racing bringing two cars, despite signing three drivers, with ‘TBA’ listed as team-mate to current Pro Mazda champion Victor Franzoni.