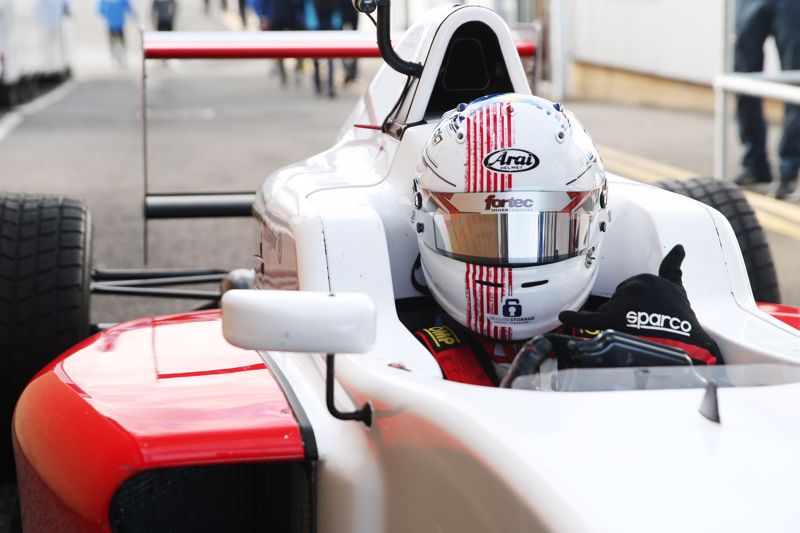 Fortec Motorsports’ Nikolas Taylor took the GB4 crown in the penultimate race of the season at Donington Park, with Jarrod Waberski claiming victory.

But it was an eventful affair en-route to the title for Taylor, who finished fourth despite an incident-filled race.

He lost the lead to Tom Mills at the start, the Kevin Mills Racing driver climbing from third to sweep around the outside at Redgate, with the pair making slight contact. Sherwood bogged down from second on the grid and slipped to fourth behind Waberski.

Mills and Taylor continued to squabble through most of the opening lap, with Waberski pouncing to move up the inside of the pair at Melbourne into the lead.

Sherwood tried to join the lead scrap into Goddards but slid wide onto the grass and dropped down the order.

Hillspeed’s Oliver Clarke took third into Redgate from Taylor, who was then involved in more drama when he ended up on the grass at the Craner Curves after contact with Elite’s Will Macintyre and slipped back to sixth.

As Waberski pulled clear to an eventful victory, Clarke and Mills collided contesting second at the hairpin, allowing Macintyre to move into second. As Mills tried to recover the lost ground, he had a further incident with Megan Gilkes at Macleans, with both retiring in the gravel trap.

The race finished behind the safety car, with Waberski winning from Macintyre and Clarke, with Taylor fourth.

Sherwood came home fifth, with Max Marzorati climbing from the back of the grid to sixth.

Graham Brunton Racing’s Logan Hannah retired with damage after an early collision, while Scorpio Motorsport’s Aqil Alibhai stalled on the grid and did not continue.