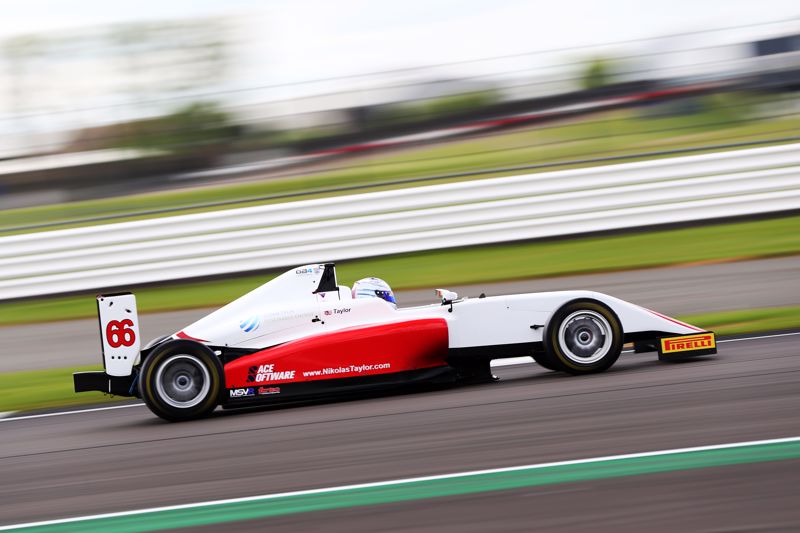 Fortec Motorsports’ Nikolas Taylor took his second GB4 victory after passing polesitter Alex Walker in the early stages of race one at Silverstone.

Walker led into Copse at the start, but his Elite Motorsport team-mate Jack Sherwood made a poor getaway from the inside of the front row and dropped to sixth.

Having moved up to second, Taylor then challenged Walker into the Vale on lap two. Walker tried to defend as the pair moved onto the Hamilton straight, but Taylor squeezed up the inside to complete the move into Abbey.

Walker remained within a second of Taylor, who had a sideways moment while trying to keep his rival at bay. The championship leader got the gap down under half a second, but Taylor responded with the fastest lap to pull away once more and eventually win by 0.818 seconds.

Max Morzarati finished a further four seconds behind in third for Hillspeed, having moved past Sherwood at the start. Elias Adestam was 0.4 adrift in fourth, the Fortec driver having followed close behind throughout.

Having lost out to Megan Gilkes into Maggotts on the opening tour, Sherwood recovered to take fifth away from the Hillspeed driver in the closing stages.

Jarrod Waberski was seventh for Kevin Mills Racing, despite an early battle with Sherwood. Lucas Romanek finished his first GB4 race in seventh for Oldfield Motorsport.

Tom Mills lost out to Graham Brunton Racing’s Logan Hannah on a couple of occasions, but the KMR racer eventually prevailed to finish ninth.